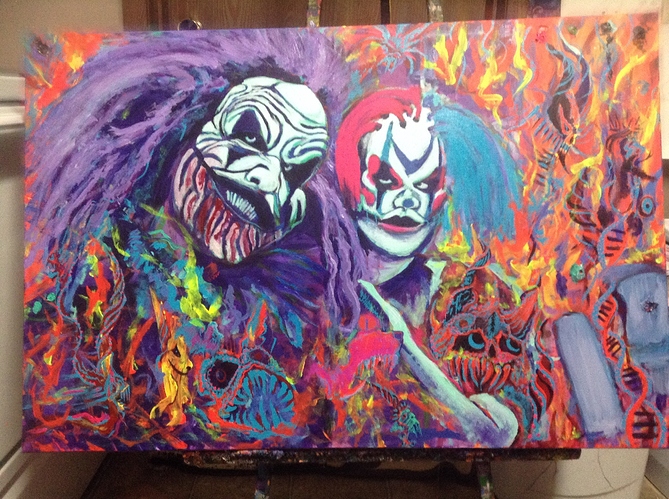 This guy at work asked me to do a painting of him and his wife. They volunteer at a haunted house each year and the money raised goes to find a wildlife refuge.

It’s good, you can see their characters in their faces.

You are so talented.

wow, that is quite a painting…really captured the gestures of the haunted clowns.

I hate clowns, but that’s a really nice/dynamic painting! Congrats on the sale!!!

Glad it is well received, thank you @everhopeful, still trying to get the details,

Thank you so much @anon80629714, it means a lot to me to be able to share this news here after the past few months

Thanx @jukebox, those are creepy masks, but they do help the wildlife refuge so I thought it would be fun to try

And thank you @Hedgehog, your art that I have seen here is inspiring, my wife hates clowns also, so when I ask her what she thinks, she says, I like the colors

Ha! Very diplomatic of her

But, really, you capture a great energy! Lots of motion and vitality without being intrusive or aggressive. Very nice!

Thank you so much @Hedgehog, it is good to get feedback, I used to try to have exhibits at galleries but could never tolerate so many people looking at what I did so I always hid during the reception

Then at the college, it became a joke like I was known as the artist with schizophrenia, and it hurt because these were people I thought were my so called friends

But I am grateful for this community

Congratulations! It shows a vivid imagination. Very scary. Maybe you could sell your paintings to Stephen King.

Thanx @crimby, Maybe I could sell him one painting for lots and lots and then leave this hotel job, if only, if only…

Oh, wow, we sound similar! During a group show in LA years ago I stayed on the other side of the warehouse literally shaking with my stomach in knots! Before that, I went to the Academy of Art in San Francizco. I was such a suicidal mess that I barely attended classes and finally dropped out second semester. No one called to see where/how I was… What else do you paint? Can you post more?

@Hedgehog yeah that was me also, during receptions I would disappear out back and smoke incessantly, and the gallery owner would get mad at me…were you able to finish your degree?

I only have this iPod with a few of my works on it, we don’t have a computer at home yet…

I can post a few paintings on my iPod, my favorite medium is oil, but right now I do acrylics because I ran out of oils

Subject matter ranges, used to do a lot of woodcuts and made political statements railing against government corruption, did a series about some of my experiences in psych hospitals, a biblical series inspired from reading the prophets, way too many self portraits and sexual crap,

But you would understand, as an artist, we grow and change…

@Hedgehog
Have you ever destroyed your own work? I have destroyed much of mine at times 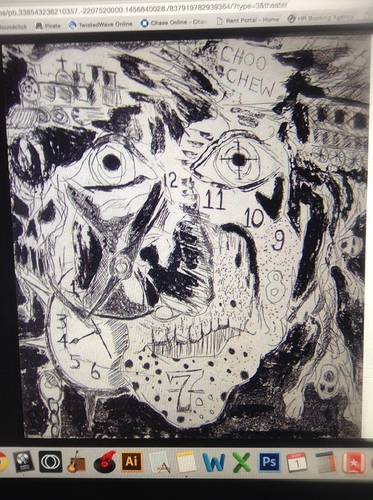 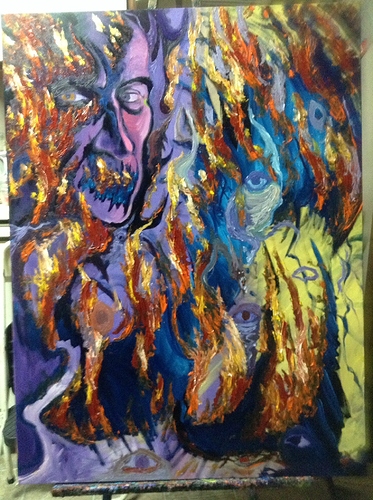 Great! I love it, wouldn’t mind having it