I wonder how many psychics thought they might just be schizophrenic at first though.

Not nearly enough of them.

chances are that if you think you are psychic, you probably are.

OMG, why is this crap not in Unusual Beliefs?

I agree, this should be in Unusual Beliefs.

When I was delusional, I felt these feelings more strongly. I still sometimes suspect that I have clairvoyance or can tell what other people are feeling. 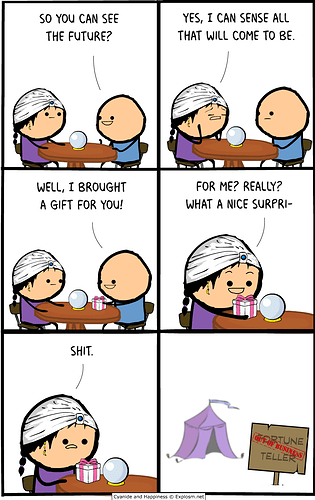 You could be slightly psychic. It’s possible. I have felt that too before. But, as a schizophrenic it’s best not to focus or become obsessed by such thoughts. It would be better to ignore it.

I am not psychic but I feel this person who thinks she knows what I think might be, I can only hear negative thoughts about myself from other people. Need a lot of spiritual protection from this person, then I think things might get better.

When I was psychotic, I swore I was psychic. People assured me that I was not.

Psychophrenia. Schizophrenic who thinks he/she is psychic but is wrong.

If we predict things before they happen it’s usually down to random chance or an educated guess based on available evidence. We can get obsessed with that kind of thing though.
On several occasions I’ve tried predicting how dice will roll. Invariably comes out as no better than random chance.

When I first was hospitalized the doctor said I was having perceptions. I’m not sure what that means. I was too sick to ask. But when I’m psychotic I feel like I’m psychic too.

Mediums are interesting as they claim not to suffer as a result of the disorder. That makes them, by scientific standards, high functioning schizophrenics. The interpretations they do on the hallucinations they see and hear are probably intuitive guesswork.

I can “sometimes” predict the outcome of events as long as people are involved, but it has absolutely nothing to do with a psychic ability. My super power is that I see the world mathematically. It’s very hard to explain because my mind automatically does it without having to think about it, but it basically places a value on every factor of a situation, similar to a mathematical equation. The most important factor of all is to make sure you add in the “human factor”. If all the factors are known, I can very accurately predict an outcome before it happens. Although…I can’t always see a potential outcome since I don’t always know all the crucial factors…but when I do see it, I have never been wrong thus far. I either can’t come to a conclusion or solution, but when I do, I know without a doubt it’'s going to turn out that way…most likely since mathematics is absolute.