I spend a lot of time thinking about the concept of monogomy. I guess I’d like to hear that there are healthy relationships out there and maybe we could all gather up our notes and inspire some hope for each other. I’m a lonely boy, hah, but I feel I’ve pondered enough about it that I might have something to add.

I’ve got a lot of friends, each one of them has their perspective on relationships. Some are possessive, some are wary to enter relationships but still get some play, some totally disdain women, some entertain relationships just to get some action, and then all of my college buddies except for me and one other are espoused in very strong relationships. Kind of missed out on that band wagon, but my kind of girls weren’t really occupying the hickish, kansas, college town that I attended.

The real disheartening thing is that a lot of us in our twenties here are still ■■■■■■ up from our first serious relationships and it makes it difficult to trust anyone. It’s a mess and it sucks.

From here I can only go into my personal experience. I met a girl I really like, and it’s been a mind-■■■■ and a half trying to resolve all my distrust issues and insecurities that I was left with when my first and only real relationship ended 5+ years ago. It’s like time doesn’t heal that wound, you have to get close to having the same situation before that damaged part of the self even resurfaces.

So many people are giving up on even seeking out healthy relationships entirely… which is sad because it’s a very beautiful and fulfilling concept to me. I know I was talking about polyamory a few months ago, but that idea has grown distasteful to me as I realize I am very much a single-minded person in regards to love. When I meet a girl who fits that slot… that’s the only one I want to be with. Entertaining any other just makes me miss that primary girl in my mind.

It’s a personal choice at that point, to just hold out. I don’t like supporting the world of casual sex. I don’t like supporting the minds who have seemed to sell out to it. I understand it to an extent. Individuals enjoy sex, they don’t trust anyone long term or are too unimpressed or unsatisfied to remain loyal… It’s when people start making really general statements about it though that bothers me. Statements that indicate every man/woman wants to cheat and sleep around and no-one should be trusted. The overall culture gets contorted to pull some folks away from having faith in the concept of monogomy. Some of us aren’t so vain in that regard to need all the sexual activity to be fulfilled and I think that there are a great many people out there who know that lifestyle goes nowhere… at least for a lot of people. So I’ll stand against all that as best I can in my personal life.

I’ve met some very misogynistic men. It’s surprising who they are. Even sensitive men who like to see women as accessories and don’t give them the full respect they deserve as human beings… and I have some theories as to why. They don’t understand them and they hate being rejected by them, so they just belittle the relevance of women entirely instead of facing the fact that they themselves need to learn to be less stubborn and dominant and self-righteous…

Unfortunately though, women can be pretty cruel all the same. Equal amounts of misunderstanding and lack of concern.

This statement applies to things beyond relationships… but the more emotional chaos one experiences the less sensitive that individual becomes to someone else who is in a state of emotional chaos… now that is very broad. The last thing I’m going to to is clear up what I mean by that.

First, I’ll say that the opposite can also be true. It takes someone who has experienced the pains any individual might be going through to really have empathy and share the burden and break the lonely struggling down just a bit.

Going back to relationships though, the concept that someone is heart-broken… you get over/away from heart-break and you most certainly don’t want to help an ex/partner unravel the mess of what all that is, because you’ve sorted it out for yourself to the point you just want to ignore the damage of your past and would rather not be reminded…

that’s going way out on a limb and I’m not really satisfied with all the uses of “you” and “your.”

Still these are the speculations I’m currently having. I don’t know how valid any of them are.

My love life, a short story: 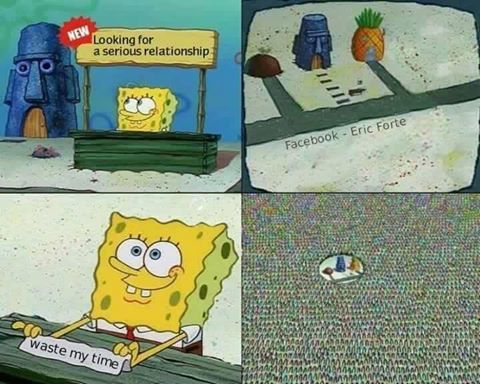 I think, unfortunately, that is the case for far too many.

It’s funny people get jealous of good relationships… and in response they just trash the concept… sometimes anyways… some people.

I never had a trully healthy relationship. I’m not waiting or doing anything to have it either, I just feel that when I’m ready it’ll show up

I’m sure it’ll work out… I do meet good men out there… Though they seem as scarce as good women.

I’m glad to see there are so many good people on here.

I guess this song sums up my love life:

Honestly, I’ve been in a long term for far too long. I love him A LOT. and he hugs me, my stress melts away. He is sent from heaven, in other words. But I’m not satisfied. I want adventure, fun, craziness etc. I wanna be single and since I can not have kids, I can be single my entire life. But this is life, you meet someone, it’s fun and crazy at first, then becomes boring, then turns into a friendship, then you just take care of each other and have a comfortable life. C’est la vie.

It’s just monogamous relationships are hard work. One way or another, you’re gonna like and fall in love with someone else. At any age. People want to have fun in general. Excitement is a big deal. Some people are just more cut out for this type of relationship. Me, I don’t think so but I think it is best for me especially because I have an illness and I love him a lot. You just need to make peace with your life and love just comes unexpected at anytime.

I am just going to write that yes, relationships are all very difficult and individual.

The following is a general opinion:

One of the key problems misogynists and sexists have is that they see women as a group “women can be…” Please substitute in any other group of people to understand that generalization is in itself a form of prejudice, of seeing an individual for group membership rather than for herself. No group is homogenous in their qualities, actions, or tendencies.

As much as one woman or five different women [or one man or five different men] might have hurt a person, while those wounds are real, to ask an entire gender to carry that is maybe one of the reasons it’s hard to get into a relationship. My goal is to attempt to see each person for her or himself first, not male or female or any other group membership. Maybe that will help relating in general?

I don’t know; I just know that the moment anyone starts talking about a group I am in as inherently different and lesser or worse, I just shut down.

You’re right, of course, that old wounds resurface in new relationships. People tend to be drawn to one another based on our unconscious patterns and lifelong needs, along with the fun, interesting, and conscious stuff.

That’s all you need to know about relationships.

Mr Turtle and I have been together for nine or 10 years (I can’t remember).

We were good friends before we started our relationship and we’re best friends now.

He is staying at home with me today because I have been suicidal and he is on suicide watch.

I live a long distance from my family and Mr Turtle is my primary caregiver. I think it’s a bit of a one sided relationship because I don’t feel I contribute as much to it as he does. But I love him none-the-less.

When I was little, I asked my stepdad why he called my Mum ‘mate’. He told me it was because she is his best mate. I learned then that that is what monogamy and relationships is all about. Friendship.

I’ve been in a relationship with my partner for 8 years. We started out as friends but got together after knowing each other for a number of years. She is my caregiver though she works a lot and recently got angry with me for skipping two days of meds.