I’m thinking of making a ‘Captain’s Dinner’ tonight, the basis of which is the marrowfat pea. 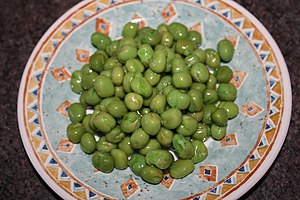 It goes with lot’s of sides, like fried onion rings, sausage and bacon, a great variety of pickled stuff, mustard and piccalilly. Typically ingredients that can be preserved reasonably well. Traditionally, this is a dish for sailors, pirates and other sea dogs. I’m none of these but will make it anyway, Arrrr!

I hate them! Get them out of my sight! Yuuuuuuukkkkkkk

not that much of a fan of peas, beans, maize, beetroot or celery.

love tomatos, carrots, paprika, cucucumber and salad though. also rice, oats and potatos. everything else is not on my consumption list.

trying to switch to a full-on meat and fish diet with 0 carbs but was not successful thus far due to a lack of motivation and lack of mental control over my body and feelings.

i did endure the diet 2 weeks though, and lost like 3-4 kilograms. its not that hard when you got the motivation and feel alright in the head.