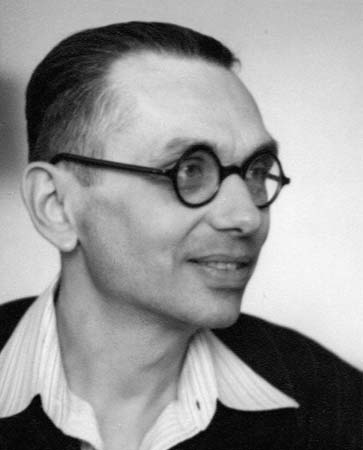 Kurt Gödel, Austrian-born mathematician, logician, and philosopher who obtained what may be the most important mathematical result of the 20th century: his famous incompleteness theorem, which states that within any axiomatic mathematical system...

“As Gödel aged, he grew more and more paranoid and eventually became convinced that he was being poisoned. He refused to eat unless his wife tasted his food first. When she became ill and had to be hospitalized for an extended period of time, Gödel essentially stopped eating and starved to death.”

Sounds like psychosis but considering his age, probably not schizophrenia.

Well, at least he wasn’t overweight.

How awful to suffer like that! Poor man! It’s awful to starve. It really is.

Eating disorders are very easy to acquire. Experiments done in the 1950s where soldiers were put on a very low calorie diet showed that most of them started to exhibit anorexia psychological symptoms, e.g. collecting recepies, starting to get obsessed with being too fat, researching specific ingredients of food etc. The researchers came to the conclusion that restricted eating alone can trigger an eating disorder even in the absence of any preexisting psychotogical vulnerability.