KFC is some good stuff

They’re selling chicken crack. Got a bucket for dinner and just finished the rest now. I’ll be dreaming about it tonight. Yum

Haven’t gone there in a while! Maybe I should go there next Friday!

But not very good food at all for your health!!!

I dropped $32 on KFC just last week…got a 12 piece bucket with large 3 sides…two sides coleslaw and one side potato wedges…can’t beat it !! I always get original recipe.

KFC is not good here. Even my carnivore friends do not like it

I think KFC is kind of healthy, mostly chicken which is healthy, a little flower, some grease and you got all the makings of a balanced meal with protein, carbs, and fat. Only thing I don’t like is that they don’t have a single veggie on the menu

When you eat KFC food, you’re eating A LOT of lipids and your ending up eating the equivalent of at least 2 meals in term of kcalories!

aww don’t be hating my KFC !! haha…fried chicken isn’t for everyone.

I was just checking the price differences between KFC and Popeyes, and I ran into McDonald’s McGangbang instead.

Can’t wait for the children to grow into full sized adults.

They have good cole slaw. Here KFC is kinda bad. I go to Popeye’s when I want chicken. I get the breast take off most of the crust so it’s pretty healthy.

I went to the KFC drive through a couple of weeks ago. While I was pulling up to the drive through window, a rooster crowed really loudly.

I was so startled so I asked the cashier if she heard a rooster. She laughed and said the house on the other side of the fence by the drive through had chickens.

For a minute I had thought that the rooster crowing was a figment of my guilty conscience about eating KFC.

Kfc is my personal crack for sure…Can’t do worse than fried chicken!

I like a lot of food but most folks don’t fry chicken like they do …11 herbs and spices bullshite…I don’t care!

We had KFC last week while we were on vacation – our family nickname for the place is ‘Dirty Bird’. We love their chicken but can’t understand why – in Canada at least – their side dishes are so horrible. Potato salad…gross. Coleslaw…mediocre. Macaroni salad…gross. French fries are so so. Their gravy is good, but it would be nice to have something decent to put it on. Why can’t they serve biscuits and mashed potatoes like the KFCs in the southern U.S. do?!?

KFC used to be good around here, unfortunately they had to close 2 out of the 3 stores due to lousy food.
When done right - like follow the original recipe, it’s the best.

For now, Popeyes have been getting our business.

Here where I live there are almost no KFC because it’s not popular at all. Here, KFC has a reputation of making the worst junk food and the worst disgusting meals. Everybody believe that. KFC really has a bad reputation here. Even McDonald’s is not so much popular. Junk food restaurants that make more healthy foods are a lot more popular, like Subway for example. And we have many junk food restaurants that are more popular than KFC and McDonald and that only exist here. For example, Fusée, Ashton, ThaïExpress, ThaïZone, Pizza Salvatoré and many other local small restaurants.

But we also have many great restaurants that make wonderful high quality meals and that is not junk food and it even doesn’t cost so much.

I remember when I went to a trip to Miami in 2002. We used to stop to eat in restaurants in USA and we were only finding disgusting junk food restaurants. When we were coming back from our trip, we were totally sick of the food we have been eating for 1 week. During all the trip, we only found 1 restaurant which make decent food, I think it was in Albany, NY.

I really don’t know how you can love KFC!

They don’t have biscuits and mashed potatoes? Omg why even go, then? I couldn’t figure out what your issue with the side dishes was until you shared this disturbing bit of information

You’re right. Not everyone likes to eat KFC, but I know some people just don’t like it. So, just eat what you like.

By the way, I’m hungry now.

We’re going to have to have you join Kentucky Fried Chicken Anonymous. It’s finger licking good.
Withdrawal is a bitch.

Omg why even go, then?

Because our houseboat had a kitchen and I made my own mashers and biscuits. AND sweet corn. It’s a bit different to get fast food by speedboat, then car, then speedboat again.

We just really wanted some KFC. 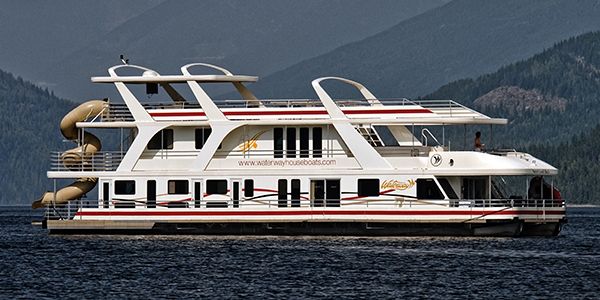 Wait holy Moses is that your boat?