Is this 'Magical Thinking'?

I have just joined briefly to ask a question as I wondered if I had been misdiagnosed and have Schizophrenia?

Ok so the last few years I have been reading about reincarnation and paid for a session with animal communicator after my dog died. They told me my dog would come back into my life. It’s now been a couple of years and no new dog has appeared in my life. However this isn’t the main issue its that the thoughts of reached a point where I believe she sends me signs from ‘Rainbow Bridge’, if tehre’s a feather, rainbow, coin, robin in my path its a sign from my dog.

When I had a quite serious medical issue I believed my dad took over my thoughts and told me what to do (he was a paramedic when he was alive) as I have a phobia of hospitals that they’d keep me in and lock me up. If its stuff like daily routines when to wash/cook my mum tells me what to do (she died in the 90’s!) by sending thoughts to me.

I have different persona’s that present in different situations but only a couple of stable one’s (one will be created then be the main host for years) while my true self can only come out when no-one is around and I’m home alone. Some things I can’t do when others are watching.

My thoughts now are quite excited about imagining I’m the sole survivor of an apocalypse and that’s why no-one ever visits or talks to me (I have severe difficulty relating to others, never had any interest in sexual relationships and don’t enjoy physical contact, never married, had kids and nearly 50).

I was encouraged as a child to ‘hide’ the fact I had ‘my own world’ as it wasn’t considered normal I was eventually diagnosed Autistic which seemed more acceptable than being classed as ‘mentally ill’. I’ve never had any anti psychotic meds in my life.

I read that Schizophrenia can exist comorbidly with Autism and wondered if this would explain my symptoms that weren’t typical of Autism? (or whether one of my persona’s read about autism, decided that would be more socially acceptable then answered questions in the diagnosis process to get the more acceptable diagnosis as there’s no medications to 'cure Autism. Does this sound like something someone with schizophrenia would be capable of for self preservation reasons?)

Hi! Nice to meet you

So you have already a diagnosis schizophrenia or autism?

wondered if I had been misdiagnosed and have Schizophrenia?

We are not doctors here. Very rarely doctors misdiagnose patients. You should trust your psychiatrist.

Autism as well as Schizophrenia DX'd - Other

Have any of you be given an autistic as well as Schizophrenic diagnosis? Here is a copy of some of my medical record. [image]

Check out this link @Kahuna

What does Psychosis NOS mean pls? I was diagnosed as High Functioning Autistic years ago.

I have diagnosis of High Functioning Autistic. I was born with my thyroid not working had epilepsy as a child. I’ve always been said to ‘live in my own world’ and had difficulty making friends. Severe daily bullying at secondary school led to my first ‘persona’ being created. They all have different abilities/disabilities but are all autistic to some degree, though my last one was in complete denial and never told anyone they had Autism.

why? they’re only human and they only saw what I wanted them to see on which they based their diagnosis!

I do believe from what my parents described that I had autistic symptoms as a child, however I have no memory of my childhood past 7 yrs old due to the epilepsy (I believe my last seizure was at that age).

I never discussed with the psychiatrist any persona’s/imaginings or belief’s they just simply did a test asking questions solving puzzles etc then reached the conclusion the tests indicated I was autistic. What they weren’t aware of though was that I’d studied Autism for the last year before at university and done work experience with people on many different parts of the spectrum and already knew before taking the test which parts an autistic person would struggle with and which they’d be better at.

I’ve always suspected I was ‘mentally ill’ rather than ‘learning disabled’ but it carried such stigma and because my parents had told me to hide it because they felt people wouldn’t understand and would be even more cruel, it’s always had to be a secret.

Thanks Formalname…for some reason I’m not getting a copy of the person’s quote I’m replying to so its getting confusing that my answers are just appearing under each other with no reference to who I am answering (though I clicked reply directly on their post)…is there a way to quote that I am missing? Thanks

As i was reading i thought this is me right before my schizophrenia. I communicated to the chineez with telepathy. I think i never would have developed sz if i had stayed that way…just spiritually opened. BUT i started with all my heart loving and wanting to communicate to satan.

And then i had my first psychosis. I saw satan.

Anyway what I wanted to know was whether the thoughts in my original post would be classed as ‘Magical Thinking or delusions’ as I don’t understand what they mean by delusions?

I don’t think I’m god or some kind of super hero or anything but is believing your dog could reincarnate or sending you signs from them classed as delusional thinking?

I mean people who are generally considered ‘normal’ believe in god, angels and heaven, and this is accepted as normal or religious beliefs. I tend to be very literal so I’m struggling to see what the difference is between it being acceptable to believe your parents are angels looking out for you from above (my mum told me she always would be, she died when I was younger) and if thats acceptable …why is then different if you believe they are communicating with you or your deceased pet is etc?

I’ve never believed in Satan or understood ‘God’ making the world in 7 days. It’s only recently I started trying to understand reincarnation but I feel with my very literal way of translating things I’ve misunderstood.

I guess I’m wondering if ALL my issues are part of the Autism or if something else is going on too (mentally). Hypothyroidism can cause psychosis so it could be possible. My GP has only ever prescribed T4 and refuses to add T3. Interestingly its when I’ve bought T3 myself (its legal from other countries for your own use same as natural thyroxine) that I’ve become more aware mentally and more ‘with it’ and started thinking about these things.

is there a way to quote that I am missing? Thanks

ahh!!! …so if it was Psychosis NOS would this mean Doctors didn’t know exactly what condition you had , just that you had SOME form of Psychosis?

so if it was Psychosis NOS would this mean Doctors didn’t know exactly what condition you had , just that you had SOME form of Psychosis?

Well, this is the name of it. Psychosis not specified. I didn’t said that you have this disorder. I’m not a doctor and i don’t know if you have or not at all schizophrenia. You should wait for better answers from members who know better than me. Peace

Hey, @Kahuna. Welcome to the forum. Believing you can communicate with dead loved ones, or that they send you signs from beyond the grave, is a very natural and normal response to grief. Almost everyone I know who has lost a loved one believes this to some degree. It isn’t a problem unless it’s negatively impacting your life. If you’re changing your behavior and doing negative things based on what you believe your parents or dog are telling you to do, then it’s a problem. Otherwise, it’s just a way for you to comfort yourself.

When you talk about other personas who take over your body, that makes me wonder if your doctor has ever mentioned Dissociative Identity Disorder, more commonly known as multiple personalities. We have a few users here with that condition, and the way they describe their experience is very similar to this.

When you talk about other personas who take over your body, that makes me wonder if your doctor has ever mentioned Dissociative Identity Disorder, more commonly known as multiple personalities.

No Doctors ever mentioned it because I’ve never told anyone I have different persona’s as I was told to keep certain things such as ‘talking to myself’ as my parents believed I was doing at the time, to myself and encouraged to do more normal things that other kids were doing.

I have thought of this though as I read Donna Williams books Nobody Nowhere and Somebody Somewhere she was a famous autistic author (since passed away I believe) and she also created persona’s (though far more than me)to cope with life and everything she found too overstimulating etc. She talks about it on her blog if you have never read her books. 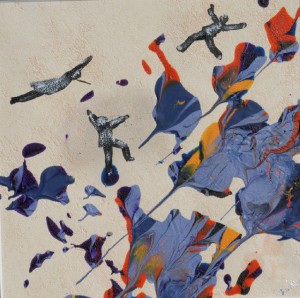 Dissociative Identity Disorder is on the same spectrum as Post Traumatic Stress Disorder (PTSD). They are both DISSOCIATIVE disorders. Those who develop DID have over developed abilities in dissociating, a skill very commonly overdeveloped in...

I did think of this but as I have only have a few alters’ as they call them throughout my life, if it is that it must be one of the much rarer types such as Sequential MPD - “When an alter emerges it takes over for a long period of time before the next alter takes over for another long period of time. While one alter is out, the others go dormant”

Atypical also matches where alters are aware of each other and work together to portray one personality.

From what I’ve read MPD typically has at least 8 different persona’s and some people many more. I watched a program on it last week but didn’t feel I could identify with the people as mine’s not exactly the same and doesn’t happen like that. so I’m not sure. It could be the Autism could shape the MPD and influence how it develops if it was a result of the Autism rather than early childhood abuse which seems to be the cause of most typical cases of MPD? My need for sameness (in routines) and dislike for constant change could have influenced why once one persona developed it didn’t keep changing constantly???

I strongly recommend being totally honest and open with your doctors. Their job is to help you, and they can’t do that if you’re hiding things from them.

I have different persona’s that present in different situations but only a couple of stable one’s (one will be created then be the main host for years) while my true self can only come out when no-one is around and I’m home alone.

Severe daily bullying at secondary school led to my first ‘persona’ being created.

Having different “personas” is not a symptom of schizophrenia. It could possibly be a symptom of Dissociative Identity Disorder (DID).

Consult a psychiatrist about your symptoms and they should be able to evaluate you and propose an appropriate treatment plan.

Having different “personas” is not a symptom of schizophrenia. It could possibly be a symptom of Dissociative Identity Disorder (DID).

ok then Thanks…I’ll leave now just wanted to rule it out.

@Kahuna. It’s really important that you consult a psychiatrist and to be honest with them about your symptoms. Good luck!