I had my evening walk and I took a photo, lakes are still frozen, back in 1865 (or so) lakes were frozen still in June and as a result of this many people starved to death, of course we are living in the modern world now, I also saw my friend, he has been in our psych ward for many months, normal people do not talk with him, but I like to chat with him, he has these religious and political delusions.

Here is a photo … 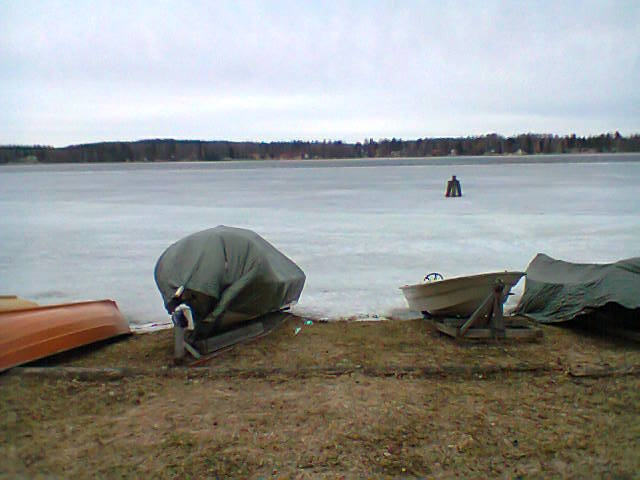 dont remember where i read it that russians believe we are entering a mini ice age.

Maybe, just today I saw new Russians in my little town, I see many things when I ride my bicycle and go to stores to buy food …

Russians may be right indeed, it is snowing now … 9 years at this time it was +20 C … mini ice age may be coming … does not bother me … I ride my bicycle when it snows, rains, sun is shining and so on … I think I have my morning walk tomorrow in snow … difference between me and Russians is that I do not drink vodka or any liquor …

its amazing russia is so close to u , do u ever visit russian border towns?

perhaps they are right artcile telling till 2030 mini ice age results will be visible.

I have not visited Russia, but I was a couple of times in the Soviet Union. There are some articles that many Russian villages have no young people, The male life expectancy is 59, no women and males drink a lot in the same way the trend appears to be in my little town, but not so much. We just have many single men who need women.

we had a village in greece with the same problem no women!!
they went to bulgaria to find women :))

Yep, that is a problem. Some men in my little town have married Thai or some other women. I met once one single man who said he was selling his place and going to Ukraine or somewhere because he seemed to be very depressed that he had not found a woman.