I feel people are annoyed cuz I talk too much

@daze it’s not our faults we were born in June. 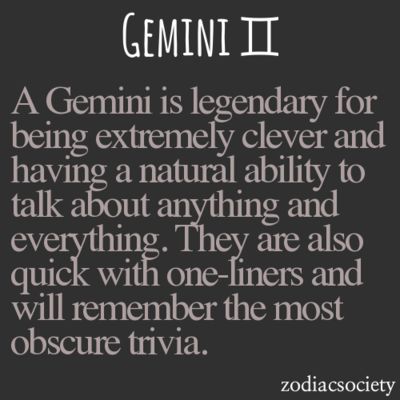 Astrology could be a self fulfilling prophecy. I used to be real quiet til i found out geminis were the most talkative sign. Believing I was talkative made me more talkative? Part of my questioning of the validity of astrology! But I’m glad because the air signs along with Pisces are the best signs IMO. … And wouldn’t trade it.

Do you think you talk too much? Is that meaning that there is a median for the “right” amount of talking? And do you mean people here?? …

I’m still not a fan of zodiac stuff! But I had to indulge anyway.

Pisces is a great sign. Theres a reason they made Jesus the fish, because Pisces is the most well rounded sign. Even though geminis and Pisces supposedly clash, I acknowledge Pisces mightiness. All signs are good though. It’s not all pretty being a Gemini. We are very fickle, most often sign to be diagnosed with bi polar!!! I think astrology is great literature. I read a 500 page book on astrology and it was the most interesting book I’ve ever read. Great literature. It’s very ungeminilike to read 500 page books, but daze may be an exception because she is a bookworm

take it all with a grain of salt but I thoroughly enjoy the subject. I don’t think me and daze would get along so well if we weren’t twin twins

Ai dios mio! Too much words.

I tend to think that the suggestions are what feed themselves into the persons who are reading it.

But I like the pisces stuff so much that I say “bleep that”!

I got the talking out of my system. 20 min conversation with my sister on the phone. Phew. Feel better now. I will shut upnow.

With some online folk I can go for hours without realizing it. If I hold it in though - look out! Head gets warm and its like a burst of energy that is begging to get out and [light beams and laughter].

The twins - Gemini’s have always made a huge impact in my life. Especially the women.

@chew Just bumping up again as noticed a Gemini

I used to get chided for being a Gemini mostly by chicks that would throw the hex sign up there as though I was bad boyfriend material. I guess Gemini are supposed to be two faced and I was a little two faced. Now i spend birthdays with my family and no one ever mentions the fact that Im a gemini.
I miss those days

The only ones that would think gemini are bad boyfriend material are those incompatible. Like aquarius and gemini are both very social so they go well together. Libras are balanced and geminis are erratic and opposites attract.

Geminis are masculine so they do well with the fire signs too.

We suck at water signs though.

I bet all the hot artistic chicks are water signs. I never did well with them

Nah a lot of the hot artistic rebellious tatted pierced girls are aquarius. It’s easy to identify an aquarius. I don’t do well with them either but I’m supposed to. Maybbe SZ throws us off balance more than we should be

maybe so, i think one of my twins got crushed by a falling boulder or something cuz Im not even a real Gemini anymore

im a minotaur now. A beast that inhabits the afterlife, and guards the labyrinth.
I.E. my bedroom

If I were an artist. And trust me I’m not. I would draw pictures of my real life impression of each sign. And make it all groovy and artistic looking. The aquarius girls are always tatted and crazy. And I’ve always been attracted to that.

If you are intelligent you wouldn’t believe in horosco crappp

Its better than having alogia