The Mensa IQ test is culture and language neutral. You will be given 35 problems within a 25 minute limit. Since the test has not been standardized according to professional standards, the results should not be confused with a result...

I’ve scored anywhere between 90-140 according to online IQ tests. What a joke. My scores fluctuate too much. They depend on how I feel and my mood. I never had a real IQ test, but I’d image it’s above 100 even today. Maybe 110-120 if I had to guess, enough to do calculus and programming and such. 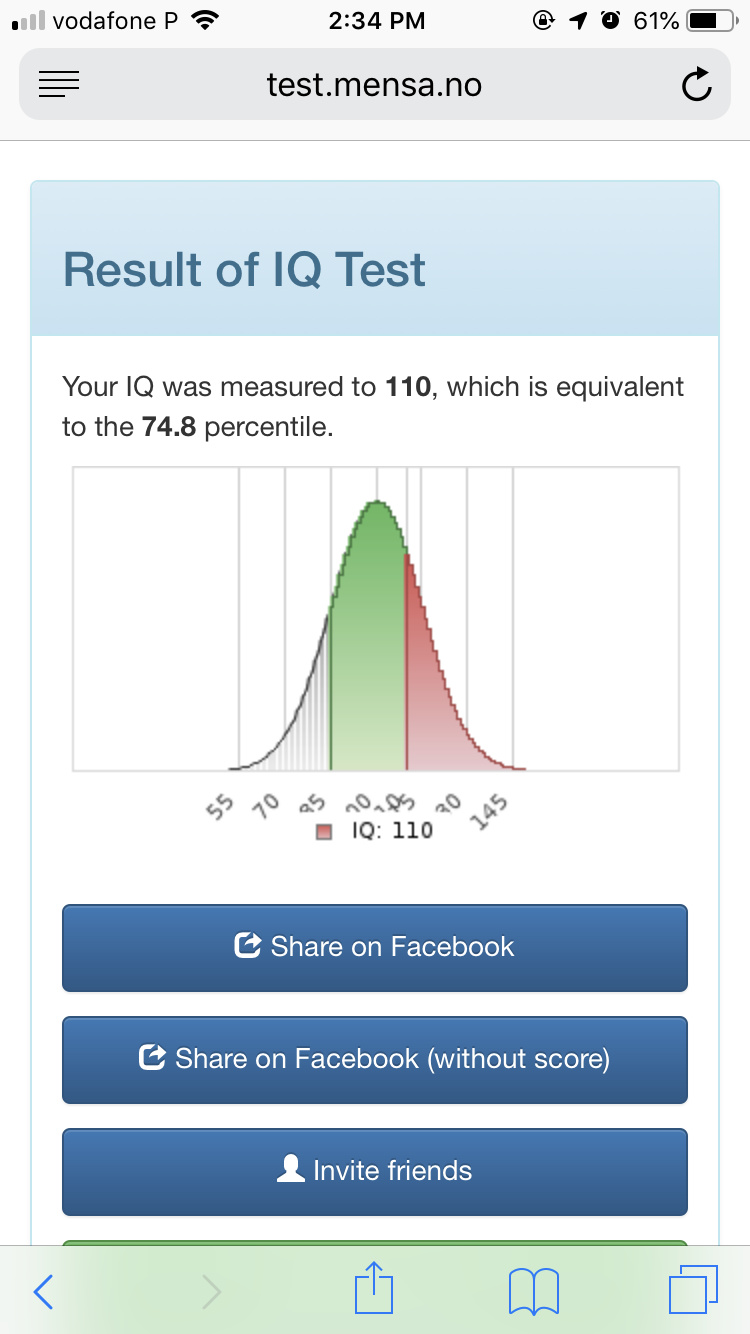 The Mensa is a good test, not happy with the outcome, people were talking to me while doing it. Blah I also didn’t finish it I finished 25 out of 35 problems

I think a good rule of thumb woule be to deduct about 10 points from your average score on online tests. Not only are they inaccurate, but they seem to pretty consistently overestimate your IQ.

I’ve had a real IQ test and my real score was about 10 points lower.

Some people swear by that Mensa Norway test. However for me it inflates my score for that kind of test by about 30 points.

Some people swear by that Mensa Norway test.

It might be fun but it’s really just another inaccurate, self-administered online test with poor norms. It would never be used clinically.

Mensa does give it some credibility. I didn’t read correctly and only thought it was 25 questions… doh

Mensa does give it some credibility

Just to people unfamiliar with IQ tests. The real deal is completely different. It is valid and reliable. This is not.

Iq tests also Mensa ones i find them difficult. I can’t get past a certasin iq score lol

The truth is most of these online tests are dubious but some are of reasonable quality. I think it’s inaccurate to make a blanket statement that all such tests are woefully inaccurate. Whilst most overestimate intelligence some may actually do the opposite.

I’ll agree with you there as the test it’s self says it’s not a true iq score, but I enjoyed the test anyways

I think it’s inaccurate to make a blanket statement that all such tests are woefully inaccurate.

I can see how it would look that way when you haven’t ever tried to administer an IQ test or read any books about them. But it’s actually a very safe bet that this Mensa test is so psychometrically inferior it is practically useless in any professional setting.

The last version of the WAIS, for example, was in development for many years. It took millions of dollars to develop, and thousands of people were tested with the full test to create the norms that the IQ scores are based on. The test kit costs a few thousand dollars, if I remember correctly, it takes about two hours to administer, and you need several years of education in addition to long WAIS-specific courses to administer it.

This is almost like comparing a sundial to an atomic clock. They both tell you something, but one is useful in today’s world and the other is generally not. But sundials are still fun.

One way to test the accuracy of ‘free’ online tests is to take some a number of times, giving answers in different ways. I suggest three ways. First, try to answer the question correctly; then try to answer it incorrectly; then answer it randomly (use a table of random numbers). If the score that it computes for you does not overwhelmingly correlate with method of answering that you used (I’d suggest using each method 5 times, done in random order),
you have pretty good evidence that the tests are not accurate.

Took it again and finished all the questions. Is that cheating? 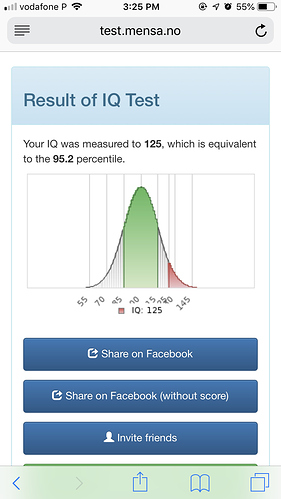 I didn’t say they give you answers at random. If you read my previous post, you can see I said they both tell you something. It’s just that they aren’t reliable and valid enough to be useful. Not sure why you’re being so argumentative about this, firemonkey.

Of course one problem with that method of testing the accuracy is if you have little idea what’s definitely an inaccurate answer. A situation that occurs with me when it comes to non-verbal tests where most times I’m taking a wild stab at an answer.