Fate of Ancient Canaanites Seen in DNA Analysis: They Survived

It is funny, more reason for me to take the DNA test =) 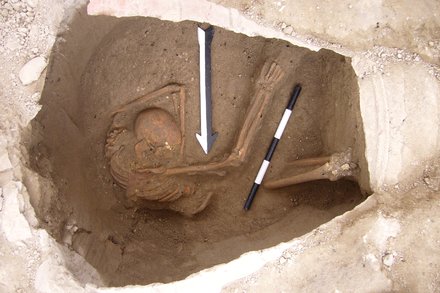 Fate of Ancient Canaanites Seen in DNA Analysis: They Survived

A study of ancient DNA recovered from remains found in Lebanon contradicts a biblical story that an ancient war wiped out the group.

There is a story in the Hebrew Bible that tells of God’s call for the annihilation of the Canaanites, a people who lived in what are now Jordan, Lebanon, Syria, Israel and the Palestinian territories thousands of years ago.

“You shall not leave alive anything that breathes,” God said in the passage. “But you shall utterly destroy them.”

But a genetic analysis published on Thursday has found that the ancient population survived that divine call for their extinction, and their descendants live in modern Lebanon.

I found this really interesting when I read about it the other day.

It is interesting. I am sorry but the bible stories are probably all made up
But still our ancestors I guess had some legit reason for this. I think it is even much more bizarre that scz have religion as almost complete part of the illness. How so? Why not think you are a plant for example instead of a historical figure.

scz have religion as almost complete part of the illness

Actually sczs in countries like China or Japan have far fewer religious delusions than their western counterpart. It depends on the culture, education etc…
And my delusions were only 20% religious and 80% sci-fi.

My lack of religious upbringing then is no surprise that religion is 0% of my delusions.

I’ve heard some of those genetic tests aren’t scientifically viable. You’ve got to wonder about many a money making enterprise. ( identical twins genetically with different results! ).

Yeah it just seems a little iffy. They would have to take thousands of DNA tests from each location in the world analyze every little peice of the DNA and record it correctly and accurately. I mean it’s possible that they did that but I highly doubt they are that extensive.

They would have to take thousands of DNA tests from each location in the world analyze every little peice of the DNA and record it correctly and accurately.

How do you know this? Did you study DNA analysis? Don’t you think these researches who studied it would know whether their methods are reliable or not? This doesn’t seem like an example of a politically motivated piece of research or of incompetent research. But then I didn’t study DNA analysis, so maybe I’m wrong.

I’m saying if they actually did all the research and formed a complete record of the differences in DNA in every location in the world then yes you could have an accurate system. All I’m saying that in the early stage of this being a commercial commodity I don’t myself believe that they have a complete archive of every difference in DNA and location. It’s something that time will make more accurate and indepth

I’ve heard some of those genetic tests aren’t scientifically viable.

They are viable at the continental level ie distinguishing European from Asian ancestry,for example.

They are not so viable at the sub continental,regional,level. Distinguishing French ancestry from German for example .