But i know its bad for people with sz, because they already have much dopamine.

but the point is, do YOU ACTUALLY feel good about the increased dopamine in sz?

i will go off meds in a month and hope the extra dopamine actually makes me feel good 24/7.

When I was apparently my most psychotic, I felt very high at times, though not necessarily in a positive way. Active and confident maybe, but not happy. However, I have tried Adderall before, and I can definitely see a Connection in the two mental states.

That’s different parts of the brain that the dopamine works on.

We have elevated dopamine in the wrong places. It’s not like we have too much happy chemical in the happiness center of the brain. We have too much dopamine all over the damn brain. The meds these days target the parts of the brain where dopamine shouldn’t be more accurately than the older medications.

Do not stop your meds and take Ritalin instead, trust me, you will be in the mental hospital if you do that. If you’ve never been, they’re not fun.

I study this stuff in school, believe me, stopping meds and going on Ritalin will not do you any good. You will suffer if you do it.

@mortimermouse thanks, great answer, cleared up a lot of things, about the parts of the brain and the meds.

i’m not going ritalin when i stop meds, maybe i wasnt clear, i will just go off all the drugs. been in mental hospital for 2months 2 weeks total.

but one thing, when i was “psychotic” for the first time, i actually felt great, “spiritual”, etc… but then i smoked weed and started to get heavily delusional. is it possible if i stop meds to feel that bliss again? it was the most awesome thing in my life to this point. ofc i wont smoke weed.

You do not want to stop the meds. You won’t be happy, you’re addicted to the meds, you just don’t know it.

Do not stop taking the meds unless your doctor said so.

Please do not go after a high you felt whilst in an altered state of mind. That is called “chasing the dragon” and kills people.

you’re addicted to the meds,

that’s not my fault, they made me take it

Do not stop taking the meds unless your doctor said so.

he’s ok with it, we’ll see how it works out to live without em.

Please do not go after a high you felt whilst in an altered state of mind. That is called “chasing the dragon” and kills people.

that makes me sad. i’m reading a book about spiritual emergencies and it said a lot more about my “symptoms” pre-weed than the classical sz symptoms. it says that this is a process i must go thru to heal myself, and i will become a better human being after it. 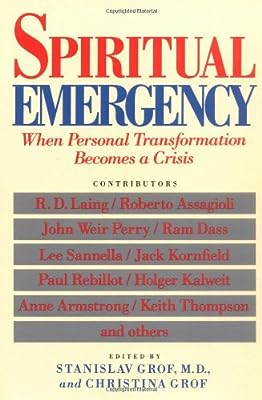 From Spiritual Emergency to Healing and Rebirth Increasing numbers of people involved in personal transformation are experiencing spiritual emergencies — crises when the process of growth and change b ...

i really wish this works out. but when i start to get “symptoms” my family will probably medicate me again and i will never be healed.

i really wish this works out. but when i start to get “symptoms” my family will probably medicate me again and i will never be healed.

Taking medication may very well be part of your healing, or a consequence of your healing, also from a spiritual point of view. In my first period I had been delusional for over half a year, it was very much a process I went through myself, for I kept everything to myself and nobody noticed strange behavior. At some point I came to see myself as psychotic unassistedly, it wasn’t imposed upon me, but I rather chose it as the least distressing interpretation of my experiences. Was the toughest thing to convince myself of really, and I will probably not do anything as difficult (nor as rewarding!) as this - which can make me sad at times. The process of coming to see myself as such, to me, was very much the spiritual awakening of my life. It was something I needed to work on, an interpretation I needed to establish, it was not like my delusions had subsided just like that. But it changed my whole outlook on the world and myself.

you’re addicted to the meds

I know I am. When I get off the med’s I experience intense anger.