I am starting to think that they want us all on so much medication that we do well for ourselves to barely stay alive.

At the moment I kinda feel like I would prefer to be a bit ill but free of the risk of heart disease, diabetes and obesity related cancer.

its not us that they dont like it is our problems, they would like us without any problems,

if we could seperate the sz from our personality and isolate it that would be pretty good.

My psychiatrist acknowledges the fact that meds are basically toxic.
She genuinely cares about my lifestyle and wants me to eat less carbs and exercise.
The problem is that I feel over medicated and don’t feel like doing much at all.
I’m doing a bit more but like my brother told me I’m basically going through life in a coma like State.
I really am tired of living like this.
It’s not much of a life at all.

This makes me sad, @Wave. I never really knew how brutal the meds could be until I got on this shyt, now I know. Our lives are being silenced.

I can barely move, I am stuck in a chair. I havent drank any water today.

Haldol is a hard hitter. How did it come about that you ended up on that?

I knew the whole time man.

Twice i escaped, they came and made sure i went back in.

Not to worry though, i know someone who can spark volcanoes, pretty simple ■■■■ actually if you have the right tools.

They are also capable of pitting every last witch on earth against eachother in a cataclysmic battle of their own making.

It kind of is a chemical lobotomy. There is a theory that the antipsychotic became the lobotomy after the old school lobotomy practice stopped. 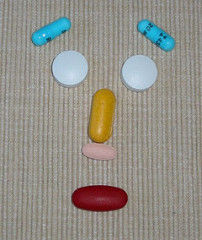 The Madness of the Mass Prescription of Psychotropic Drugs

^
That is about over prescribed. Too heavily medicated.

I am now on a resistance to chemicals kick

Well that is not good.

I think I am going the psychology route in light of this shyt. I thought medicine was so great.

over medication is only half the reason you lack motivation

yes they acknowledge it is a poison, only to let you accept this is still a tough decision

I am on an extremely low dose of Risperidone (1mg) and I take 1200mg Trileptal to sleep. The combo keeps me on my ass. I skipped Math class for 2 days in a row for no other reason than that I was too F**king tired to go. I am going to try and get my AP lowered to .5 day and drop my Trileptal to 600mg (half) and see if that helps me. I feel like an unmotivated slug. I used to work out 6 days a week (for 22 years) and since I have been MI and medicated (year and a half) I quit working out and I am 15 pounds over my old weight. I would LOVE to feel energetic, focused and motivated. The magical 3. In the zone. I NEVER feel like that

I’m basically going through life in a coma like State.I really am tired of living like this.It’s not much of a life at all.

That is exactly how I feel. I spend so little time out in public and I do not socialise and I am always tired. It is like all my efforts to better is futile. I am a lot better than the the day I got diagnosed but it feels as if the path to recovery has come to halt for me.

Yeah dude they don’t know ■■■■ about the illness. They feel no hope at all in curing it. I mean psychiatrists by and large.

I mean if you really wany to sum it up you have to look at the general phenomenon of nuerosis and psychosis. With psychosis being the parts that a segregated but active and have a separate motivation within them.

The illness itself is the remnants of a psychotic breakdown. The capacity for the brain to have psychosis manifest is “schizophrenia.”

The actuall back bone of it’s persistence is that neurological structures that have been used will want to vie for ongoing use. The schizophrenia is a cognative illness. It’s semi-conscious automata that knows it has to keep the attention of the suffered in ordwr to maintain its construction. Otherwise the typical degrasion and breaking down of the connections to and within the schizophrenia would become mottled and weak.

The whole problem is that medical professionals by and large aren’t trying to actually fix the brain. That is difficult and the methods have to be individualized and are still largey unknown. In the mean time getting schizophrenics to behave normally and have some level of peace or hope is the best they can do. It’s more unfortunate though that experienced doctors sell out to this and quickly only treat through shallow methods.

A p-doc can’t really do ■■■■. They are basically just legal drug dealers. They aren’t going to take the time to try and unravel psychosis/schizophrenia… because they don’t understand it.

They’ve all been shallow and fleeting and shown very little understanding of psychosis at all.

There are people who do get it out there. Even normies…

Truth be told though the actual psychotic experience can’t be portrayed or conveyed. Those psychosis simulators fall sooo far short of the experience of direct cognative interaction with characters other than the self. People see that ■■■■ and get scared and freaked out. Those videos are like the twilight zone compared to the hell schizophrenia actually is.