I wrote a book about my experience while delusional called, “OUT OF IT - An Autobiography on the Experience of Schizophrenia” and it’s available on amazon and other online bookstores…small sales, only about 100 books a year but each year it sells just a little bit more for some reason…how many authors are on this site that have written about schizophrenia? Or are any of you working on a book? I self published but I made my money back (about $700)…I would like to hear from you guys…

I haven’t written a book, Jukebox but I did read yours. I thought the first part was very well written and interesting, with the title for each chapter. Then it got sort of out of hand with the visions which were one helluva long train of thought. You might consider rewriting that part. I understand you better after reading it.

OUT OF IT - An Autobiography on the Experience of Schizophrenia 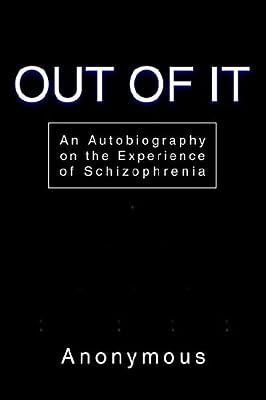 Out of It: An Autobiography on the Experience of Schizophrenia

Out of It: An Autobiography on the Experience of Schizophrenia guides us through one man's mental journey through seven months of schizophrenia.While being interviewed by the emergency room psychiatri ...

Anyone else who has written a book can just post the Amazon link here and it will show up like the book above.

good on you.
i wrote a childrens’ book, it is on amazon.
take care

I wrote a book on my experiences with mental illness (including sz) called ‘Mindstorm’ and sent it to three publishers in South Africa where I live. So far one publisher rejected it, and the other two haven’t answered yet. It’s been over three months since I sent it off so I’m feeling really impatient. I want to earn money with my writing, as well as help combat the stigma of mental illness and mental hospitals.

I have published lots of articles in academic journals but I don’t want to give my full name on here. I am also working on my son’s story from the angle of how SZ treatment differs in different countries and cultures so if anyone can help please message me and OF COURSE I will credit your name and story if you want. I have spoken on social withdrawal at lots of conferences and next one in Rhode island. Last one was March in Osaka Japan.

I think it’s much more interesting to read from the inside out- from someone dealing with SZ themselves rather than a carer like me. Unfortunately my kid would never write his story, he is not a writer but I can do it fro him I hope.

thank you pob and Erratica for your feedback…I really can’t say I would have written the book any differently…it was supposed to be about delusional content? Maybe that’s why I have low book sales though? I intended on the delusional content to show just how “out of it” we can get…

thank you szadmin for posting the book !!

Could you give me the name of the book? I’ll understand if not.

I remember when reading your book that with the long + very involved process that was going on in your head that you could maybe come down on earth enough to mention locations you were in + when those changed and anything, if at all you might have to say. And somehow manage to keep the continuity of the visions going. And maybe keep with chapter breaks with Titles

But you might not want to fiddle with it now.

ooops, not you SzAdmin… @jukebox

i’d rather be ’ unknown ', thanks for understanding.
take care

I wrote a book as a schizophrenic, but it is not about schizophrenia. There is a few references to it though. I haven’t done anything with it because I don’t really understand what to do. I’m waiting to find a good underground Internet publisher or something that might be able to treat it well.

The interesting thing is how much I want to write again.

I spent two years writing the book. Is was all I thought about.

I’ve recently been able to get my medication regularly. It’s odd thinking about the mental problems I was having, and then to look at them now, mentally, and the specific things just kind of fade. It’s odd.

You can self publish, you can have it peer reviewed, there are several services in place for prospective authors to get their work noticed.

I think, after all the time I spent after the finish, to go through all the phone calls I made and people I contacted, the number one most salient point was how the (or a) novel would be presented to a prospective audience. In your case, you’re dealing with a set of readers who are interested in that material. I think in my case, which was a novel meant mostly for enjoyment, I was hard pressed to define my specific reader. Presented correctly, it would make a great impression. If I had done it myself, or handled it myself through self-publishing means, it would have been a misfired shot into the ground.

Initially, I had come to the conclusion that I should release the book for free to help circulate at least a little bit, but I think I understand that I’m looking for a certain kind of publisher that would be interested in a “quality, interesting near-future book”.

It took a premise that was near future, then applied a lens of a distorted perspective over it.