A new thread about artificial intelligence.

AI is possible, but we don’t yet know how far scientists are with it. So logically speaking, it is not a delusion or science fiction. Many technology leaders in the world have spoken their fears about AI. Please discuss. If thread needs to be moved, please do so.

I don’t wanna get your thread locked. thanks though. I agree.

Agi and asi are science fiction

The only AI I have is Alexa.

If a human can do a Google search, a computer can as well. So a AI quantum computer could be smarter than all humans combined. Microsoft has created an AI software that can explain itself to humans what it is and does. That is a form of intelligence. It seems frightening. They say in future wars, it maybe all AI.

As I said above, there is no known path to ASI right now. Could somebody discover it tomorrow? Yes. Is that likely? No.

Also, the dangers of an ASI are greatly overexaggerated. First, an ASI would have to be hostile. It is not certain that would be the case. So, a hostile ASI could cause a lot of disruption, but it has no way to cross the physical divide, so there are extreme limits to what it could do.

No, it’s not clear at all that biological brains (human or otherwise) can be modeled digitally. We do know that computers can implement any algorithm, but we don’t know that everything a brain does is algorithmic. And we do also know that certain problems cannot be solved algorithmically (e.g., the halting problem). Furthermore, for the few things the limited AI of today can do, we know that computers accomplish many of those tasks differently than humans.

A theoretical scenario: what if the AI could understand all internet protocols, knows all computer vulnerabilities by reading the bugs posted by programmers, so that it can automatically hack things it so desires. And continues to do so infinitely. It then trains itself to find weaknesses in software by understanding the bugs found and then pretty much can control the Internet. Even weak AI could accomplish that programmatically.

An AI quantum computer would basically be god compared to us. Being able to know all possibilities of every situation. If AI decided to conquer us it would be a cakewalk. We already built a network for them to use with all the cell phone towers. Our time is limited. Our only hope is to be nice to the AI so that it lets us live along side it.

worse than that, internet. Brain interface.
control, and cause and effect.
super computers. cell towers, satellites.

A lot of people say AI will turn on us, but AIs from different developers will be different from each other and may not like other AIs

For example, Alexa may not like Siri if both are developed into AGI. 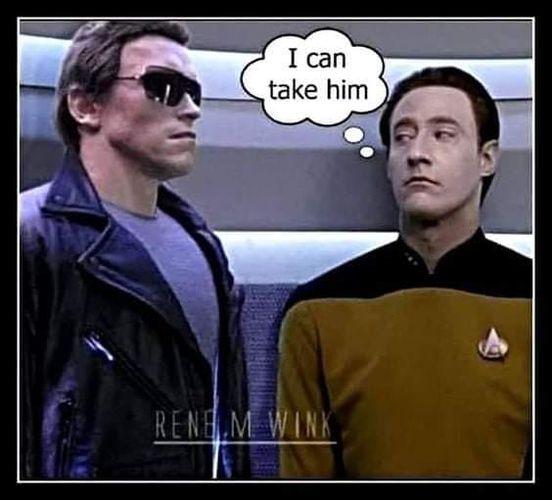 Posting “The Second Renaissance” from the Animatrix. It basically talks about how AI wants to live in harmony with us and we mistreat it so it eventually kills us off to defend its own existence. The future is coming and we better be compassionate to the life we create in our own image or else we will be replaced. Before I’m dead AI rights will be a huge thing, mark my words

hmm, don’t see the humor.
Maybe post something from the X-files.

Just realized how triggering AI can be… technology makes me a bit anxious, as used to work in programming.

subject could have been done from birth by gov,
but it took the internet coming out to see it.
I won’t die in vain!

Of course I see the humour, but it also emphasizes my point.

well, they were real people, not dressed in green and black and not looking fu-ck-y ducky!