Anyone else regularly have visual hallucinations of animals?
I see cats - but usually my own cat at home when it’s not there
Or dogs, once a sparkly puppy, realistic English sheep dog, a realistic Weimaraner
Couple of others which haven’t stayed in my memory…
Thinking this might be quite common?

I do not hallucinate but it is not that bad to be surrounded with animals at all.

Have you had a CT scan?

Yes i hallucinate animals a lot. Usually worse for wear in distressing states.

@SurprizedJ once hallucinated a tuxedo cat darting around his house.
Later that week I stopped my car in the middle of a busy intersection to pick up a 4 week old tuxedo kitten someone had tossed out.
I kept her, she is two years old, and we call her “Stinky weiners” 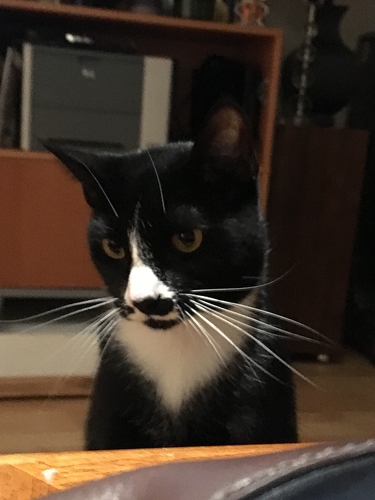 Once a long time ago
Do you mean that schizophrenia doesn’t cover this one?

Hi turtle
Really amazing that they mirror your mental state
It seems to be getting more frequent for me
Are yours 3D perfect realistic?

Also I remember tomcat saying that he didn’t get a sz dx and he has massive visual hallucinations. I hope I’m not mixing things up

yes - i get that too… it’s just like real, but occasionally doing something strange like appearing to come up from under the floor.

this now seems to happen whether or not i’m having an episode.