I’d say the strength, milligram for milligram, is roughly the same. I’m currently taking 4 grams of the Real Mushrooms Lion’s Mane a day, while the suggested dose is 2 grams. I wanted fast results since the voices were picking away at my very last nerve.

For what it’s worth, the Amyloban suggested dose also works out to 2 grams a day.

How has it worked for delusions?

I find that the delusions go away with the voices. Since the voices aren’t pulling me back into the crazy narrative nearly as much, I can more easily focus on real life.

“The researchers concluded that Lion’s Mane regenerates damaged nerve cells . In this case, the reversal was so profound, the rats went from being totally disabled to walking again .[ix]”

Nerve crush injury is a well-established axonotmetic model in experimental regeneration studies to investigate the impact of various pharmacological treatments. Hericium erinaceus is a temperate mushroom but is now being cultivated in tropical...

Maybe that is why @velociraptor’s arm hurts less now.

This reminds me of that old movie in which Gene Hackman’s character says he can grow nerves, but needs to get them to stop growing. 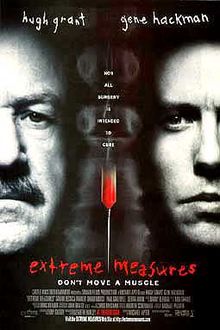 Extreme Measures is a 1996 American crime thriller film based on Michael Palmer's 1991 novel of the same name, dealing with the ethics of medical sacrifices. The film was directed by Michael Apted and starred Hugh Grant, Gene Hackman, Sarah Jessica Parker, and David Morse. Dr. Guy Luthan (Hugh Grant) is a New York emergency room doctor who one night comes across a strange patient: a homeless man who has a wristband from a hospital he's not familiar with, mentioning a drug he's never heard of, ...

not from a drug-like “high” as with something like L-Theanine.

That stuff didn’t work noticeably for me. Think I’ve still get a bottle left somewhere. Just gave up on it.

I slept really well last night. This is my second day of potent lions mane extract.

The docs told me that Wellbutrin is activating. Therefore I take all of it upon arising.

The docs told me that Wellbutrin is activating. Therefore I take all of it upon arising.

I’ll have to ask about that, thank you. I’m just taking mine as it was prescribed.

I found a source that is organic and ships to us and canada. Its cheaper then any of the other sites. The guy is a super advocate for lions mane. Just wondering though if this is the masciliated version.
I will add. I think im going to get from this place. I will let everyone know how it is.

Fungi Perfecti® is a family-owned, environmentally friendly company specializing in using mushrooms to improve the health of the planet and its people. Founded by mycologist and author Paul Stamets in 1980, we are leaders in a new wave of...

I checked and the product uses mycelium (meaning it is high in starch.) Good luck though.

Dang its just hard to afford the other stuff. Okay i will check out real mushrooms. LOL nvm realmushrooms is cheap too. Shoulda looked at your link first. Thats what im going with.

That guy Paul stamets is legit

I don’t know of anyone here who claims to be able to treat disease, but you could show his doctor the study published on the NIH site and ask him if it would be safe to try. The best doctors I’ve had have always been willing to look at legitimate research.

Definitely something for him to discuss with his physician! I only bought the stuff to help with positive symptoms that were starting to overwhelm me, everything else is just a wonderful surprise. That fact that it even works at all is a surprise. Of all the other stuff that has been discussed here over the years I think the only other supplement with any real potency has been sarcosine.

Yeah, I’m thinking of asking my GP or neurologist about this. If it helps with chronic nerve pain, that would be wonderful.

One thing to bear in mind though is that mushrooms and fungi can slow blood clotting. Folks who are on a blood thinner or who have a clotting disorder should exercise caution and definitely consult their doctor.

“Bleeding conditions : Hericium erinaceus might slow blood clotting. This might increase the chances of bruising and bleeding in people with bleeding conditions. However, there are no reports of this occurring in humans.”

This stuff also apparently lowers blood glucose levels.
I am diabetic and take the drug Metformin to lower my blood sugar.

I wonder if Amyloban would be a wise choice if one is taking a medication to lower blood glucose levels.

This stuff also apparently lowers blood glucose levels.
I am diabetic and take the drug Metformin to lower my blood sugar.

My blood sugar is lower, but I also switched to a healthier diet at about the same time I started the 3399. Impossible to say if it is playing a role here.

Thank you for reading me as I was intended to be read!

Well, Wellbutrin comes in sustained release and long acting. Darned if I can remember the difference.

Thank you for reading me as I was intended to be read!

You are a Forum Sage, sir.