Abilify can cause hallucinations at higher dosages

I’m looking for cases, where people have begun hallucinating on Abilify, so far over ten people have responded with clear cases, of Abilify causing visual hallucinations, and distortion of other senses ( sound, etc ) . . I also hallucinated, very strongly on Abilify, on the dosage 45 mg, in 2006. However, another patient had a 12 - hour hallucinogenic experience on 5 mg, so the dosage where it triggers these things, is very unpredictable . . A danish patient began hallucinating on Abilify, and was labelled psychotic for 4 years, and put on other drugs, when Abilify was stopped, she stopped hallucinating, and left psychiatry . .

Now, it’s somewhat complicated, but it turns out Abilify affects the type of brain receptors, called serotonin 2A ( shortened, to 5HT-2A, 5HT is the short name for serotonin, also ) . . . LSD has an effect of 25 %, roughly, in that receptor, and at lower dosages Abilify is at about 20 %, as dosage increases, it goes to 40 %, and crosses the point, that LSD has . . LSD causes massive psychotic experience, in particular visual hallucinations, but can also cause ego-dissolution, disinhibition, so on, and is particularly dangerous, for mental patients, bec. it can cause disinhibition towards even suicide, and even after stopping taking it, can cause psychotic flash-backs for up to 4 years after taking it . . 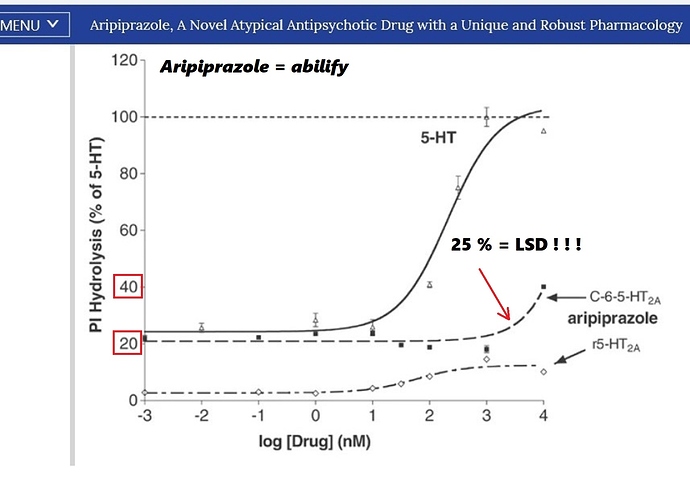 The graph says aripiprazole, which is the chemical name, for Abilify . .

The graph is a bit complicated, the important thing to note is, that at lower dosages, Abilify hovers right beneath the LSD-value ( marked with red box, at 20 % ) and goes up to 40 % ( the second red box, on the y up - axis ) . . This explains clearly, why many have hallucinated on Abilify, so far I have about 12 cases, that have experienced a full LSD - like trip, or hallucinogenic experience . .

LSD is a very potent narcotic, that strongly changes a person’s perception of time, causes hallucinations, and even disinhibition, here’s a description, of what it can do . .

Description of different dosages of LSD :

Low dosage - Bright colors, surfaces start to move, warp or breathe slightly. Confused or reminiscent thoughts. You start to think more. Change of short term memory leads to continual distractive thought patterns. Your brain starts to speed up and you become more aware of everything.

Medium dosage - This is where things can get powerful. Your mind is racing. Beautiful colors are everywhere. Closed eye visuals are very apparent at this point. Life changing, spiritual experiences or realization can happen at this dose. If you are a noob to lsd this dose is simply too high for you. Many people can handle it quite well but some may freak out.

High dosage - Strong hallucinations and visuals. objects morphing into other objects (both closed and open eye visuals). Destruction or multiple splitting of the ego. (Things start talking to you, or you find that you are feeling contradictory things simultaneously) Some loss of reality. Time becomes meaningless. Pretty much where even some of the most experienced people draw the line. Your vision is almost completely enveloped by fractal patterns, and if you were to stare at some pavement or something, it looks like you can see to the end of eternity. Miles and miles of visual depth. There are many subtypes of these: Mandelbrots, spirals, wave interference patterns,etc.

I have already got answers from people that have hallucinated, but everytime I ask, more people come forward, so I wanted to ask again, since new people read here, all the time . .

The max safe dosage of abilify is only 30mg

I realize the mods here are pro-drugs, and pro-psychiatry, and even really dangerous side-effects are preferred, to keep patients medicated, if you have information, that they don’t want to see here, you can write a private image . . The only thing I do with the information, is to send it, in a combined complaint, to the danish FDA, that has vows of confidentiality, ie. it will be treated as confidential, by the health departments, no names will be mentioned, etc, except in e-mails, to the FDA <3 Thanks

There are articles where a 13-year old kid got 60 mg, and a woman got 75 mg, according to the danish FDA doctors are allowed to go over maximum dosage, it’s more like a guide-line, than a rule, at least, in Denmark . . <3

Be aware, that the company has lied to the FDA about side-effects, so far 2600 patients have sued the company, you can read what the lawyers involved says here . .

" Court records state the drug makers failed to properly test Abilify; exaggerated the benefits of the drug; and encouraged physicians to use the medication for purposes not approved by the FDA. Abilify is not approved to treat anxiety disorders, dementia, eating disorders, insomnia, obsessive-compulsive disorder, or post-traumatic stress disorder. Yet, the makers of Abilify convinced doctors to try it for these conditions.

The Key Legal Issues* The Abilify makers failed to warn doctors and patients of the connection between Abilify and compulsive behaviors.

Because of the legal problems involved in selling LSD, by accident, are too severe, this is obviously a mistake by the company, but it’s really bad for the patients, as it worsens psychosis and, potentially suicide . .

The patient was a 13-year-old boy admitted to the hospital following an alleged suicide attempt. This admission was his third over the past year.

The patient’s psychiatric illness began at puberty about 1.5 year earlier. His parents first noticed a change in behavior when the patient became oppositional and defiant; however, he exhibited no frank antisocial behavior. The patient then became more withdrawn, although he continued to do well in school, maintaining close to an A average. His first psychiatric hospitalization occurred at age 12 and was occasioned by reports of persecutory hallucinations and delusions. His second hospitalization approximately 7 months later involved transfer to a facility several hundred miles away from home for extended care. He was treated at that facility for 3 months before returning home approximately 3 weeks prior to his suicide attempt and this admission.

Another case, from a local girl, where I live, similar region, got Abilify and, hallucinated people, and objects that were not there, and one patient experienced everything as ‘looking’ green, or having green sun-glasses on, after getting Abilify . .

My goal is to gather enough cases, so the FDA will do an inquiry, and put this side-effect, on the pills, since it’s currently undocumented, which would make the medicine more safe, which is nice . . .

Good luck facing big pharmaceutical companies, you need lots of money, time and lawyers. Abilify didn’t cause me any hallucinations at 25mg. It gave me addiction and hypersexuality issues but at the same time it was the only med that improved my negative symptoms.

don’t go off your abilify under any circumstances. It is much safer than most other antipsychotics.

I switched to Risperdal, my pdr tapered it.

Made me hallucinate for sure

In 2018 my psychiatrist prescribed me Abilify 10mg and Seroxat 25mg for anxiety. I used Abilify just for two days and I couldn’t continue due to the severe side effects (visual and sound hallucinations, nightmares, panic, depression, nausea, blurry vision, and a throbbing headache.)

I’m not a schizophrenic; I do not hallucinate, but Abilify is one of the drugs that can make me hallucinate and feel worse.

Hi @H.A . I went ahead and approved your first post but your post says that you are not schizophrenic. Do you have a related psychotic disorder? If not, this may not be the right place for you.

This is a peer support forum for people with schizophrenia and related psychotic disorders.

I’m an “aspie” with no comorbid psychotic disorders. I just wanted to share my experience using Abilify; a small dose for a short period of time is enough, in my case, to cause hallucinations.

Enjoy your stay with us!

My doc wanted to change me on Abilify, in her opinion it is better than Vraylar. Though Vraylar is getting harder to find, I might end up on Abilify after all.

This is concerning. Anyone except H.A also reported this side effect at normal range doses? What is the lowest dose possible?

I was on olanzapine and the side effects were bad so my doctor suggested we try Abilify. I tried Abilify in 2012 and it didn’t work and I started having visual hallucinations. I don’t remember the dosage I was on so I don’t know if the hallucination were from psychosis or the Abilify.I always suspected Abilify simply didn’t work for me and it was the psychosis, but according to what you wrote maybe it was the Abilify.