What kind of feet do you have?

I just checked. I have Greek.

Foot shapes was considered to describe personality type and ancestry which is debunked now.

Despite living being India we seem to have same views about it as west.

I have Greek as well.

Egyptian. Does that mean I have to walk like an Egyptian?

One thing was assumed that it tells about ancestry. Which is debunked properly.
Another was describing personality traits. Which has no empirical basis either I think. 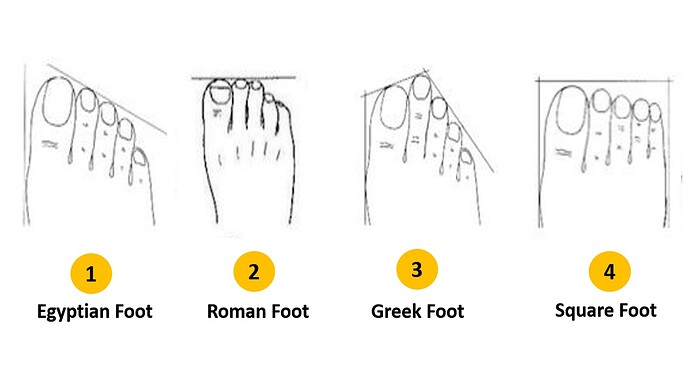 Foot Shape Personality Test: Do you have Square foot shape? Is your second toe longer youre your big toe? Are your first three toes (including the big

I have personality of Egyptian one.

So that debunks it.

I have greek feet. With the second toe way longer than the first one… I also have a big gap between my first toe and the second one, it looks very strange and many people around me laughed on me on that heh

I thought, that greek feet are rare, but i am surprised, that many people have them here lol.
Hugs

We’re not into that

I have regular 9.5 D’s. What nationality I don’t know.

Likely a fairly accurate usage of we

I’m size 12 EEE (extra wide, US men’s shoe) I usually order shoes as they don’t carry my size much in stores.

There is no Side Show Bob or Ronald McDonald’s feet in the line up?

I have Greek feet

@crimby @ElGato Not taking order for a custom shoes here

You have feet of royalty. You like to be taken care of and pampered. Aesthetics are very important to you. You are highly guarded and do not like to invasion in your privacy. People with Egyptian foot shape are usually secretive. Many aspects of their life are completely hidden from the outer world.
They usually lost in their own dream world. They enjoy their own company and ‘me’ time. You also tend to find escape from reality. You have a personality of a dreamer. You can also be impulsive and rebellious. They can be moody and have outbursts of energy as per their own mood.