What happened to bunny?

Why ?she was seems ok

Well, bunny had two accounts, and decided to play with our minds by using the two accounts at the same time on the same threads. For me, it was a disappointment.

Oh its no secret…haha I hope she’s aight though…

If it wasn’t a secret to you, good to know. For us it was. It’s not even remotely funny.

For me, it was a disappointment.

So you got deleted.its not a serious guilt i think.we are not nornal people and moderators must consider this i think

Yeah, we don’t like to be played. She’s suspended, when she comes back hope she at least says who she is. 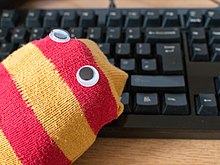 A sock puppet or sockpuppet is an alternative online identity used for purposes of deception. The term, a reference to the manipulation of a simple hand puppet made from a sock, originally referred to a false identity assumed by a member of an internet community who spoke to, or about, themselves while pretending to be another person. The use of the term has expanded to now include other misleading uses of online identities, such as those created to praise, defend, or support a person or organi...

It’s a major offense on this and every other Net forum in existence. Those who are caught are usually banned. She is lucky her other account was only suspended, but there is now zero chance that those who are in the know will treat her seriously or consider what she posts as having any worth.

So I should delete my other 2 accounts?

That’s totally a joke…plus I put … After ■■■■■■■ every breath… Ampersand? Something like that…I think the mods would notice…lol…

Not a funny joke I see…too soon?..

Well dam rip this thread…15 gunshots and some fireworks…

I’ve never used sock puppets but I used to do a lot of catfishing on Facebook.

Then we noticed that she had been using two accounts for a while (the Bunny account and another account @ShadowPuppet) which is against forum guidelines.

Therefore, we locked her old anonymized Bunny/Anon account permanently and placed a 7 day ban on her @ShadowPuppet account.

She is welcome to come back on the forum using her @Shadowpuppet account once the 7 day ban is over.

We take duplicate accounts very seriously because it is a violation of other members’ trust to concurrently post under two different accounts.

From the Forum guidelines—

We want our web community to be a gathering place for sincere, helpful people whose wisdom you can trust. That is why our staff will routinely remove messages that promote false claims of miraculous cures or other untruths. Since trust is so important, we do not allow members posting with 2 separate identities (posing as 2 different individuals). Any member doing this will be banned from our community.