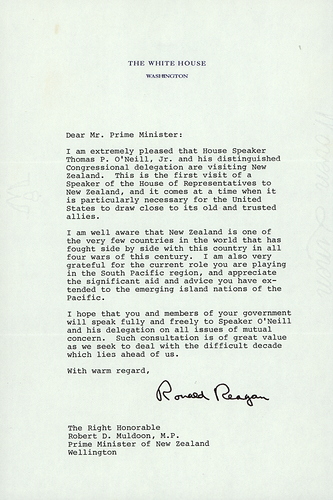 Courier is a monospaced slab serif typeface. The typeface was designed by Howard "Bud" Kettler (1919-1999). Initially created for IBM's typewriters, it has been adapted for use as a computer font and versions of it are installed on most desktop computers. IBM did not trademark the name Courier, so the typeface design concept and its name are now public-domain. According to some sources, a later version for IBM's Selectric typewriters was developed with input from Adrian Frutiger, although Pau...

@Plumber is right. Courier and Courier New are the standard “typewriter” fonts in the US. The letter you’re referencing would have been typed on an actual typewriter. Letters nowadays would be done via computer.

The font on this more recent letter is Times New Roman.

Thanks for your answers.