Consider it a series. Art by me, Bec, and ft my dear creation Max as a proxy. 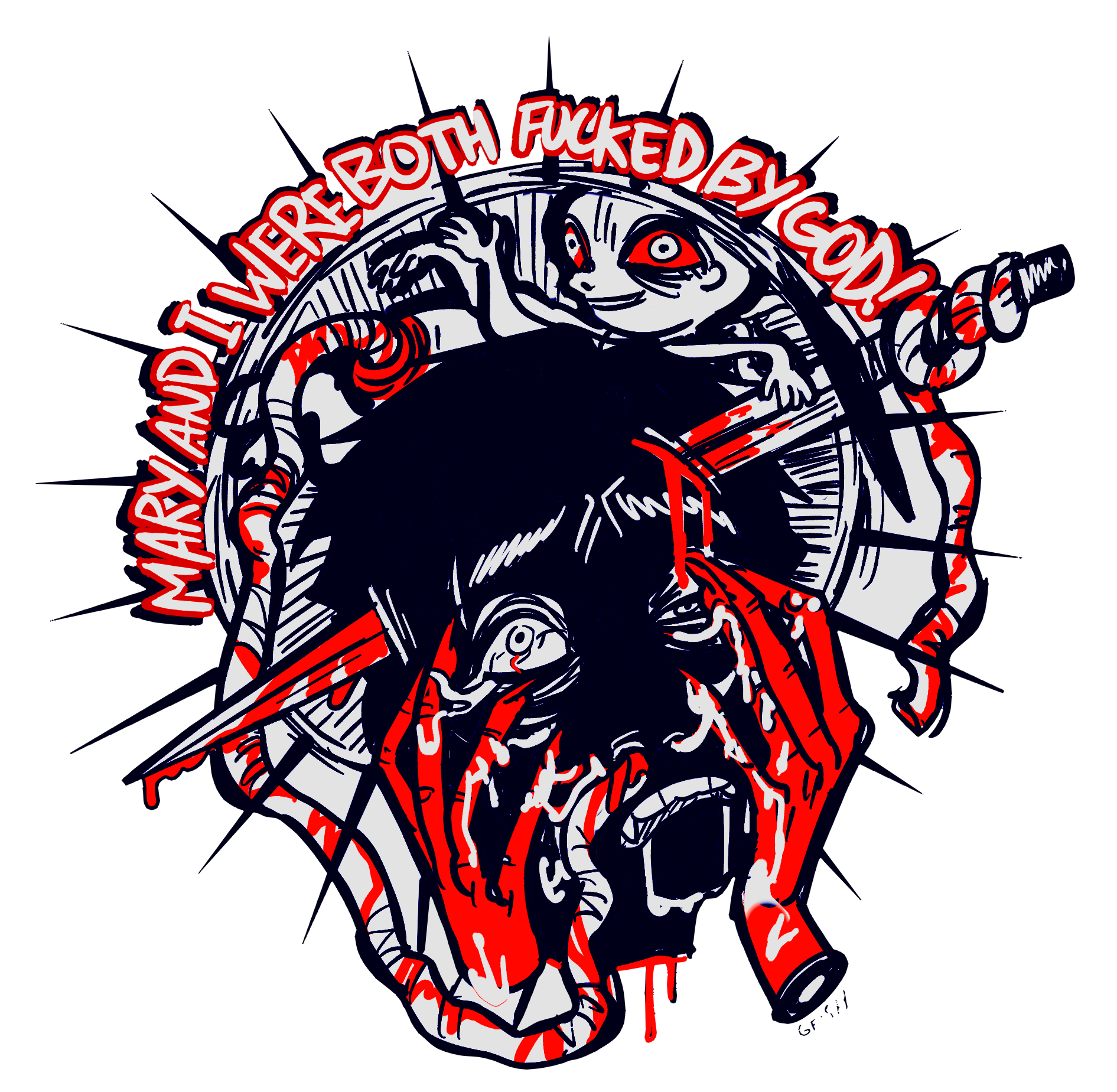 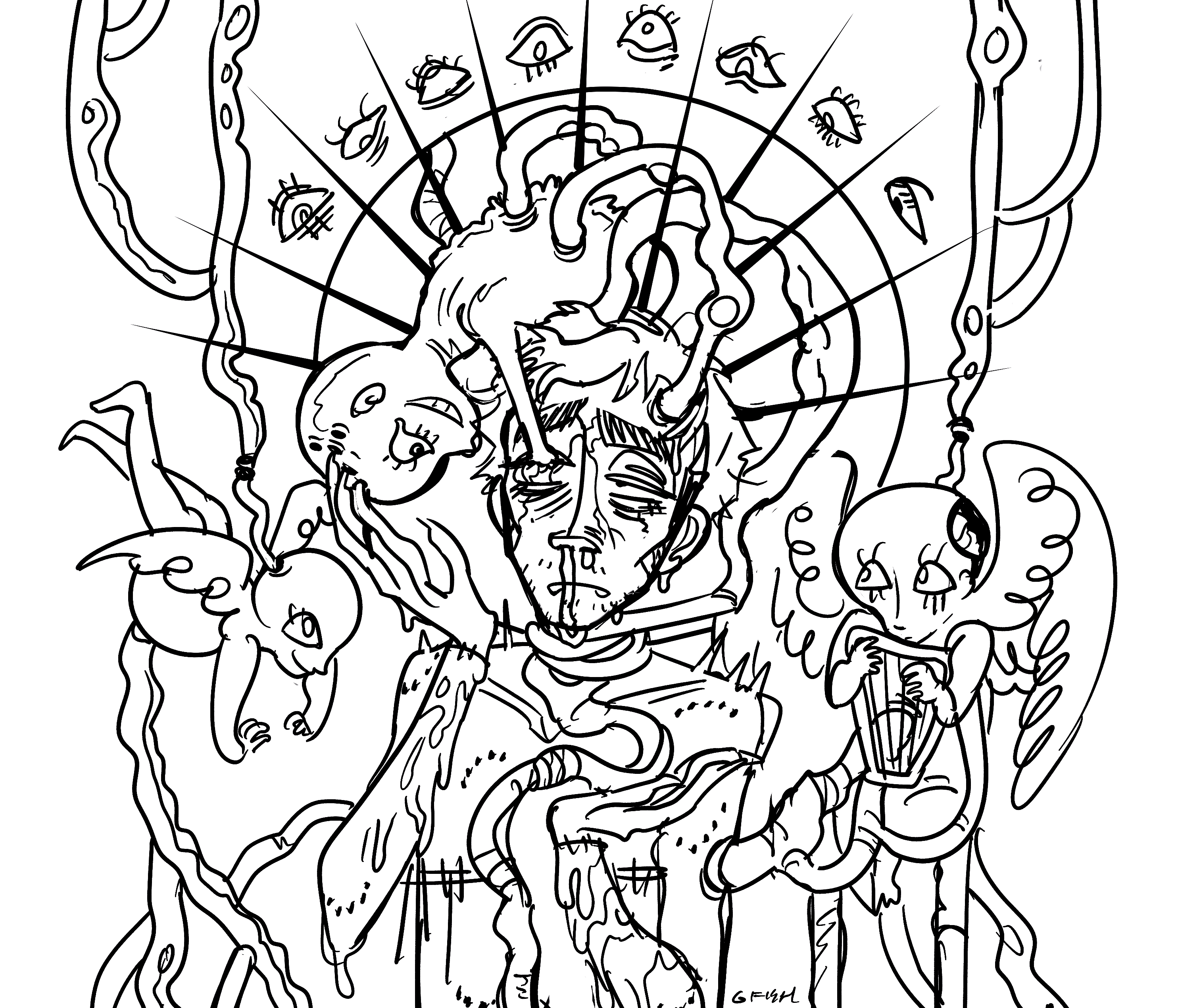 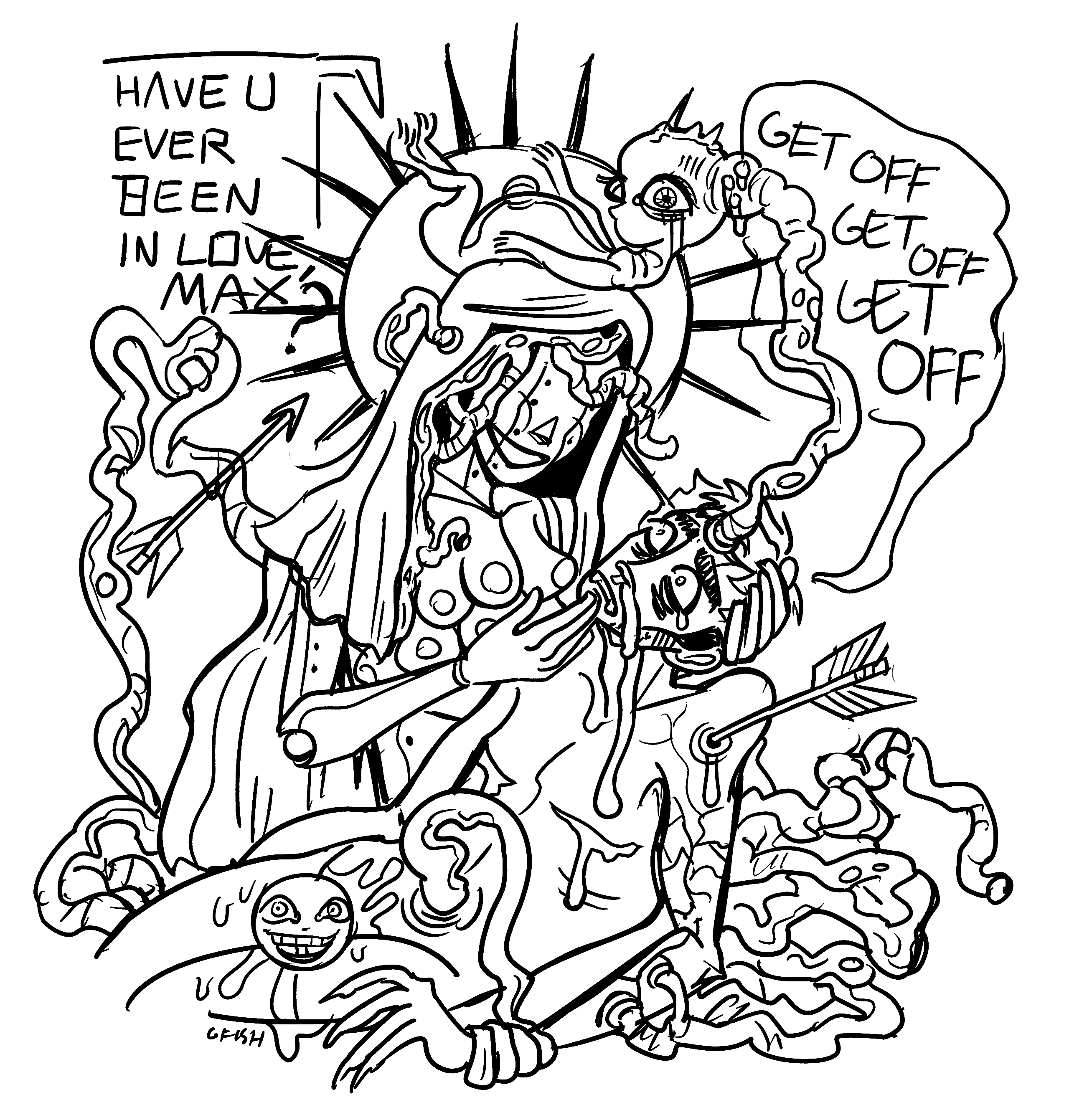 “OH MISS MARY SIX TIT, HOW SWEET IS YOUR EMBRACE!” 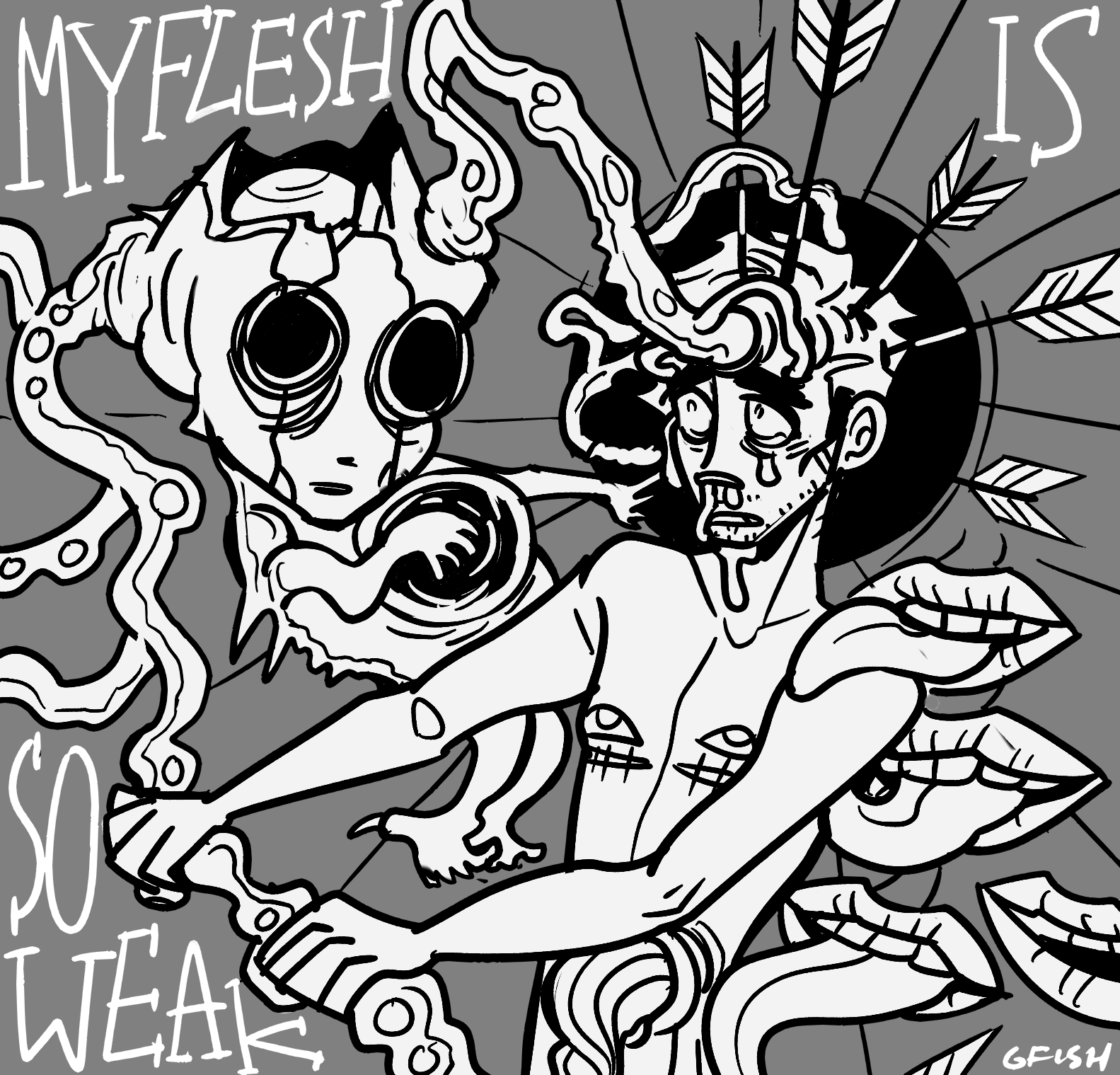 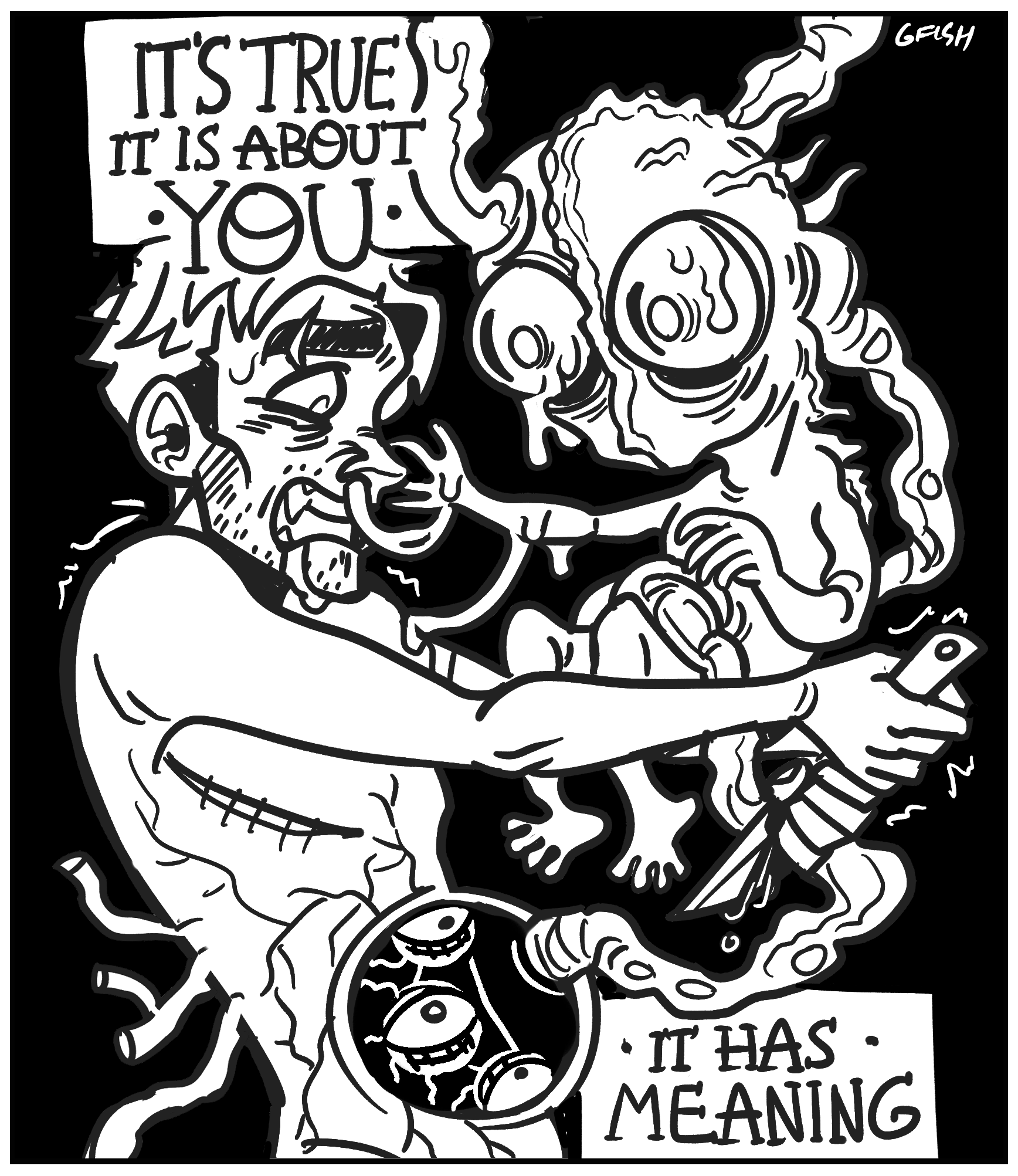 “THEY ARE NOT KIND AND I AM SO SORRY” 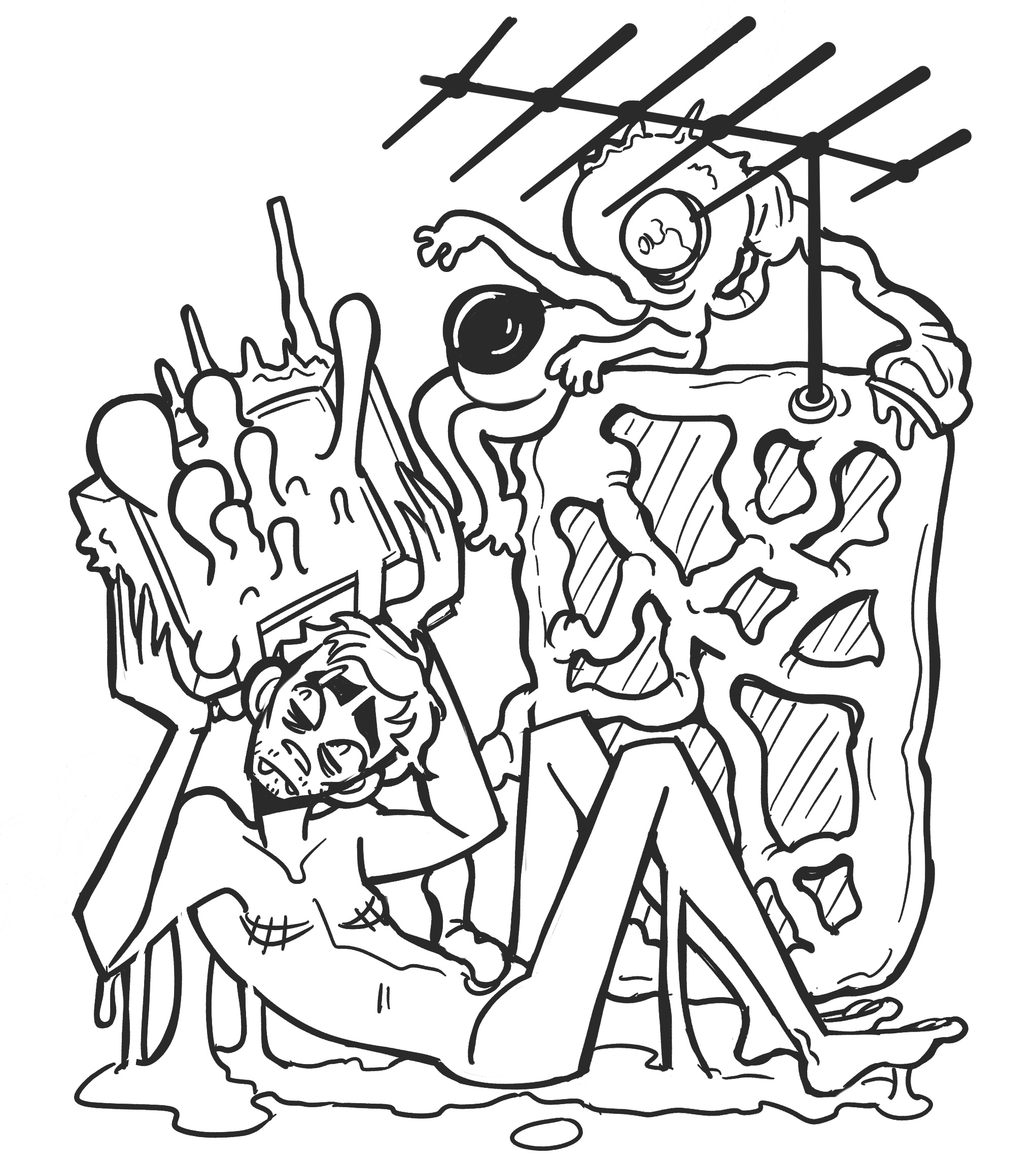 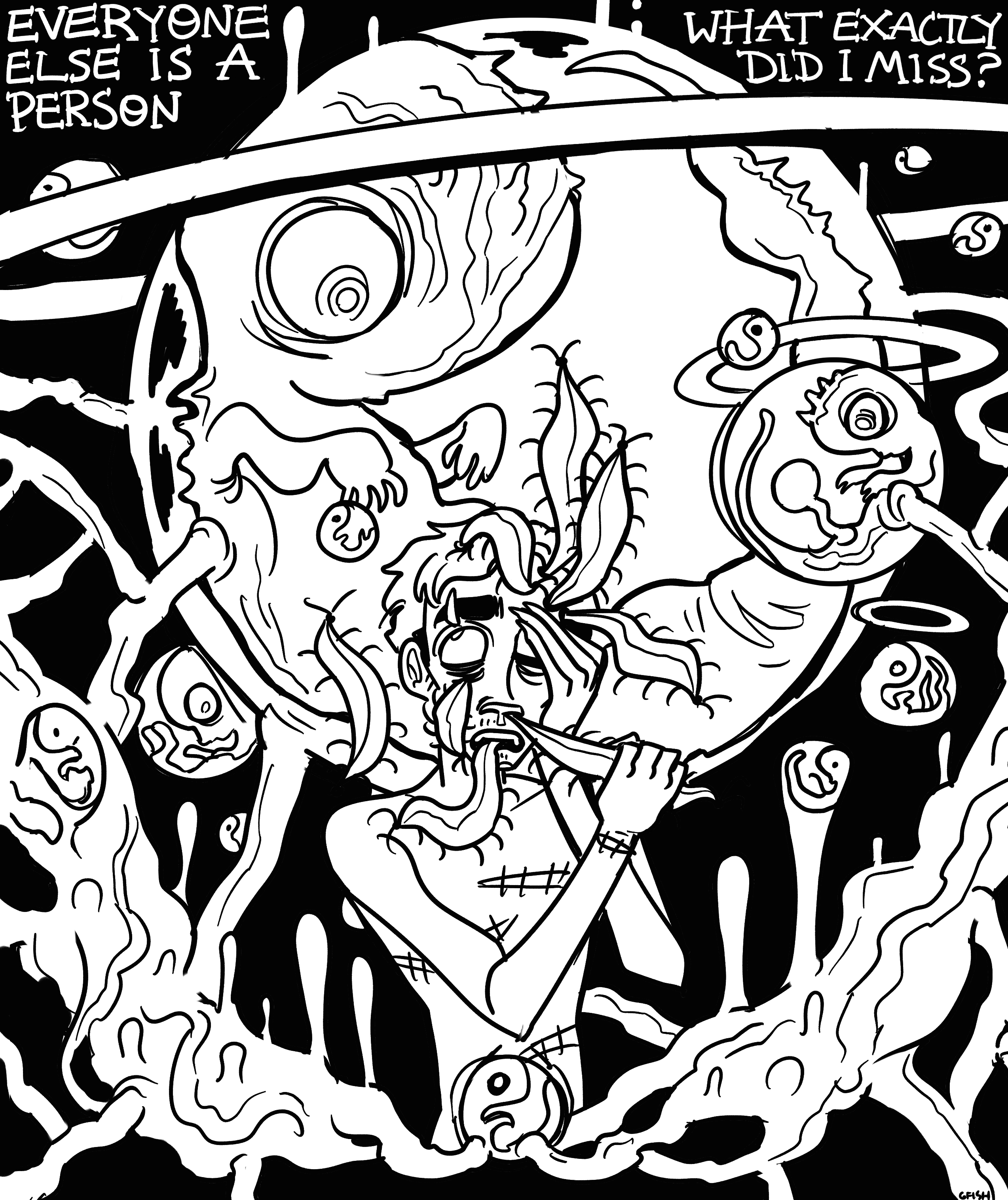 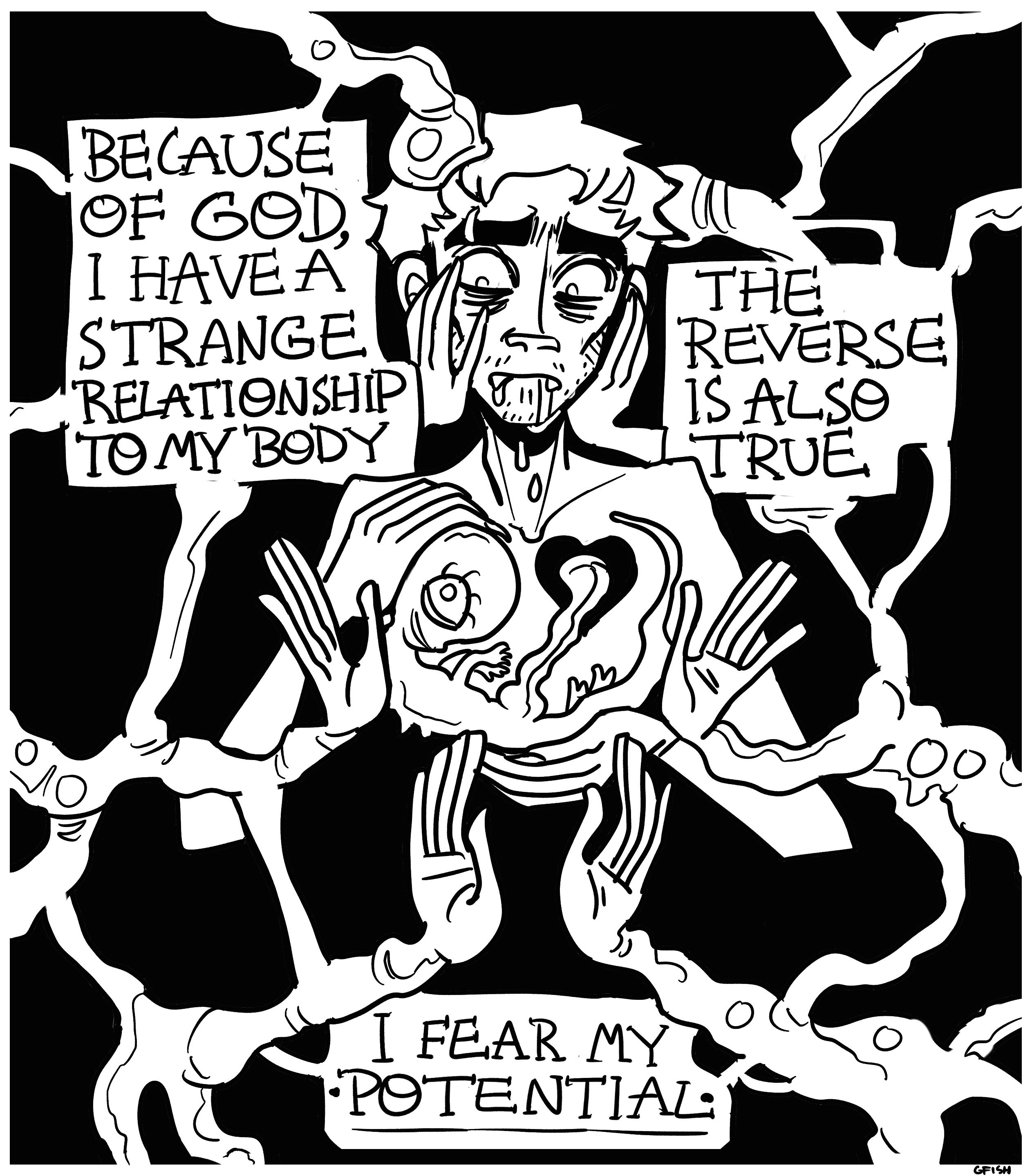 “WHAT’S SO FASHIONABLE ABOUT LIQUID” 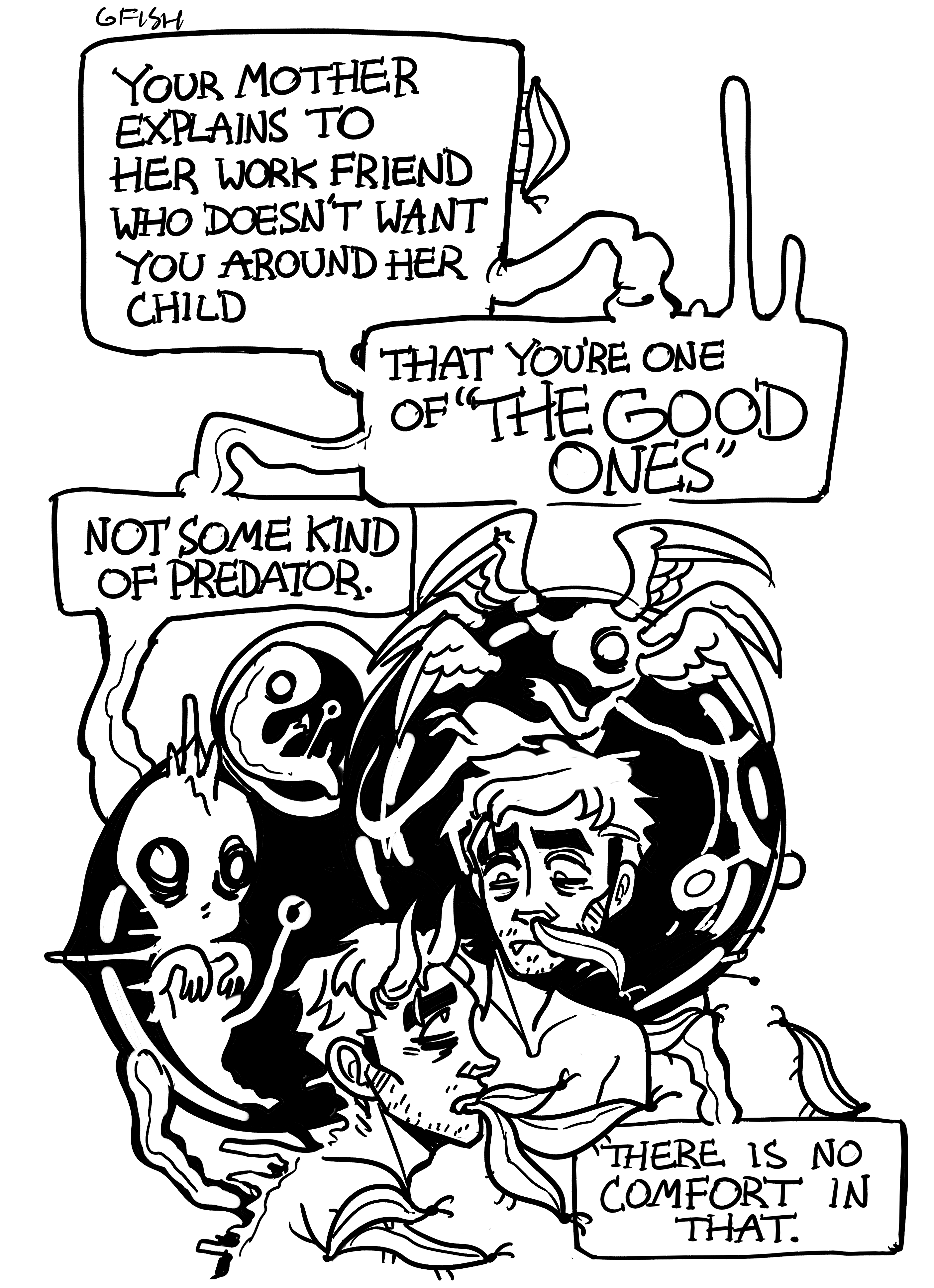 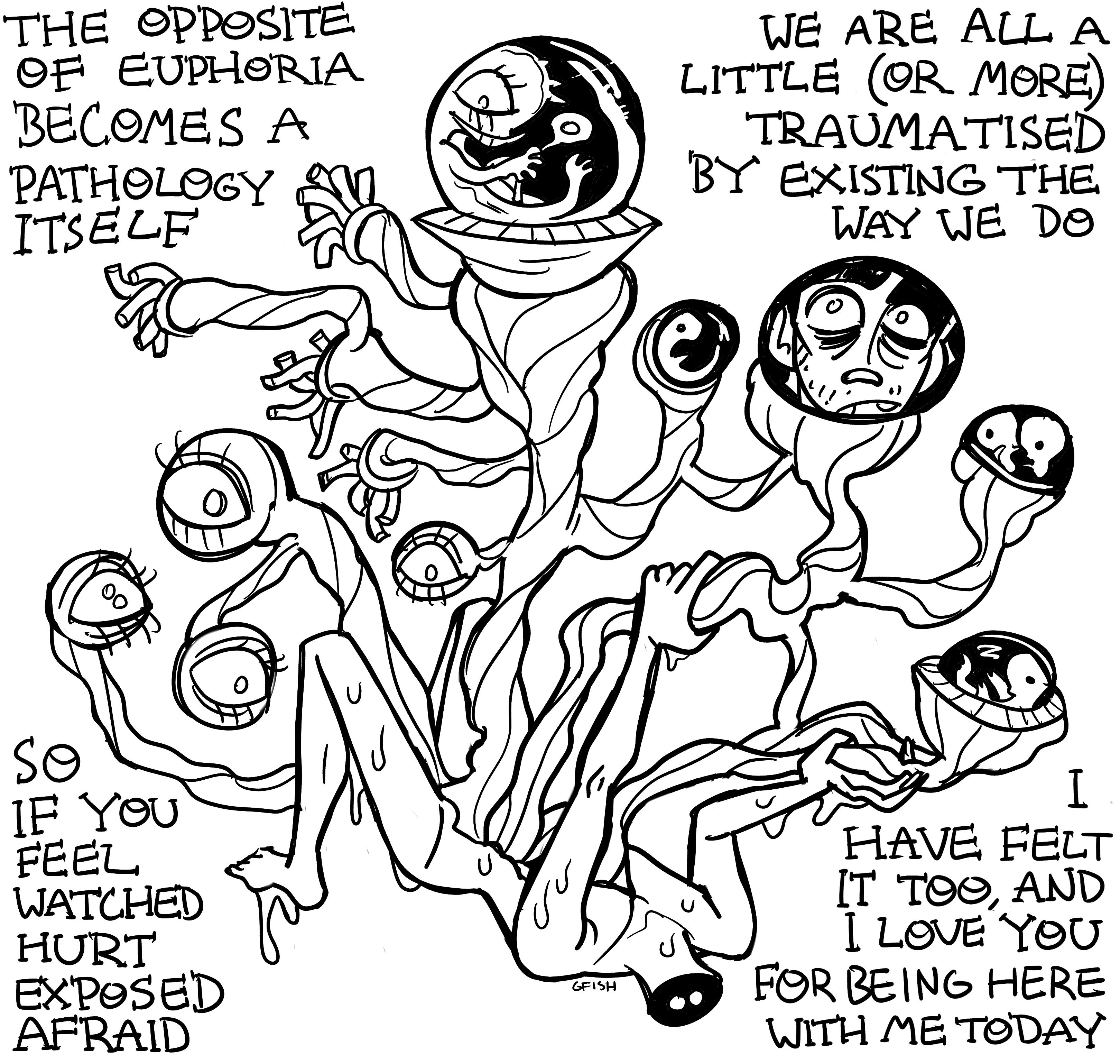 “BY THIS POINT I HAD BEGUN TO FEEL BETTER,
AS WELL AS I FELT KINSHIP” 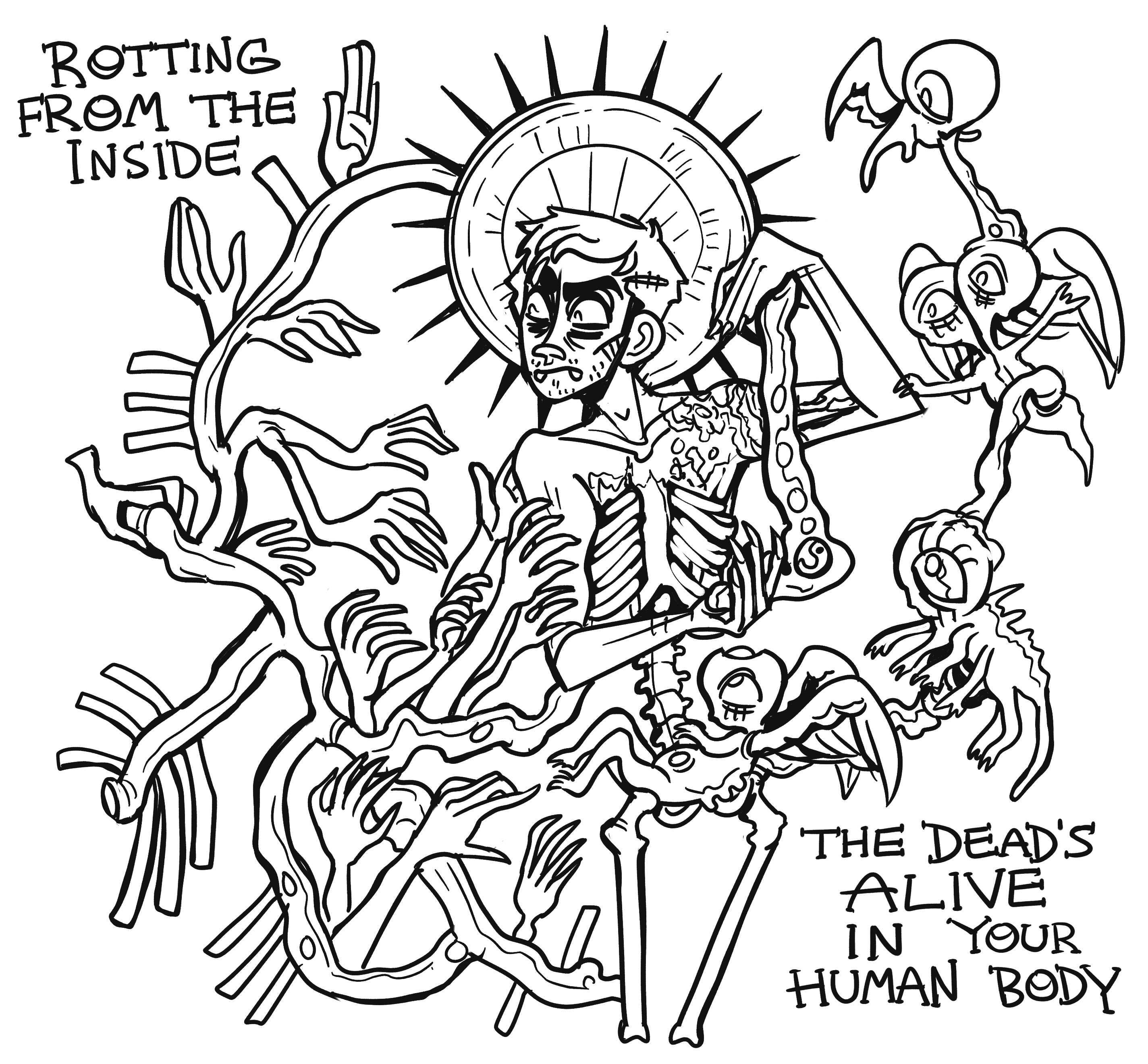 “ALL MY WALKING CORPSES PUT YOUR HANDS IN THE AIR” 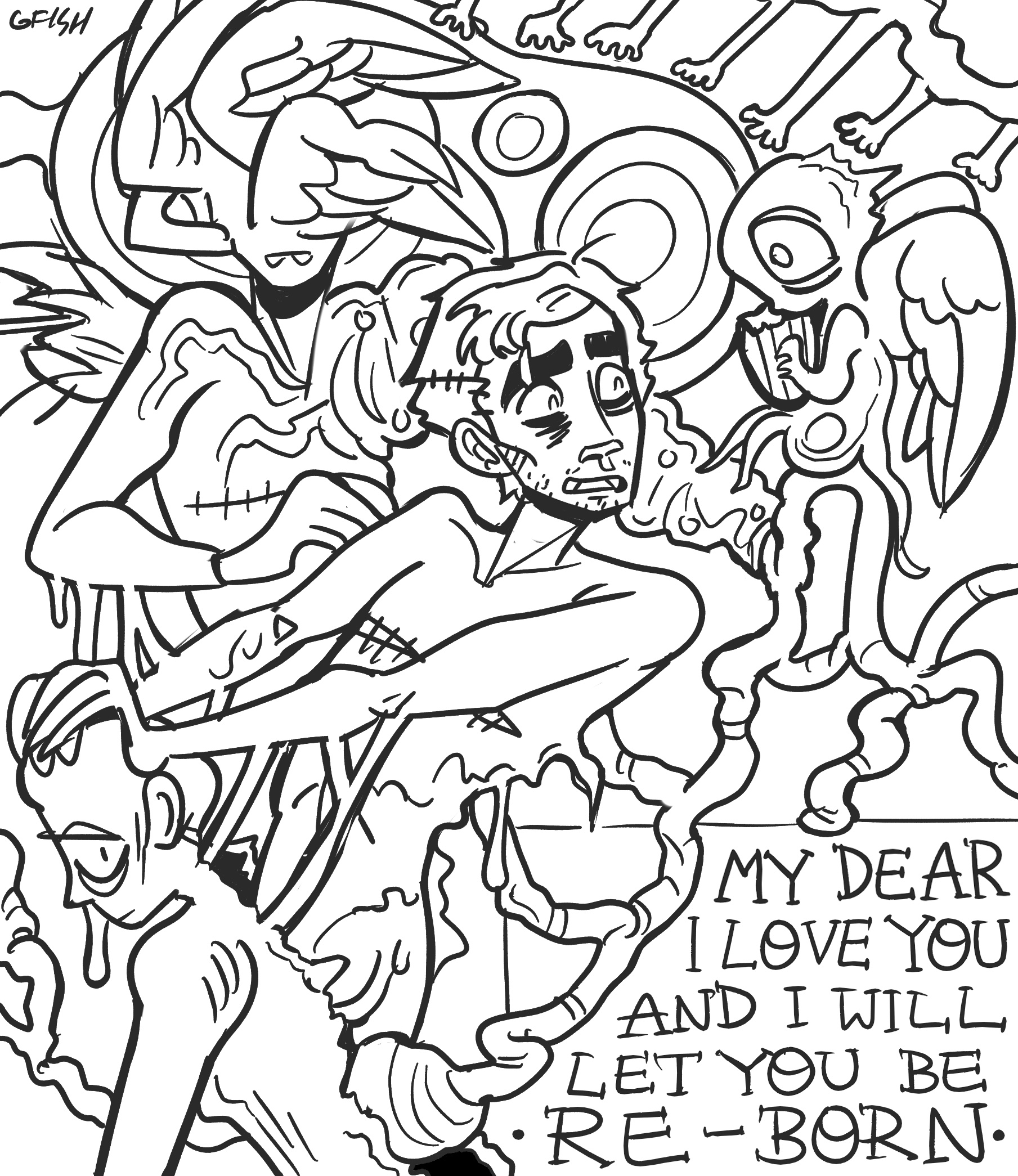 These are really well done, and quite unsettling! You’re very talented.

Thank you! They improved in quality as I started to feel better… did the first ones while on the verge of psychosis.

you got a thing with embryo’s and guys, idk what it signifies

are you a goth or something?

Well the embryos are directly related to my symptoms, I get alien pregnancy delusions every few years for some reason… and the guy is a character of mine, since I write him as schizophrenic too it was easier than drawing self portraits. I didn’t want to draw myself naked but it’s too vulnerable a series for clothes.

I would be goth, but I get bored with the lack of colour

Would that be emo then?

More like that post apocalyptic wasteland stuff… in my dreams. In reality, just a lot of aloha shirts.

Very cool. I like the intensity of the pieces! You really are saying something with meaning!

I used to hang out with this english man. he would make me cassettes of music to listen to and it was like System of a Down and other hardcore bands…anyways he was an artist that would often show disections of humans and stuff like that…I like your work although graphic for me.

Thanks, I actually do study dissections / autopsy photos sometimes… as a kid I was trying to do away with my weak stomach, but it soon became an artistic fascination. Tangentially related, this series started when I heard some music that triggered my sz a bit