I honestly don’t know much about him, other than he started the religious movement called Thelma and was very much into occult subjects.

I’m curious if any of you have much interest in Crowley or occult subjects? 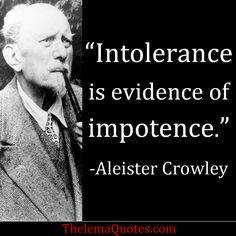 I used to read a lot of occult literature when I was very young. It’s all hogwash and Crowley was an ■■■■■■■.

in ’ supernatural ’ the tv series the devil is called crowley…

I’ve heard of this guy. Apparently he was…noteworthy and insane.

“Do what thou wilt shall be the whole of the Law.” I’m not sure if he was insane, but he ruined a lot of lives. I don’t like him as a person, but I appreciate what he contributed. But that’s just me.

This guy was an absolute monster!

Apparently he was…noteworthy and insane.

I like his tarot deck. Not because I believe in this cruft, I just find it beautiful and interesting.

There are many that consider crowley the father of the occult. Whether he was or not, the man was insane and yet turned a lot of heads. I have one of tarot sets and they are beautiful.

As for the show Supernatural, Crowley is a cross roads demon that has decided to take over as King of hell because Lucifer has been locked in a cage with the Arc Angel Michael and can’t get out to rule Hell. I’m a couple seasons behind so if anything has changed I’m not aware but it’s a good show.

Can’t touch occult stuff. Creatures/demons love the invitation and flock to me.

Supernatural was a great show for my demons delusions. It helped a lot. Btw, it’s still the same, lucifer and michael are still locked up and crowley is still the king of hell.

I also love the art on his tarot deck. I can’t make that deck work for me at all, but the art is really cool.

I do know he was also involved with the Order of the Golden Dawn and he hung with W.B. Yates, which I think explains some of Yates’ more out there poetry.

I have a huge weakness for Egyptology and when I was growing up I ran across Crowley and his Book of Thoth, it really caught my attention. I never saw him as insane. He reveled in not accepting social boundaries of his age. His religions and actions were beginning to stand out in 1920. He didn’t like the rigidity of social manners of 1920+

Some of the people who latched on to him in his life were far more out on the fringe then he was. He still went to Cambridge, he was still an upper crust. Some of his followers were very charlatan and media hungry; in walks Madame Blavatsky and her “powers” to see all.

He loved the notoriety of being scary and being “the beast” but he really didn’t do anything all that beasty. He traveled through China and India in the 20’s. I considered him more of a curiosity like Anton LeVey.