A nice review has just been published in a journal of good standing (impact factor 6), and is available freely under the CC-BY license. A quote:

Schizophrenia is a mental disorder that presents with various symptoms, such as hallucinations, delusions, abnormal behavior, decreased motivation, and cognitive deficits. The first study on Reelin abnormalities in schizophrenia revealed that RELN mRNA, which encodes Reelin, and Reelin protein expression levels were significantly lower in the postmortem brains of patients with schizophrenia than in non-psychiatric subjects [39]. Furthermore, the expression levels of RELN mRNA in the whole blood of untreated schizophrenia patients were significantly lower than those in healthy controls [40]. RELN mRNA expression levels were elevated in patients with schizophrenia by a 12-week treatment with olanzapine, an antipsychotic, suggesting that alterations in RELN mRNA expression levels are associated with the effects of antipsychotic treatment [40]. In recent years, genome-wide association studies and meta-analyses indicated that rs7341475 and rs262355 genetic polymorphisms in the RELN gene correlated with the onset of schizophrenia [41,42,43]. The missense variation c.9575 C > G (p.T3192S) in RELN was identified by whole-exome sequencing with samples from three affected individuals and one unaffected individual in a Chinese family with schizophrenia [44]. A de novo copy number variant (CNV) analysis of Japanese schizophrenia patients recently revealed a new pathogenic deletion (12.6 kb) in RELN (RELN-del) [45]. Taken together, these findings indicate that changes in Reelin expression and genetic variations are risk factors for schizophrenia. In exon-targeted resequencing using next-generation sequencing technology, rare variants of the DAB1 gene (p.G382C and p.V129I) were detected in patients with schizophrenia. Furthermore, these mutants of the Dab1 protein were more unstable than the wild-type protein, which may diminish Reeln-Dab1 signaling and contribute to the pathology of schizophrenia [46].

On a Japanese patient with RELN-associated schizophrenia:

A recent CNV analysis of Japanese schizophrenia patients identified a novel pathogenic deletion (12.6kb) in RELN encoding Reelin in RELN-del [45]. A male schizophrenia patient with RELN-del exhibited positive and negative symptoms, cognitive impairment, and repetitive behavior. He also displayed atrophy of the left cerebral hemisphere, particularly in the frontal and parietal lobes. The amount of the NR6 fragment of Reelin was lower in his serum than in the sera of other patients [74]. Reln-del mice, genetically modified C57BL/6J mice that mimic RELN-del in the schizophrenia patient, were developed by genome editing with the CRISPR/Cas9 system. Reelin protein expression levels in the heterozygous Reln-del mouse brain were reduced to approximately 50% of those in the wild-type mouse brain and were barely detectable in the homozygous Reln-del mouse brain [88]. Moreover, Reelin mRNA levels were significantly lower in the heterozygous Reln-del brain than in the wild-type brain, suggesting that Reelin protein expression was down-regulated based on lower mRNA levels in Reln-del mice [87].

On directions towards finding some treatments based on the Reelin pathway:

[…] suggesting that Reelin signaling is activated by an ADAMTS-3 deficiency. Therefore, the inhibition of ADAMTS-3 may be a candidate for the clinical treatment of neuropsychiatric disorders, such as schizophrenia, by enhancing Reelin signaling in the brain [87].

So, I assume there’s no current drugs that target this pathway correct?

I only glanced across the review, but I think there are no drugs specifically designed or tested in a clinical study for this pathway.

But this ADAMTS-3 thing is a good direction for further research.

In a different field (stroke medicine) there are efforts to activate the reelin pathway in order to improve functioning after a stroke. Here is a recent article (October 2021):

A figure of “reelin-loaded micelles” 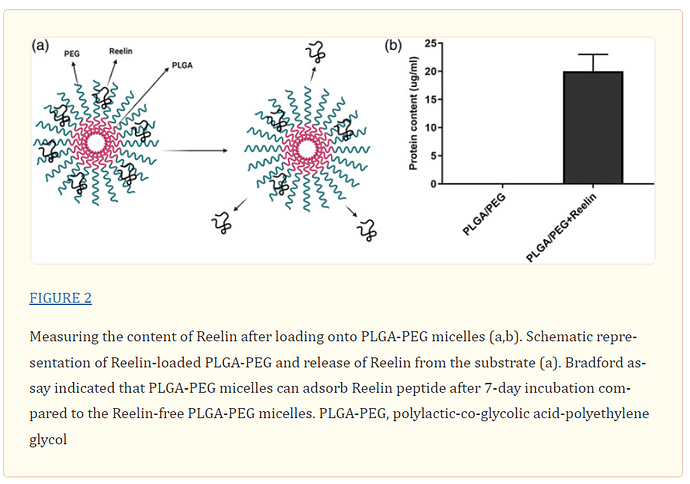 Lisa Kalynchuk et al. used direct infusion of reelin into brains of rodents with stress-induced depression, and this reportedly “cured” them. Of course, direct infusion is impossible in humans, it’s a risky procedure. Or… maybe when and if neuro-interfacing really takes off.

what is the functional activity of the Reelin in the health condition ?
what is its expression ?

Then,how do you explain that the quantitative change in the secretion of this protein (whatever percetage) inevitably causes the inducing of the existential symptoms that the sample feels /suffers from in isolation of the observation of the external observers and the diagnostic symptoms that are noticed and diagnosed by the Dr.

for example,what is the functional role of the Reelin in the mental life,behaviors and awareness of reality and its daily events in the scope of objective right /wrong (accepted ,expected or agreed upon
what is the casual relationship between the reelin functions and the symptoms of sz like delusions,abnormal behavior,cognitive deficit …etc

take insulin for example
its functional role in the health condition,and the effect of a decrease in rate of secretion that leads to the existential symptoms that the patient feels /suffers from or the pathological symptoms that diagnosed by the Dr. on the patient , and the medication and the result !

We insist to let you know that;
The THING that creates the existentialism features of the human psychological entity ,it possesses the basic ingredients that create the schizophrenic factor entity -too !

but on the top of this,there is something else that allow or does not allow the passage of the schizophrenic factor being into the place-time of the higher mental processes which encoded genetically and becoming a part of it ((of the mental processes ),and settles in the nature of the human being for an unknown time

by the penetration of the psychotic factor being into the internal pathways in which the electrical signals of the higher mental processes take place,which are preserved during their transmission from cell to another by genetic chemistry proteins !

but speaking about defective gene producing an abnormal substance that causing the sz condition or its symptoms is just an imagination that irrelevant the schizophrenia issue at all ,whereas the basic data of the theoretical hypothesis is not enough and are irrelevant the realistic processes of the sz condition

In one paper published in Journal of Human Genetics in 2012, authors found decreased methylation of ADAMTS3 in a group of 18 patients with schizophrenia, as compared with 15 healthy controls. The authors wrote that the same finding (hypomethylation) had been reported previously:

Among the 100 top-ranked schizophrenia-associated genes in the study of Dempster et al. 20 and the 589 genes we identified, there was one common gene, ADAMTS3 . Both studies showed hypomethylation of ADAMTS3 (Supplementary Figure 2).

They also note that a mutation of ADAMTS3 was reported in one person with sporadic schizophrenia:

However, ADAMTS3, a disintegrin and metalloproteinase with thrombospondin motifs 3, showed consistent hypomethylation both in the results of Dempster et al. and our results. Although the functional significance of ADAMTS3 remains unclear, a recent exome study identified de novo mutation of this gene in a patient with sporadic schizophrenia.34