Here’s a link to a relatively new company, started by a schizophrenic lady! She makes stigma-busting t-shirts and prints. Her point is to start a conversation about this.

She talks fast, fyi, she reminds me of me when I’m half manic and very chatty lol.

Schizophrenic.NYC Why We Do It

Schizophrenic.NYC was created by a Schizophrenic New Yorker who wants to make a difference in the way the mentally ill homeless are treated in NYC as well as change the way New Yorkers feel about mental illness.

I like the backstory behind “don’t be paranoid, you look great” line and I kind of want to get a bracelet that says that.

She reflects pretty well how I picture most people makin a living in New York… fast, enterprising, and with a tinge of dubious optimism. Not that I’d know, ofcourse.

It’s a good effort though, I suppose.

yeah it’s what I thought at first as well… I imagine it is a bit of a compromise to make paranoid thoughts relatable to a wider audience. I like the main idea of the Rorschach though.

Because I talk that fast or faster

Because I talk that fast or faster

Ah some nice soul should invite her to the forum…

I can’t do twitter…other wise I would do it…

I have the bracelet and one of her shirts. I love them both! The bracelet is very therapeutic. 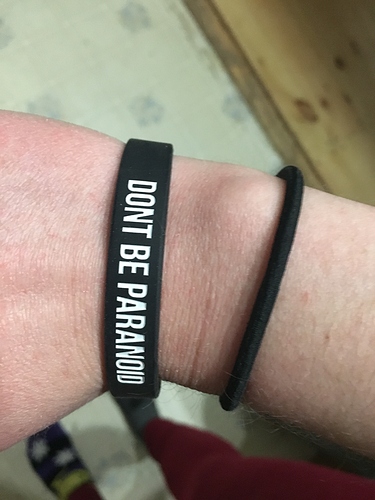 My wife got me a shirt for my birthday. It says “I do what the voices in my wife’s head tell me to do.”. I am not sure where she got it from. I wore it to school and everyone thought it was funny. Don’t think they knew the jokes on me though.

I got a Tshirt in Branson, Missouri, the misfit clothes, it was made wrong,

got it cheap, anyway, it was 3 colors, pink and blue with a white stripe down the middle.

For the longest time that was my religious shirt. It said nothing on it, but was significant.

Anyway, thanks for sharing about this woman.

the adult women with Down syndrome refuse to be called that,
and even my son, I don’t know, he sometimes makes faces and

cries in the mirror. I wonder if he knows he has Down syndrome.
I don’t think anybody wants a disability.

Reminds me of the first time I saw a guy wearing a B.U.M. Equipment shirt. Okay, I thought, not everyone can get it up, but advertising it???

I don’t think anybody wants a disability.

I think in some ways you can say I am mildly disabled, but I am certainly NOT handicapped.