This is a fun one.

I thought the result would be chaotic neutral but I got true neutral.

Try not to think too much and answer what you feel best.

I got Neutral Good. It isn’t very surprising because in the D&D game I play, my easiest character to roleplay is a Neutral Good aligned character. It comes more natural to me than my lawful good paladin.

I was between neutral and chaotic good. My character is chaotic good, and I love playing him.

Chaotic good is fun to play! They’re a bit crazy but kind hearted deep inside.

My character is a sorcerer who ran away from magic school and hates fighting but is really good with defensive spells.

My most recent triumph was telling a joke to a triceratops that made it laugh so hard it fell into a burning building!

Awesome! I have a few. I have a dogooder paladin who is involved in The Order of the Radiant Heart. A Neutral Good wizard who came from egg farmers but showed some talent in magic by speaking to a rabbit. And one who has a darker story. A Phantom (ninja) who was stranded on an island in the east for a few years where he learned the ways of ninjutsu. He returned to his homeland to realize his family had been murdered. He sought revenge and killed a man then fled. Now he wanders around Baldur’s Gate. He did join a fellowship of adventurers but his mentor was manipulated by an imposter posing as a watcher of Helm. His mentor ended up being burned at the stake. My character is currently seeking out the remaining members of the fellowship. One has recently been enslaved by an evil sorceress. He may have to do some evil things to try to free her. He’s true Neutral and generally does what he wants though he is fiercely loyal.

Ah the outlet that is DnD… such a fun experience with good friends.

I usually get neutral evil for these things because I’m a bit cold and calculating when the going gets tough. I’m trying my best to get to neutral.

I just love these memes and thats where I actually found out about this moral alignment thing. 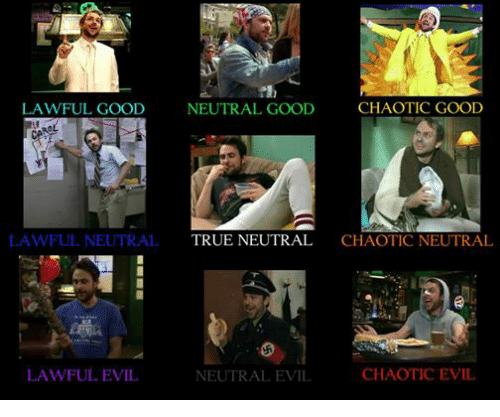 I got Lawful Good. I’m fairly happy with that result.

I got TRUE NEUTRAL

True Neutral- A true neutral character does what seems to be a good idea. He doesn’t feel strongly one way or the other when it comes to good vs. evil or law vs. chaos. Most true neutral characters exhibit a lack of conviction or bias rather than a commitment to neutrality. Such a character thinks of good as better than evil after all, he would rather have good neighbors and rulers than evil ones. Still, he’s not personally committed to upholding good in any abstract or universal way. Some true neutral characters, on the other hand, commit themselves philosophically to neutrality. They see good, evil, law, and chaos as prejudices and dangerous extremes. They advocate the middle way of neutrality as the best, most balanced road in the long run. True neutral is the best alignment you can be because it means you act naturally, without prejudice or compulsion. However, true neutral can be a dangerous alignment when it represents apathy, indifference, and a lack of conviction.

I got neutral good which I feel is fairly accurate lol

Lawful Good- A lawful good character acts as a good person is expected or required to act. He combines a commitment to oppose evil with the discipline to fight relentlessly. He tells the truth, keeps his word, helps those in need, and speaks out against injustice. A lawful good character hates to see the guilty go unpunished. Lawful good is the best alignment you can be because it combines honor and compassion. However, lawful good can be a dangerous alignment when it restricts freedom and criminalizes self-interest.