Did someone slip something in the mod’s drinking water? Will they turn into potato wolves at the next full moon?

The poor mods have been working overtime these past few days!

I know, even the popcorn thread was closed. I thought that came from pixel and Patrick .

Omg I would love to turn into a potato wolf! Fingers crossed! 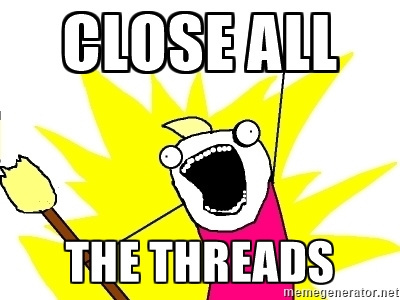 @firemonkey, we’ve had an uptick in personal attacks and inflammatory postings this week, some of which has spread to private messages. We’ve been observing and receiving reports of people becoming more anxious, paranoid, and unstable as a result of current events and people’s behavior on this forum.

Since this is supposed to be a support forum, not a politics forum or a general discussion forum, we’re going to have to moderate more strictly until things settle down a bit. The well-being of the posters has to take precedence here.

I’m glad to see some of the rules being enforced, I’ve always said this is a Sz forum not necessarily a social hour or sex therapy.

Could it be possible to add all the rules to the FAQ? I didn’t find mention of the rules like

No political threads
No religion debates

@firemonkey, we’ve had an uptick in personal attacks and inflammatory postings this week, some of which has spread to private messages.

Unless someone attacks me by private message first I wouldn’t use the PM option for having a go at people.
WYSIWYG with me.

Since this is supposed to be a support forum, not a politics forum or a general discussion forum,

It’s a tricky one with politics. It can be contentious and yet it would be dishonest to say that political decisions don’t affect us as people with mental health problems, and that sometimes it might be therapeutic to talk about those issues.

General discussion - So long as it is kept in the Lounge and people are civil I don’t see the problem. If general discussion threads are swamping support like threads then one option might be to limit the number of general threads that can be made each day.

I am a fan of the way things are being handled as is.

@firemonkey people here are triggered by the smallest things, and this is a support forum, not a social media website.

We’re trying to take that into account when we moderate political posts. One user has paranoia about internment camps. Others are afraid they’re going to lose their insurance or be victims of racial violence. Many have anxieties about war.

We understand that they need to talk about those things - they’re intimately tied up with their mental health, and that’s what we’re here for.

We also have other users who have taken this opportunity to taunt and attack and mock people who are suffering right now. That is never acceptable here.

We’re trying to find the line between mental health posts and ideological posts, and it’s not always clear. Sometimes something that seems okay at first takes a slow negative slant. Sometimes someone has a legitimate mental health angle but can’t keep the post from becoming inflammatory. We’re doing our best, so please try to be patient and understanding with us. We’re just people suffering from mental illness, too - we’re here because we need the support, too.

I’m glad you wouldn’t take to PMs to attack people. Unfortunately, not everyone has followed your example. It’s been a rough and ugly few days.

and this is a support forum, not a social media website.

I agree that is true,but part of support is surely having a social connection with others which includes discussing social issues. We are more than just our illnesses though it can be hard to see that for some of us(well it certainly is for me).

Are these regular users or visiting trolls? As a past victim of such tactics(not here-elsewhere) I can see the need to protect people.

I don’t get triggered with politics, but a lot of people do. It’s what I’m trying to tell you. I moderate another mental health forum, where political topics don’t even come to the surface, and people are climbing walls even without the trigger. A support forum is supposed to be a place to be peaceful and for a person to rest from the triggers, not to be even more triggered and riled up like it’s been happening here.

We’re doing our best to keep people safe inside their own heads. Hope you can at least empathize with that.

Hope you can at least empathize with that.

of course I can. I am one of the least monster like posters here. I just think that part of support is the chance to be social with others and to step outside the framework of illness.
As someone who has no social network IRL outside of family coming here and discussing things socially is therapeutic.
Especially as I struggle with social communication at the best of times and don’t find informal conversation easy.

You’re no monster at all, firemonkey.

There are plenty of ways to be social without triggering others. We try our best to keep those triggers to a minimum.

Firemonkey, I don’t think anyone is accusing you of being problematic right now. But lots of people are, and the mods are trying their best to balance people’s need to talk with people’s need to be protected from themselves. Like rhubot said. It’s all hopefully going to die down in a week or so.