In Russia they make a vaccine against HIV. She has been tested since 2011

In Russia they make a vaccine against HIV. She has been tested since 2011.
Yes, I know that other news is important now. But I want to say again that Russia is not a backward country. I heard that in Europe and the USA, many people think so. At this forum, one of the participants was surprised that we have sick leave in our country. I also want to say that the son of my friend is undergoing surgery at a research institute, free of charge. We have our problems and our achievements.

We don’t allow links to non English speaking sites @EldarfromRossia . As per the forum rules:

It is our policy to warn anyone showing flagrant disrespect e.g., foul language, and to delete their disrespectful posting. If this disrespect persists, the member is banned from the community.

No advertisements (for research subjects, support for special projects, or commercial enterprises), or internet links to web sites promoting these activities are allowed. If someone has a research project that they want to publicize - then email the administrator at szwebmaster at yahoo dot com - and if the posting is accepted, one of the moderators will post the message.

Unfortunately, we do not allow links to other, non-English speaking websites (because we can’t determine their content).

Decided to just remove links instead of closing/hiding topic.

There are two seperate credible reports of people recovering from HIV that I have read about have been researched for validity. One was in San Francisco and the other is recent, a lady from I think it was Esperanza, Argentina. In Tijuana there was also a time where a newspaper published an article about a cure for HIV. There were some people who had conspiracy theories about it being under reported but I think it was just a conspiracy theory, I think they might have found something that could remove the virus in cells while under a microscope but maybe not on an actual person.

Something about scorpion poison lol don’t really remember but I mean I’m pretty sure people have heard about the miraculous healing power of scorpion venom.

I think I read somewhere that thorazinewas discovered from a spider bite in the Amazon rainforest but eh, maybe they’re just urban legends?

I do think though the cure for HIV is possible though.

My links to the site have been removed. I argue this by the fact that the links to the site are not in English. one reference was to the research institute where one was published. the second link to the press in which hto wrote. The Minister of Health of Russia also confirmed this information. But forum rules…

Here’s one about the Argentine woman.

Woman’s own immune system has possibly cured her of HIV

Researchers were unable to find any viable HIV in the woman’s body even after using highly sophisticated and sensitive tests to scan over 1 billion of her cells.

The case in San Francisco was a man.

Hah and to think as a kid I used to well mediate spiritually on a cure being possible. Sorry not trying to bend forum rules, just came to mind. Funny how much life has changed since.

Yes, I read that there is a certain percentage of people who do not get sick with HIV. something to do with genetics. I don’t know how reliable this information is, but I want to believe it.

I also think it’s possible. I also think there might be a cure for schizophrenia. I believe in it. and it will be done. providing sick people is expensive for the economy, it is more profitable to identify. This is one of the good sides of capitalism. What do you say about this?

Just going by the rules. Maybe that rule could be updated. I switch between using Firefox and Google chrome. In chrome the links do indeed offer a translate to english option. Firefox does not.

Thank you for trying. I use Google Translate. I think you can somehow configure other browsers, if this is not possible. then you need to think about how you can check the link and the forum member could read the information without knowing the language

I think every system has its pros and cons. Our health care system is free, but there is a queue for special examinations. for example, you must first go to a general practitioner, then to the right specialist, and only then do you take tests, and so on. The state allocates funds, the salary of doctors is less than mine. I earn 70 thousand rubles, a psychiatrist at a state hospital 50-60. But medicine is affordable, and if you are disabled, you can qualify for free medicines from Russian manufacturers. It’s not the best medicine, but it’s better than nothing. As a result, if there is no money for private clinics, then you can go to the state clinic and get tested, but spend more time. You have a different system, your doctors get more, and therefore smarter specialists go into medicine. but they will not treat for free. In Russia, usually like this, there are private clinics, there are public ones. but every state has a commercial department. for example, a rheumatologist from the Institute of Immunology, an hour of admission is 1800 rubles. it’s very cheap for a PhD. my psychiatrist costs 4,000 rubles an hour. This is a private clinic and private doctor. but he also works in a hospital and teaches at the institute. Everything is simpler with us, for example, I can write to the doctor on whatsapp and they will send me a photo of the prescription. I don’t go to him often, my condition is stable. when the war began in Ukraine, I called another doctor from the Serbsky Institute and he advised me what to drink so that I would fall asleep. I called him on his personal phone with his permission. He didn’t take the money. We also have sick leave, it’s like sick leave. You don’t go to work and you get paid. It works if you officially work and pay taxes. Also, for the paid services of doctors and the purchase of prescription drugs, 13% of the tax on the amount paid for services or drugs is returned.

If we had a better economy, then more money would go into medicine. and so the main funds go to the defense industry. Maybe I’m wrong. Yes, most likely because in the last five years I see better conditions in medicine and research. Yes, if the economy was at least like in China … But okay, I think everything will change for the better. even if they don’t buy all goods from Russia, we can provide ourselves with everything. But we buy good medical equipment abroad. But we also have something interesting. Okay, this is all speculation.

Tell us about your medical field and what country are you from?

Tell us about your medical field and what country are you from?

Don’t be rude. He was saying that we need to learn from those systems. 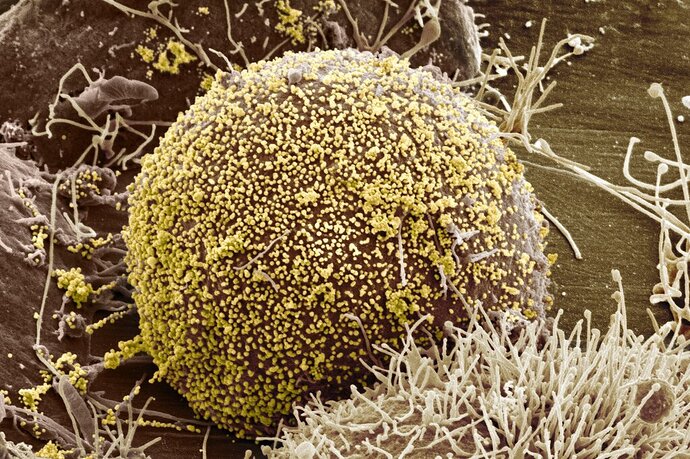 A Woman Is Cured of H.I.V. Using a Novel Treatment

She’s the third person ever to be cured. Researchers announced that the new approach holds the potential for curing more people of racially diverse backgrounds.

Looks like you have to pay to read the article. It focuses on umbilical cord blood.