Has anyone tried coconut oil with mct?

I bought this off Amazon, it’s supposed to be good for alot of things including helping with weigh loss. Just wondering if anyone has used coconut oil and had any positive results from it. 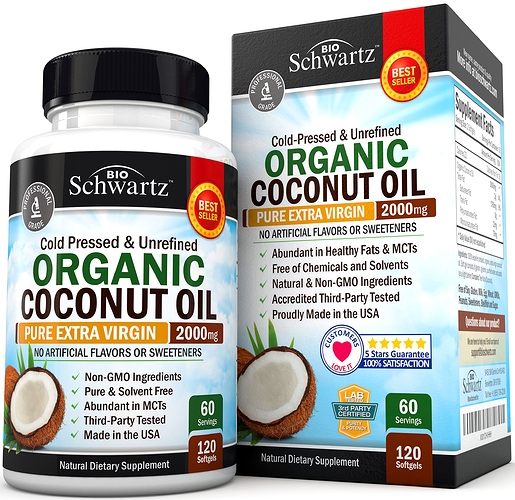 But look at the responses. People disputing that it’s really “poison” including @twinklestars

The guy who said it seems to be exaggerating a bit

I mean, coconut oil is saturated fat. Eating pills full of saturated fat won’t help you lose weight. The only thing I could see is that being full of oil might make you less hungry for other food, but a big bag of microwaved veggies would probably be more filling for fewer calories.

I’m not using it to eat less, but oh well.

This was the article I read that made me interested. Of course it could be biased.

I have never found some magic supplement that helped you loose weight. My mom puts coconut oil on here skin because it has health benefits. Not sure what they are I will have to ask her.

If you’re on a ketogenic diet it might help you. Because that diet is mostly fat. You wouldn’t be able to eat much in the way of carbs though.

Other than that it’s a fat. It’s not a trans fat but it is saturated so don’t eat too much.

Personally I’d rather have my fat in a tasty form like a nice coconut curry or butter chicken.

My brother told me about mct oil. He does keto, I tried it but ended up in the er twice with a gallbladder attack.

I’m going to try one pill a day to see if it does anything. If it doesn’t, no big deal.