An exercise programme devised by researchers at the University of Manchester has dramatically reduced symptoms among young people with first-episode psychosis.

The long-term prospects for young people who are diagnosed with psychosis are typically poor, with high rates of relapse, unemployment and premature death. The antipsychotics they are prescribed also cause rapid weight-gain.

Although exercise has been shown to be an effective treatment for people with long-term schizophrenia, no studies have assessed its effects on psychiatric symptoms in young adults with early psychosis, until now.

The University of Manchester study recruited 31 people aged 18-35 who had been referred to local mental health trusts for treatment. With the participants help, the team designed personalised exercise regimes which were carried out under the supervision of a researcher for ten weeks at local leisure centres.

Joseph Firth, the lead author on the study, said: “Establishing an exercise regime for people with psychosis is likely to be much more effective when they are younger, and in the earliest stages of treatment. Getting people into a routine early on also helps set habits for life, which can make a huge difference to their long-term physical and mental health.”

The participants in this study actually exceeded the target amounts of exercise; achieving 107 minutes of vigorous exercise training each week for 10-weeks.

This compares favourably with exercise programmes in healthy populations as well as in schizophrenia.

“Personalising exercise training to the activities which patients find most motivating helps them stick to their programme.”

At the end of the 10-week period, the participants completed a variety of standardised mental and physical health tests. As a control group, seven people who were treated by mental health services without an exercise programme were also tested.

On the standardised tests, the exercise group displayed a 27 percent reduction in psychiatric symptoms, which was significantly better than the control group. Their brain functions also improved, and they achieved a slight reduction in body weight – going against expected weight gain from normal treatment.

An exercise programme devised by researchers at the University of Manchester has dramatically reduced symptoms among young people with first-episode psychosis.

Sounds good but if like me you have always had difficulty with following exercise routines (all the exercises done too quickly for example) then I am not sure how much exercise routine would actually help. I think those with greater levels of physical dexterity would see the most benefit.

Why only young people, I am much older than this study group and I find that f.ex. bicycle riding is good for me, gives me a chance to lose some weight and get fresh air which is especially good now when I have not smoked tobacco in the past seven months.

The only exercise I’ve found suits my athletic/physical limitations is swimming and walking. Walking is ok if there is somewhere nice to walk but on my own I am limited to the built up town centre. Swimming is no longer an option since the swimming centre was moved from near me to somewhere out of the centre of town.
I do have an exercise bike but get bored after about 10 minutes on it.
I guess with this exercise plan they are trying to help people when young before the condition is too established.

I’m pushing 50 and find I’m more stable when I at least get out for a daily walk. Sitting around in my home is a surefire recipe for disaster.

Exercise helps everyone at every age with everything

I think to get more people into exercise/physical activity there needs to be more emphasis on tackling the social ostracization of children who are not good at gymnastics/sports. It is not unusual to be bullied and excluded if you are poor at such things. This can put people off physical activity during adulthood .
Schools should play more of an active role in combating peer group abuse of those who have difficulties with gymnastics/sports.

Transforming your body into one that feels twenty to thirty years younger is no longer a dream. For astronauts, this form of age reversal is essential. On long-duration space journeys, the accelerated “aging” that occurs as a result of being in a weightless environment causes crippling muscle and bone loss, as well as balance problems. The need for a program of age reversal became a call to action for Dr. William J. Evans, expert adviser to NASA and former head of the Nutrition, Physical Fitness, and Rapid Rehabilitation Team of the National Space Biomedical Institution. As a result of his remarkable success, readers of AstroFit can now achieve the same age-reversal benefits as the astronauts in training for an eventual journey to Mars. With AstroFit you will: Increase and maintain the rate of muscle growth, while trimming and sculpting your entire body Stop bone loss and the bone-thinning disease of osteoporosis Improve balance while counteracting muscle weaknesses and enhancing muscle “memory” Ensure permanent loss of body fat Reset your metabolism level Prevent muscle loss by following the fourteen-day muscle maintenance meal plan you will not find in any other book Strengthen your heart, returning your body to the cardiofitness level you had years earlier Reduce elevated levels of the stress hormone cortisol (the major aging hormone), stopping tissue loss, improving neural function, and preventing overall debilitation Boost your immune system’s natural protective ability to maximum levels Dr. Evans’s revolutionary program is based on scientific discoveries fully explained to the lay reader for the very first time. With an investment of just thirty minutes a day, AstroFit helps you shed extra pounds and provides you with a powerful, youthful body for the rest of your life. At the heart of AstroFit is an all-new exercise regimen based on Dr. Evans’s laboratory research for NASA. This bestselling author details the benefits of E-Centric training, which literally reverses the timing sequence of every strength exercise you’ve ever been told to do. The AstroFit exercises are divided into three progressive programs that can be performed at home, in the gym, or at your office, and require no special equipment. Dr. Evans also provides a powerful meal plan that allows you to eat for optimum health without ever feeling hunger. And throughout the book are first-person accounts attesting to incredible successes achieved in just ninety days. 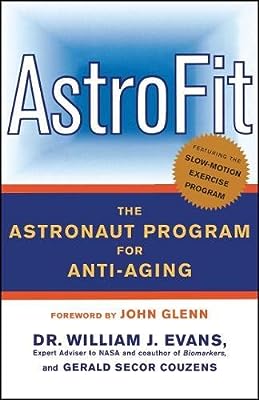 Transforming your body into one that feels twenty to thirty years younger is no longer a dream. For astronauts, this form of age reversal is essential. On long-duration space journeys, the accelerated ...