Let’s see what everyone thinks.

I picked Chick-Fil-A because they have the best chicken sandwich,

But I’ve been boycotting them for years.

I won’t touch chik fil a. Burger king is better, then Wendy’s.

Burger King chicken sandwiches bring back memories. I lived in a town where the only fast food restaurant available was a Burger King. I grew fond of their chicken sandwiches. That being said, I voted Chick Fil A. I don’t eat Chick Fil A often, the very first time I tried Chick Fil A was when I was about 28 years old. Mostly because they built one where I currently live. It’s right next to an In N Out. They usually both have a lot of cars in the drive thru. Especially In N Out.

I’d get a chicken sandwich from Burger King but unfortunately they closed down the nearest Burger Kings here. I have to drive about 20 minutes to the next Burger King… the Arby’s is even further away.

We have to drive about 40 or 50 miles to get to an Arby’s. Sucks because their beef and cheddar is my favorite sandwich.

On the bright side, we have a Sonic’s drive in within a 10 minute drive.

I like Arby’s but I get the regular roast beef sandwich. The middle one. I have tried their buffalo chicken sandwich though. I thought it was pretty good.

Chick Fil A used to only be in the mall. Now we have them everywhere. There is one within walking distance of my house. I am sick of them. And there is a Zaxbys across the street. I don’t like them either.

Arby’s is pretty good. They have a unique taste. I haven’t been there in a few years now. Last time I went to Burger King I was hoping to get a chicken sandwich but they were still serving breakfast. I ended up getting the croissanwhich or whatever it’s called. I like those too. Now I’m craving a BK chicken sandwich.

have you had arbys deep fried cajun turkey sandwich, thats the only thing ive had from there its amazing

Nope. The only thing I’ve had there recently is the gyro.

We have Chicken On The Way Here

I’d have to say dairy queen

I use to love chickfila I still do but damn… that pop eyes spicy chicken sandwich tho. 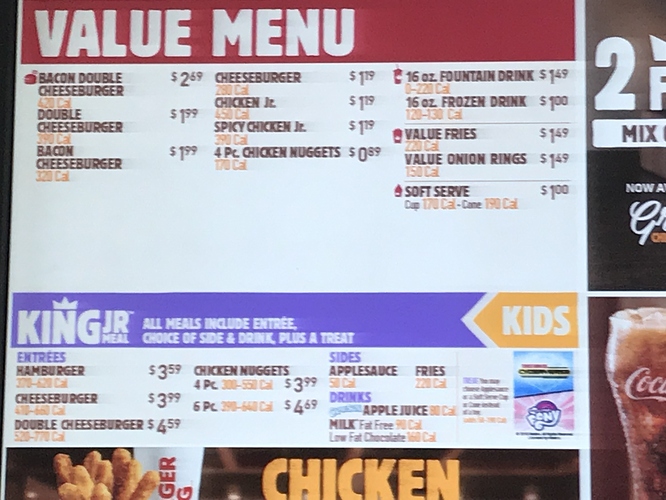