John F. Nash Jr., whose life inspired “A Beautiful Mind.” He died in a car accident last year, at age 86.
Now, the Nobel Prize medal belonging to the mathematician John F. Nash, awarded in recognition of his fundamental contributions to game theory, is set to be auctioned at Sotheby’s in New York on Oct. 17. It carries an estimate of $2.5 to $4 million, which if reached will cement the apparent dominance — for now? — of scientists over literary types in the rarefied market for some of the world’s most difficult-to-acquire gold jewelry. 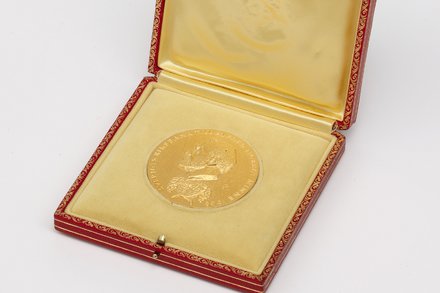 Mr. Nash, whose life inspired the movie “A Beautiful Mind,” won the Nobel Prize for economics in 1994; Sotheby’s will hold the auction on Oct. 17.

That’s sad that his family won’t be able to keep it.

Hopefully the medal goes to a good place. It belongs in a museum.

I would’ve bought Faulkner’s. It is sad that Nash’s medal is up for sale.

Hopefully proceeds will go towards schizophrenia research or math scholarships or something. It would be fitting.

Last I was in touch, his son was a pretty sick schizophrenic.

That’s a pity that his son has Schizophrenia. Maybe the money from the award selling with go to make sure he can live a comfortable life. I say that is fitting contribution that a father can give his son.