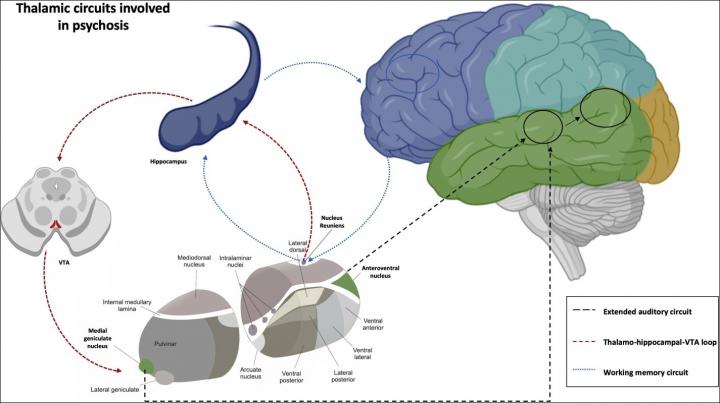 A study from researchers at the University of Geneva Medical School, Switzerland reports that auditory hallucinations, a phenomenon in which people hear voices or other sounds, may arise through altered brain connectivity between sensory and...

" hallucinations,a phenomenon in which people hear voices or other sounds in absence of external stimuli"
They reducing the whole phenomena in single statement by using descriptive expression that is significantly below its ability to describing the reality of the most complex phenomena that challenge all medical theories

The question:
Is this brief summery be enough to make the cultural reader understand the sound’s nature and the complaint from listening to it ?

They did not give any description to explain the nature of phonetic material,rather,they went
to search for genetic / functional cause causing listening to such voices and presented it as being a final cause for the hallucination whole condition and the schizophrenia and many other cases

From the actual realty,the hallucination transmits a speaker transmitter have higher energy than any brain transmitter ,the attention level increases by (x) degree after listening to every single sound message,and the value of (x) increase / decreases depending on the time of the message lasted (the high energy of the speaker transmitter of hallucination is the real cause of hyper -connectivity between sensory and cognitive processing )

In this report,the hallucinations is merely a voices be heard by people without real external stimuli -nothing else !
This is not enough to achieve reasonable understanding or correct explain to what is hallucination in itself or find any relationship between anything and hallucination

For example:
1-If the person listens to voices,how do you explain the person’s complaint that voices he listens to is able also to read his personal thoughts ,or that is not important to interest ?

2-In fact,the person does not listen to physical voices at all, but there is an ultrasonic wave transmits the thoughts content in two opposite directions,from the hallucination’s emitter to the conscious mind of the person,and from the conscious mind of the person to the hallucination
3- The person in the case of bilateral dialogue through exchanging the higher mental information with the thing called hallucination in 2 opposite directions not only in the case of hearing a sound - is this not important to look at ?
4- You cannot listen to the sound material by the ears

How you can search about genetic disorder for things that you cannot sense or diagnosis them by any lab tools ?

By the influence of the pathogen (hallucination) on the cognitive signals that are exchanged between the cells of brain regions throughout the transmitters and receptors;

These concepts that be using by the person’s mind to understanding all internal events,external phenomena ,environmental effects ,daily life events,restored memories ,imaginations, all types of feelings,abstract reflections ,the causes of any action,predicting the events that may be happened in the future and to aware with the impact of all of this on the person’s security and achieving living requirements

The condition cannot be described as cognitive insufficiency for mental causes or genetic,because the cognitive change has been occurring by action of external factor (hallucinations) which is not a production of the genetic material functions or the mental functions outputs