Its a fusion of indian chinese food… my favourites being chilli panner and vegetable manchurian.

I ate once at a Chinese/ German restaurant. A half hour later I was hungry for power.

I don’t know any Indo-Chinese food but I ate this since young. 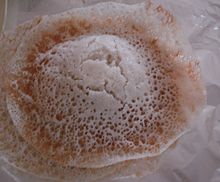 Appam is a type of pancake, originating from the Indian subcontinent, made with fermented rice batter and coconut milk. The origin of Appam is disputed and potential sources of origin might be Sri Lanka or the southern tip of India. It is a common food in Sri Lanka and the Indian states of Kerala and Tamil Nadu where it is eaten most frequently for breakfast or dinner. Vir Sanghvi, an Indian journalist, quotes food historian K. T. Achaya and states that the appam is mentioned in the Tamil Perump...