Anybody watching the Republican debate in the U.S.?

The Republican debate is on CNN now. Its been interesting.

sorry no…
but sending you a hamster

and a rainbow.
take care

No, but I read about the circus show insult contest that went on, mostly by Trump.

Thanks Darksith. Definately need it. The debate was interesting. I’ve never watched a Republican debate nearly completely before and i heard some ideas and thoughts that resonated with me. The thing i realized by watching is that it seems that many Americans feel just as desperate for change in the U.S. as when Obama first ran which says alot about peoples overall perception of progress or lack of in this country…

Rand Paul is my favorite, but I doubt he will win the nomination. He is one of rare Senators who has worked hard to protect our privacy from government oversight, you know there would be change with him. The Freedom Act is something I’ve been watching closely, though I wish it extended into eliminating this black list they have of people accused of being domestic terrorists, the previous presidents we’ve had want it in place because they don’t want another terrorist attack on their watch, but all it does is invite the government to surveil, wire tap, and torture average citizens.

Why to watch any Republican events, when we know that Hillary Clinton becomes a President. Well, I do not have the right to vote in the US and so why to watch any other political events either.

I like Ben Carson but his religious beliefs seem stupid like a flat tax of 10% as he said is stated in the bible. I don’t think we should use the bible for things like that. He seems like a genius and level headed. I think he would make a great president. Time for scientifically minded people to be in the White House.

What about Bernie Sanders: http://www.huffingtonpost.com/news/bernie-sanders-president/

Joe Biden is the next Manchurian candidate in my opinion.

Are you getting constant political calls now? One of the joys of living in this state

I was part of the Quinnipiac survey that just put Sanders ahead - they called 3 times before they got me and were leaving messages saying, “We will try again!”

I saw the debate, I found it to be Entertaining.

Nah I’m giving up on politics and moving to lighter things. I’m tired of all the rudeness, it’s like a bad circus.

I watched some but I don’t take it seriously.
I think democracy is too easily abused and corrupted, politicians are just charismatic salesmen and commoners who get put in a position of power they naturally shouldn’t be in.
They become easily swayed by lies and evil whispered in their ears.

Hilary will win hands down once the campaigning really picks up speed in January through next November.

Hilary will win hands down

I certainly don’t want a Republican to win but I am no longer interested in voting for Clinton. 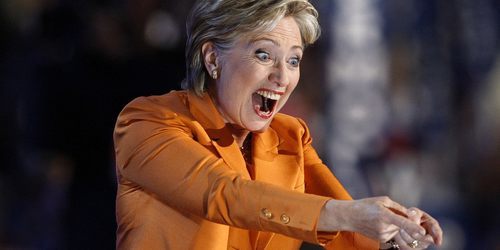 I rather Bernie Sanders the socialist win than Hillary Clinton.

People need to get the facts straight on Socialism before they start claiming what it is/isn’t. In socialism, there is no “middle” class, just one class of equal people. Sanders is campaigning on “re-establishing the middle class.” Bernie is NOT a socialist. At best, a social-democrat.

People that claim Obama is a socialist are way out of line: He has killed 9 MORE times as many people as Bush has with drone strikes, Obama has bailed out BANKS, but not bank employees. Obama bailed out big auto companies, not a single automobile employee. Obama kicked 2.2 million Americans off of food stamps. Yeah, real progress here (eye roll).

. Sanders is campaigning on “re-establishing the middle class.” Bernie is NOT a socialist. At best, a social-democrat.

I am not sure what he is,apart from being rather left wing by US standards.

Social democracy, political ideology that advocates a peaceful, evolutionary transition of society from capitalism to socialism using established political processes. Based on 19th-century socialism and the tenets of Karl Marx and Friedrich Engels, social democracy shares common ideological roots with communism but eschews its militancy and totalitarianism. Social democracy was originally known as revisionism because it represented a change in basic Marxist doctrine, primarily in the former’s repudiation of the use of revolution to establish a socialist society.

Social democracy: Social democracy, political ideology that originally advocated a peaceful evolutionary transition of society from capitalism to socialism using established political processes. In the second half of the 20th century, there emerged a...

Some might say that it’s a mild version of socialism .

I really don’t know much about Bernie Sanders or Rand Paul but from what I’ve heard it sounds like they’re outsiders.

No candidate for president has a snowball’s chance in hell if the political elite in the USA doesn’t back them, so I think there’s no chance of Sanders or Paul. At best they can hope to raise awareness about specific issues and force the mainstream candidates to address issues that they would have otherwise ignored.

Although Trump makes me want to puke, I’m happy that he brought up ending birth right citizenship in the USA.

I’m betting it’ll be Bush vs Clinton 2.0 in 2016, with Clinton easily winning the election. I’m curious to see if Rubio, Carson or Fiorina will be the next VP for the repubs. I have no clue who will be Clinton’s VP.

I like Bernie but only because he wants to raise minimum wage. But I’m still on the fence about that. What will that do to small businesses?

But I think people are stupid and don’t understand that Politics is a science, which leads us to our stupid headlines on the tv Which leads us to Trump. Most people I talk to say no to Trump. This is my first time having an actual discussion on Politics where the President isn’t guaranteed. aka the 2nd term curse/blessing