A Case for Thalamic Mechanisms of Schizophrenia: Perspective From Modeling 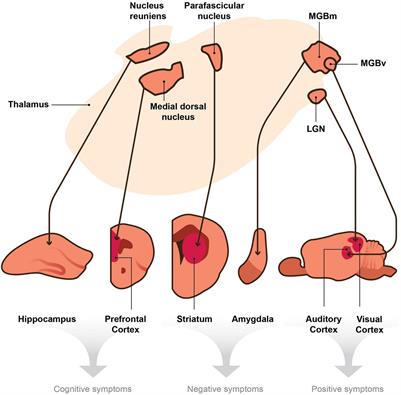 A Case for Thalamic Mechanisms of Schizophrenia: Perspective From Modeling...

Schizophrenia is a severe, chronic psychiatric disorder that devastates the lives of millions of people worldwide. The disease is characterized by a constellation of symptoms, ranging from cognitive deficits, to social withdrawal, to hallucinations....

Oscillatory activity occurs within the thalamocortical loops, and that information from a single modality is broadcast across multiple cortical and subcortical regions via trans -thalamic circuits (Shepherd and Yamawaki, 2021). Moreover, these pathways send duplicate copies of motor commands through parallel projections, most likely creating a prediction signal. Disruptions within the prediction signal may generate false perceptual experiences or disturbances in cognitive processing, two of the hallmark symptoms in schizophrenia. Thus, seemingly disparate schizophrenia symptoms may be caused by a common mechanism: disruption within the thalamus-processing network. Given our recently gained knowledge of the genetic risk variants for schizophrenia, these predictions can be mechanistically tested in models carrying mutations carefully designed to match the human condition. This direction shows great potential given the progress in behavioral phenotyping translationally relevant psychotic, motivational, and other symptoms in rodents (Simpson et al., 2012; Schmack et al., 2021). Furthermore, mechanistic studies of thalamic dysfunction may soon be spurred by remarkable progress in the development of the thalamic neuronal 3-dimensional cultures [i.e., organoids ([Xiang et al., 2019](Frontiers | A Case for Thalamic Mechanisms of Schizophrenia: Perspective From Modeling 22q11.2 Deletion Syndrome)) and thalamocortical assembloids (Pasca, 2018; Xiang et al., 2019)] derived from reprogrammed human cells (Khan et al., 2020). For example, neuronal or synaptic abnormalities in thalamocortical or corticothalamic projections in assembloids derived from individuals with schizophrenia or 22q11DS could potentially inform us about new human-specific therapeutic strategies. Although the latter approach alone is problematic, as it cannot model the late onset of schizophrenia (organoids mostly consist of immature neurons), a combinatorial approach using both animal models and human organoid models within the established theoretical frameworks promises a way forward in our mechanistic understanding of schizophrenia.

Hallucinations may be conceptualized as perception in the state of wakefulness that is under-constrained by sensory input.

Such that prior knowledge provides an estimate for the prior beliefs held about an external signal, which then dictates the probability of certain behavioral responses.

This paper in pretty heavy in the advance neuroanatomy. A lot of the meaning is lost on me since it’s hard to conceptualise without a working understanding of the general functions of the involved brain areas.

It’s also interesting to read this theroy as a dysfunction of identfiable brain areas. When neurotransmitter theories scale to include actually neuroanatomy in a way it conceptually changes the context from it being mental health to a physical dysfunction in the brain. As complex as these theories are once the science is communicated they are much easier for people to accept.