What is all this about potatoes?

I’m new here and I’m really confused because I’ve been seeing a lot of discussion around about potatoes. What is it all about? What am I missing?

Step into the light and feel the warmth of the potato. Baked, fried or cooked, everyone is welcome. In the eyes of the potato we are all equal.

Ahaha! You will find that the folks on this forum have a terrific sense of humor. The potato threads are all meant in good fun 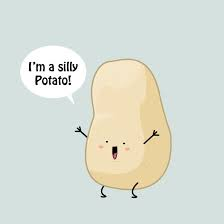 Ours is not to question the will of the Potato god. There are things in the universe that mankind is not meant to know. OK sorry, you have no idea what I’m blabbering about.

I thought it started in a religious thread that was about to get locked down because threads like that can be triggering to some members. I thought someone tried to lighten it up by substituting something like The Great Potato God…

As you can well see, the origins of the potato myth are shrouded in mystery, like aliens and ancient civilizations.

Lol thy will be potato…i was wondering if we would come off as a creepy potato cult to new people this thread kind of answers that lol.

Aren’t you glad you asked?

This too shall pass.

Squirrels know nothing of potatos…the potato will be here long after the squirrels have evolved into potato eaters.

These are the only words that can describe my love for the potatos.

I worship the rice Gods. I have forsaken the potato.

That would be me.

The Great Times Of The Potato Memes ended quickly, sadly.

Glad you joined us during potato season!

It all started when min min( the potato jesus) suggested we offer the pigfather some delicious potato. The great potato grew from there.

my next grandiose delusion

The God said ‘let there be potatoes’ and there was and it was good.

Life, liberty and the persuit of potatoes

And the right to bare arms… armfuls of potatoes

I’m new here and I’m really confused because I’ve been seeing a lot of discussion around about potatoes. What is it all about? What am I missing?

It means to make fun of the true God. Look! God is unlike the governor or ruler of this world. The people in any democratic country is King. They often disrespect governor and policemen. The people elect the President or Prime Minister. However, in the context of the Supreme Sovereign, it is God who chose the anointed ones.