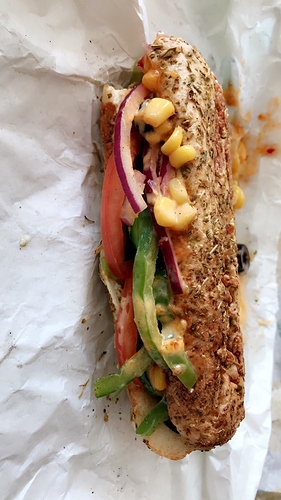 Actually, @anon80629714, I’ve been going to the Subway uptown quite a bit since I moved out on my own! Looks really yummy! Is the type of bread Italian cheese and herb? That’s my favourite type

Subway is good. I haven’t had it in ages, but I really like it.

Speaking of food, it must be getting close to lunch over there, @anon80629714?! Are you taking, or did you take an early one? I’m judging by the sub

That looks so good!

I have to try to not spend any money of going out to eat because I need the money for other things.

Meatball sub is the best

Do you have veggie patty where you live, ish?

I’ve only been in a subway once with a mental health group I was doing during one Christmas period. I always feel nervous at the thought of queueing up and ordering.

When we have so many good Italian delis around here that sandwiches are not much more expensive than subway…why would you go to subway ?

You can order online now. I get really anxious at trying to order. And it’s only made worse because I’m super short and can never hear what they’re saying because they are trying to talk to me through the glass wall thing. Then they get pissy when I don’t realize they’re talking like I’m intentionally ignoring them or something.

So yeah, online ordering is the only way I eat there.

Yes @sunlion but it’s too filling for my taste.

Why is that a surprise lol

Are you in the UK or US? Subway doesn’t deliver in my area.

US. They don’t deliver, but you can order and pay online then just go pick it up.