Exactly which is why we should get rid of categories like mild, moderate and severe, which bring in subjective connotations whether one wants them to or not, and instead focus on things that are more objective with clear meaning.

and instead focus on things that are more objective with clear meaning.

Objectively.: Live independently with quite a lot of support. Never worked. No 3D social network outside of family. Severe social difficulties ( described as having very poor social skills.)

Regarded as needing the help and support I get in order to be able to continue living independently in my own home.

Without getting into a pissing contest as to how bad we have it it would be interesting to see how others stack up objectively with regards to independent living/occupational-college status/social network and social functioning .

I think there would be much variation in the various domains between people. For example some people might have an adequate social network but not work, whereas others might work in a fairly high powered job but have little social network.

Yes I’m reading the forum, just must have missed it. Sorry

I had a full-time job last year that i had for 5years and last august i bought my home. shortly thereafter, something hit my and within 3 months i lost my job, career andbmost of my friends. Was able to find a another full-time and maintain it with freatg difficulty. Evaluating my past i see sign and symptoms of schizoid personality disorder going back into early childhood. Not sure if last year was my first delusional break or not. Undiagnosed Tactile hallucinations of severe burning pain in sunlight for past 2 to 3 years. Don’t know if there were any positive symptoms prior. Trying to examine life for that. Paranoia still present. Started back to school for a major change to start a new career. Been struggling a lot with classes
I have a bachelor’s degree, paramedic education (2years), and now working on 2nd bachelor’s degree…
Very High functioning until last year, feel moderate now because i’ seen the worst cases as a paramedic and don’t feel too far away fron that

Here we give simple public example to explain the complexity of the question through the similarity between sz case and the growing of weight .
if you supposed that there are 4 persons suffer from growing weight,what is the possible actions that be taking to deal with the increasing of weight ;

1- the first person do not using medical intervention to reducing the weight and does not regulates his food behavior at all,eating everything hour after hour without account-what is the possible results and its reflections on the behavior activities, job and relationship with others

2- Second person,takes medical intervention for awhile but he does not regulates his food behavior-what is the possible results

3- The third person,takes the medical intervention for awhile ,and regulates his food behavior,what is the possible results if he continue to do that forever (what is possible of bad side effect of med)
4- The forth person,takes the medical intervention for awhile,then he stops completely but he regulates his food behavior strictly forever-what is results

Notice that,each action has reflection on healthy condition,the method of life,job and relationship with new friends,and each case has many degrees

I don’t like the mild-severe categorization, and I don’t like low-high functioning, either. I think functioning levels vary widely based on your definition. In some areas, I am quite high functioning. I work full time, I’m married, and I have a large social network. But cognitively, I have really lost a lot of my skills. I like functioning wheels, such as this one, where you can score your functioning level separately in several different categories 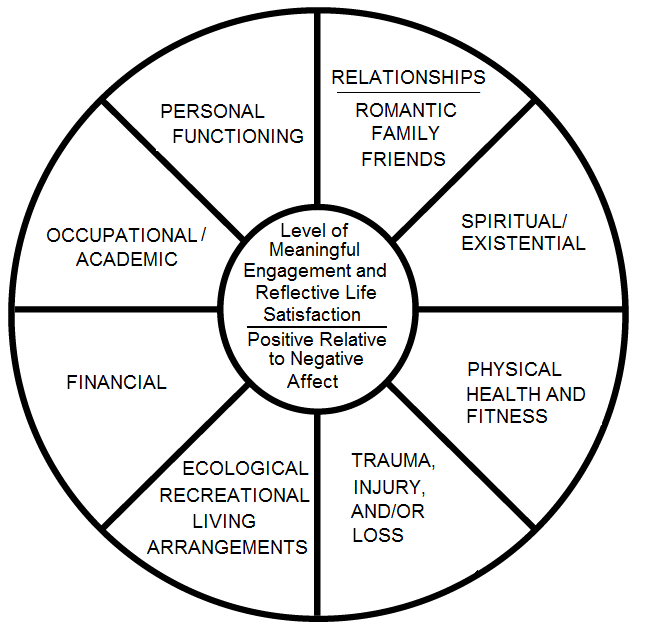 and I don’t like low-high functioning, either. I think functioning levels vary widely based on your definition.

Using functioning is ok so long as there is recognition of variation within and between individuals. Very few are exclusively low or high functioning. As with the non mentally ill we all have relative strengths and weaknesses .

The cognitive wheel seems a good idea. I’m not sure what personal functioning means that isn’t covered by other sectors of the wheel though.

i think the recognition of variation is easier to distinguish with that wheel than functioning/severity categorizations alone. too much to juggle

the possibilities plus confusion seems to be severely reduced.

much easier to keep track in daily life. nice one.

Personal functioning - Ok, but stepdaughter reckons this is because I have someone chasing me up on it.

Financial- Money management is quite good . Have splurges but never enough to get into debt.

Ecological, recreational and living- Not sure about ecological. Living arrangements are ok. Recreational activity centres round the internet .

Trauma,injury and loss- Last personal loss death of mother in 2010.

Physically health and fitness- Little to no exercise . Very overweight. Average health for my age .

Relationships- IRL - Contact with family. No friends . No romantic relationship

Doing this doesn’t really reflect how much help and support I need . It could be because I found it quite hard to work out what certain sections required .

I was told I had mild sz, although the doctor was referring to my symptoms rather than my functioning. It has certainly taken it’s toll. I also know there are people on this forum who have a harder time than I do.

I was told I had mild sz, although the doctor was referring to my symptoms rather than my functioning.

I certainly think that there can be a disjoint between levels of symptoms and functioning. Ie just because symptoms are mild doesn’t necessarily mean functioning is good.

So @Pat6398 what are your symptoms like? I’m still trying to understand everything. Seeing pdoc tomorrow for official diagnosis

Meds come with side effects.

Hopefully u put on a low dose.

May god be with u.

Hey @Phoenix90, I had a lot of paranoia and I was having thoughts of a special energy transferring between people. Over twelve months I had a half dozen hallucinations, all audible except one. I often heard people calling my name when they didn’t. I never had voices.

I was initially put on a high dose, and was brought down over six months.

Good luck today/tomorrow. Like @anon97118089 said, meds have side effects, but, at least in my case, the peace was well worth it.