I’ve seen a few of these online so I thought I’d give it a try. You might have to open the image and zoom in.
I absolutely suck at geography. Like really really suck.
Don’t ask me to do South America or Africa.

How did I do?
I know I got four things right. Did I get any more?
Please don’t flame me.

I know I suck. 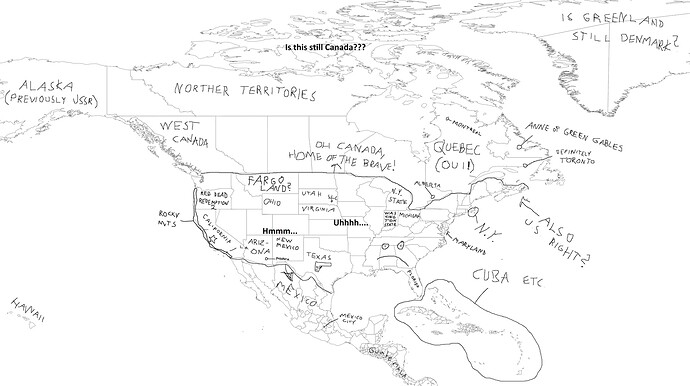 It’s there on the map! Was I close?

I know Alberta is a place in Canada because they mentioned it on Workin’ Moms.

As for the rest, you did as well as I would on a European map.

Oh wow I had no idea that was actually Arizona. I just figured Arizona is hot so it’s close to Mexico.

Well now I’ve learned where it is.

You did well, Padawan.

Virginia and Ohio are further East

It’s ok @anon9798425
Don’t be so hard on yourself.
My geography knowledge of Europe is horrible!

You didn’t do so bad!

My geography knowledge of Europe is horrible!

It would be fun to see you try Europe!

How well do you know geography? Take a challenge!

The map is too small for my phone

I did practice a lot once on Europe before I got bored with trying to learn geography so I should know a lot of the countries.

That is an old map of Canada. The “Northern Territories” are actually called the Northwest Territories and it was “cut in half” and a new territory called Nunavut was created.

So what you’re saying is the old Northern Territories is on that map and I placed it correctly?

I guess you could lump all three together and call them the “northern territories” as you have written but that isn’t their official names.

Maybe Northern Territories is in Australia.
Which I should really know because my grandmother is Australian.

Did I place anything in Canada correctly?

Did I place anything in Canada correctly?

You got Quebec right!

Looks like you did better than I would have done. Nice work!
You’ve got Alberta where Ottawa is, I think. (I’m in Ottawa)