Why would a man look at your hands with wide eyes? Sorry if this seems like an inane question

Maybe he was too shy to look you in the eye so he looked down?

what is wide eyes?

Maybe you have sexy hands and he has a hand fetish?

hell, i don’t even understand the God damn questions.

He could be trying to size your hand for a pair of gloves or a ring for later date time ?
That’s only thing I can think of that would make sense.

Either way I think you should be focusing on more important things than why some guy was looking at your hands. Guys look at girls a lot. It’s something that happens. Take that statement and apply it to every “a guy looked at me” question you have had or may have from now on lol.

If i were you i wouldn’t overthink it, guys are simple. 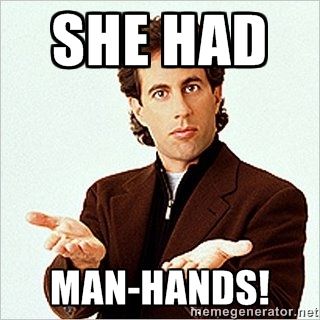 i’m sorry diana. i was annoyed with my brain. i’m gathering he had a surprised look on his face.

are your hands unique in some way? were you wearing a ring, loose bracelet, or such.

my initial understanding leans toward hands as creating. my ability to flip this question back to literally was lack.
i hope my goofy reply was not distressing.

Whoops double posted for the second time in recent days…