The people will go to the sprawling mansions of Bezos, Zuckerberg, and Musk…etc…with pitchforks and that will be the end of aspiring to become a dragon hoarding all of his coins.

This will happen. Heard it hear first.

I doubt there is going to be a revolution of that sort in my country in my lifetime. Never know though, if inflation continues at it’s current pace, anything is possible.

All countries around the world have some sort of socio economic class pyramid. 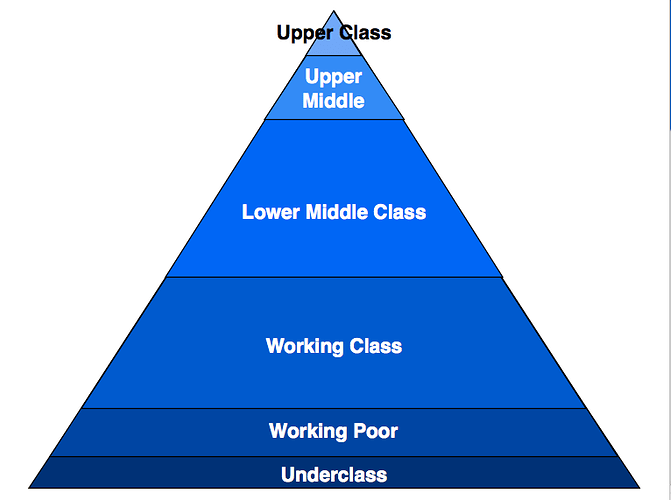 Standards of living is declining everywhere… Europe also, especially with the war in Ukraine. Wonder if a civil war is a possibility. Seems likely in the US, but not Europe.

Fomenting a civil war will not improve the standard of living of the lower classes.

Honestly if you’ve studied a bit of history nothing has changed. The big difference was after the war ( 2) where people had a pretty good standard of living and there was more of a middle class with leisure. Since then we’ve slid back to the standard that has always been…

High class with a lot of money and a burgeoning lower/middle class. It’s a bit different now with consumerism and I’m no expert but you can see the divide but it’s nothing new.

You have the power to vote in western society. If your poor vote left. If your rich you tend to vote right. The disconnect is the poor voting right but that is a whole other ballgame and we are then talking politics which isn’t allowed here…

Humanity had 250,000 armed conflicts. One for each year of human evolution. So if history is correct, then we can expect more. And we do, Ukraine is another one to that list.

If history teaches us anything the leaders of the civil war become the new upper class and a lot of the citizens who fought so hard to put them there go back to their original state.

Yes! That’s the plot of the book animal farm. It’s a classic.

I don’t think anyone should be homeless or starve to death.

I think everyone should have unconditional roof over head and vegan food and water.

On a plant based diet we could afford to feed everyone and the animals would not suffer so and better for environment.

We could afford to feed everyone and give everyone a roof over their head.

It’s another world being that rich.
They have more than one $30 million mansion .
G oh golly I can’t believe how much money they have.

I have read Celestine prophecy series which was interesting but first time I read it it got my knickers in a knot.

Not sure about it all but yeah pretty full on.

I believe humans should all go vegan for the economy for the environment for the animals and for our health.

The wealth gap is greater now than ever in the US. The top 1% control about 67% of the wealth in the country. This is bad for the economy because the ultra-wealthy tend to save their money, not spend it on goods and services.

Democracy is more fragile than many people believe.

Yes it was a reference to animal farm but my post got deleted. I guess some mods haven’t read it.

That’s strange, I don’t see a deleted post in this thread. Usually we can see them. Are you sure that you didn’t accidentally post in another thread?

I thought it was in this thread. But maybe I’m mistaken.

Either way, to me it’s not that important. I’ve had deleted posts before.

When i was a small business owner i kinda got a glimpse of the “peasants and kings” sort of thing.

It seemed strange that id earn around 5 to 10 times what the employee would get.

Like in medieval times you had peasants that worked for very little and kings that got it all.

Now im back working for a small business but im happy so its cool.

We need a certain amount of money to not stress about bills and can afford some fun. The rest is just bonus.

That and i need like 2 mill for a house

Its ok to chat about news right admin?

Im not a political type of person but the rich made trillions out of every recession pandemic war, anything and everything

The dictatorship of the proletariat,
is the leadership of the majority
against the rich minority

the ultra-wealthy tend to save their money

I refute this statement. Only salary-based or hourly-waged workers “save” their money. The ultra-wealthy generate revenue by increasing sales of the product or services that their company offers. Then, allow financial advisors reinvest that money in the stock markets or other investment vehicles.

I didn’t mean “save” as if they’re putting their money into a savings account.

Lower taxes on the wealthy does not create more employment, consumer spending or regained revenue. In other words, the money will keep accumulating at the top, it will not “trickle down,” certainly not long term. The ultra-wealthy are not the drivers of the economy.

The wealth gap can be reduced by cutting taxes for middle-and-lower-income earners, the true drivers of the economy.