When does it usually snow where you live

It usually snows where I live, in January.

Usually near the end of October, and beginning of November.

Anytime now, maybe a little on wed they said

It could snow all year here. It snowed on the 4th of July several people have told me since I’ve been here. It doesn’t stick. There’s usually snow on the ground from December to March I guess.

We get snow as early as October and as late as May. It’s possible we’ve had snow in September but I’m not sure.

February or January here. But I don’t want snow again lol. I’m in Texas and this last winter we had that bad winter storm where lots of people lost power for days, pipes burst and people even died. My dad in laws apartment had burst pipes and it destroyed everything he had.

In the winter December/March a couple of days/weeks depending on the year.

Live far away from poles. Or snowy mountains.

Before here, I lived in LA and it didn’t snow there, either.

It rarely snows here by the sea.

As early as October and as late as April. It varies every year. I’m in Ontario, Canada. 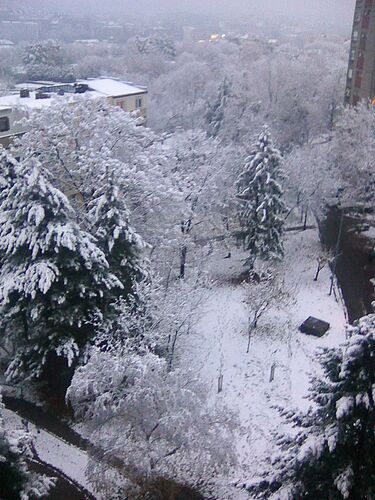 This is december, and some of last snows I saw.
Climate changes…

From November till March roughly

I don’t remember a proper decent amount since probably 2010, and that lasted about a day

Has not been that cold last few winters. Only odd few weeks of extreme