What's your schizo perspective on 'Ratched'?

Never heard of it. Is it some type of subculture?

A TV series available on netflix. 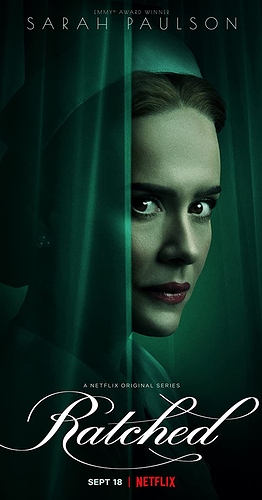 It is pretty whacko but I liked it. A few triggery moments

It’s a show by the guys who did American Horror Story. The actress in it was a mainstay for AHS. I’ve heard it’s similar.

AHS Roanoke had a schizoaffective character and it was very stigmatizing. I would have preferred they just refer to her as “mentally ill” and not name the illness.

There was this evil nurse working at the psych hospital I attended.

She injected me with a megadose of Ativan and this other unknown drug I haven’t heard of just because my blood pressure spiked up a little.

After this they called an ambulance and sent me to the ER all drugged up.

I was hallucinating pretty bad because of the injection they gave me!

She administered megadoses of drugs to many of the other patients.

I friken love Ratched. One of the first series I could actually watch all the way through for once. Highly recommend it if you like slightly disturbing shows.

I love Ratched!!! This is literally the first television show I have watched in over 30 years and I LOVE it! I’m very impressed.

Thanks guys for the input.

My folks love it. I have trouble watching tv so I’ve avoided it as per what’s typical of me.

Love the film it borrows from (and is prequel to ?)

I am surprised no one has brought that up.

I’m a sucker for the ‘juicy fruit’ moment for one thing.

Didn’t even know such a show existed. Thanks for the idea.

My brother’s recent comments about it.:

do you remember nurse ratchet from “one flew over the cuckoo nest “ ? they have made a serial about her its dark humour and may not be your cup of tea ,i liked it because it is all set in the forties and the styles are all good

Have you watched it?

I thought the sets and wardrobe and the cinematography where very well done for a series. It feels like movie quality. That’s what I thought

It’s technically 1st rate, but I just couldn’t get into it.

I couldn’t find it. No search results.

I really want to watch it. Maybe after I finish rewatching Death Note.