Here are some suggestions because no one will help me make a poll. It’s totally ok to have a male alter ego if you are female and vice versa.

I will help you!

How to Make Polls DX'd - Other

Here is how you make polls: Here’s how it works star: Single Choice (default) The simplest poll you can make is a single choice poll. You just need a list surrounded by the [poll] BBCode tag [/poll]. [poll] - Option A - Option B - Option C [/poll] 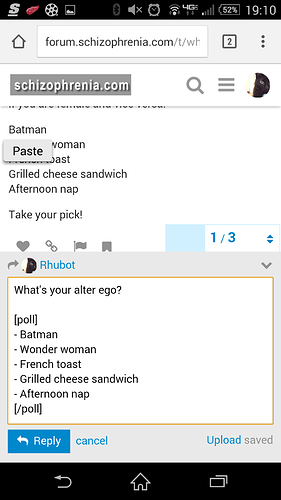 My alter ego is narcissistic.

That title takes on a whole new meaning here.

Thank you so much! No one else would and it was so annoying. I’m going to make one now

Ok, now it’s giving me lip and saying it has to have more than one option. It looks right on the right demo screen though.

Can you screencap for me?

How do you do that?

I’m no good with computers

Hmmm. How about just posting everything but the “[poll]” tags - just let me see how you’re typing them out. Often just the smallest formatting change can make it work or not.

(screencaps are harder on a computer than a phone, usually. on my computer, I would need to hit “print screen” and then paste into an image editing program. it’s a lot of trouble if you’re new to it, and there are other ways of figuring out what’s going wrong.)

Leave the brackets, btw. Just change the words inside the first set.