What's the stupidest thing you have ever seen a person do?

One time when I was in the army my best friend, his father-in-law, and me went fishing. It was cold, and we were wearing our coats. We rented one of those small, flat bottomed fishing boats. We didn’t catch anything, but while we were on our way back to the dock my friend’s father-in-law stood on the prow of the boat and rocked his weight back and forth while the boat was headed back. He was wearing a coat, a pair of boots, and a pair of jeans. The water was cold. If he had fallen into the water, which he had a good chance of doing, there was very little chance that he could have swum back to the boat. My best friend said that at first he had trouble keeping the engine in sync with his father-in-law’s movements, but he finally got him timed so that the boat was stable. That’s the dumbest thing I have ever seen anybody do.

I gave away a book i fount from the mental clinics bookshelf in the activity room. I was bored at the hospital. The book interested me. But this other patient said she wants to read it. But she was sick. She didnt want to read it. But i gave the book to her. She probably threw it in the garbage or something.

More ‘daft’ than stupid, but… This made me laugh so much… I was at someone’s house who I didn’t know well, he was a smoker. On numerous occasions I saw him light a cooks match, use the match to light the gas stove, then bend down and light his cigarette on the gas stove. Why he didn’t just use the match to light the cigarette I don’t know, but every time I remember it makes me laugh!

I fell over the edge of a highway in my car one time. That’s the stupidest thing I ever heard of a person doing.

Working at the liqour store. This guy was looking for something. I told him to turn around. He did a 360°.

me mumbling dumb ■■■■ under my breath.

By ropes tied around both their waists.

It was the most ridiculous thing I’ve ever seen.

Me falling for a tax scam. I ended up giving away 1 grand.

Just a couple of stories from a supervisor I had:

He let a car run over his foot, reasoning that the tire was just full of air.

He stepped on a pair of scissors because he saw his brother do it and wanted to know what it felt like.

I was in my Cadillac letting a drug dealer drive. I let other people drive my car all the time because I didn’t feel like driving. His friend was there too and it was nighttime and we were going down the freeway at 65 or 70 mph and the guy driving thought it would be cool to put on some sunglasses while he was driving. Both me and the other guy freaked out. It was already pitch black. I had never seen either of these guys afraid of anything or anybody or any place but the drivers friend got scared and angrily told his friend not to do it. It’s funny now but at the time it was beyond stupidity and wasn’t cool one bit.

Another stupid thing my ex friend did was run the car near empty on a road trip with no gas station for 20 miles becuz he wanted to see how much it would cost to fill the tank all the way up. 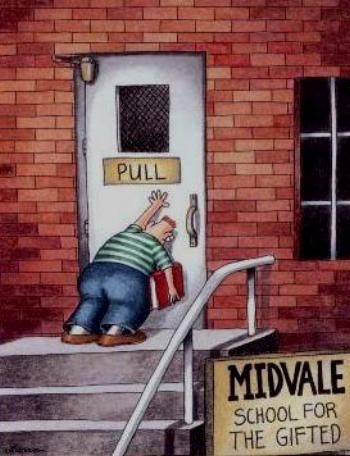 I love Gary Larson. I almost bought this T-shirt once. Instead, I got two redneck ones.

My father called the whole family into the kitchen one day to deliver a speech on not putting any metal objects into our new microwave oven. He made a big deal over it. And then, what does he do? He puts a metal pan into the microwave oven and turns it on to heat up some soup. What an idiot! He was very MI and unmedicated.

@ThePickinSkunk, he was showing you his beautiful body. LMAO.

The stupidest things i ever saw a person do were things that I did and I don’t want to talk about it.

I’ve done some really, really stupid things. There were times when I was right on the verge of catastrophe, and I escaped through sheer luck. I don’t intend to push my luck any more. I’m playing it safe from here on in.

There were times when I was right on the verge of catastrophe,

Reminds me of The Fool tarot card -

When I was 19 and in the Job Corps I had this boyfriend. We were in line for lunch and we were offered hot meal of cold meal, but we had to choose without knowing what the cold meal was. He chose hot meal. When we got to the end of the line where the cold meal was it turned out to be a sub sandwich, and he really wanted it. There was no changing your mind at that point though. So his bright idea was to stash his tray and get back in line so he bent over and slid the tray under the buffet line and started to head for the back of the line. Only problem was he didn’t bother to look around to see who was watching and did it right in front of the boy’s dorm supervisor. He got written up and had to eat the crappy lunch anyway.