I was fighting hard two games but lose both

What is the best video game genre?

The truth of the matter is that you always know the right thing to do. The hard part is doing it. — Norman Schwarzkopf

Thanks for the guilt trip.

Hi! To find out what I can do, say @discobot display help.

I’m juggling quite a lot of games at the moment. I end up playing a couple of hours (total) of 2 or 3 of these each week

DOTA 2 - easy to jump into a game. But sometimes bad teammates make me never wanna play it again lol. Have to have tough skin to play alone.
Kenshi - brutally challenging sand box game. I struggle knowing what to do but I love the atmosphere of a post apocalyptic wasteland. Made me want to write music.
No More Heroes - Flashy and very funny action game.
FFXIV - great combat with really fun classes but the main story is really long winded and sort of a chore IMO. Giving it a break at the moment
Nioh - Like Diablo X Dark Souls with a Samurai!! Very punishing but satisfying when you kill a boss etc.

I bought a game I was waiting for ages to go on sale to play about a month ago and just realised I still havnt launched it up.
Teardown.

honestly I have had way more fun with Guild Wars 2 than I did with FFXIV. like you said, ffxiv felt like a chore. guild wars 2 feels like i’m having fun while i’m playing it. It’s free to play, too, so there’s no cost in trying it out. Lost Ark is pretty good too imo. I think FFXIV is overrated. the story isn’t even that good and the lack of voice acting makes the game’s cutscenes feel really weird. i even prefer ESO to FFXIV because at least that game has fully voiced dialogue. there are some good mmo’s’ coming out soon, though. ashes of creation, blue protocol, and throne and liberty are all coming out soon. who knows when Riot’s mmo is coming out but that should be good too.

I couldn’t really get into FFXIV or Guild Wars 2. I have high hopes for ashes of creation, but I think it’s going to be at least a couple years before it comes out. Been playing wow classic a little, but not having as much fun as I did in original burning crusade.

Did you try lost ark?

Haven’t played lost ark yet, been meaning to give it a try. 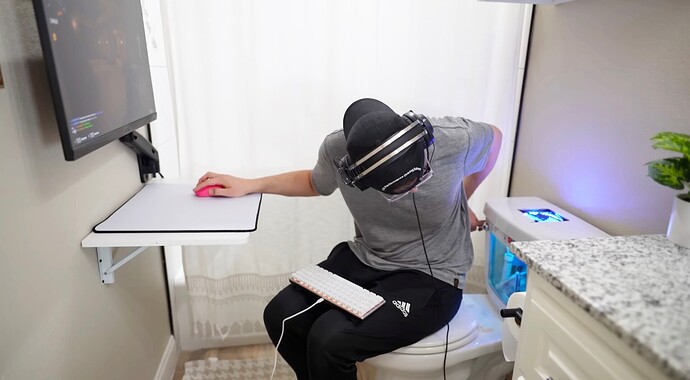 A YouTuber has taken the idea of gaming on a toilet to the extreme by converting a working toilet into a gaming computer. Based on an Intel Core i7-12700 and an NVIDIA GeForce RTX 3060, the PC build was not without its issues and hacks.

Bought Snowrunner for the Switch.

Have Mudrunner on PS4 and I love it.

Its also pay to win.
LOL sorry - I get the joke now. Thought you meant lost ark.

I played some more DOTA. Some terrible matches

Also booted up Teardown. Wasn’t quite what I hoped in terms of gameplay - but holy moly. Raytraced water looks amazing!! Seeing dynamic reflections of the surface of the water was beautiful.

So been playing a bit of skyrim and Fallout 4 and just getting to overpowered too quickly. Great games but once you finish them it becomes a bit redundant.

Just started a replay of the 2014 Dragon Age Inquisiition. It’s not a bad game although the combat is very arcade like but the crafting and dialogue is pretty good considering it’s age. I’ve finished it but years ago so just started another playthrough…it’s a game that is pretty satisfying and a lot of fun.

Please … I have tried so many I havent found on I have loved all the way yet .