Very upset. This morning I wanted to go to the shops but my bro wanted to catch the train to work. I told my dad we couldn’t go becaus of that and boy did my bro throw a fit. So bro said he’ll drive us there and wanted to teach me a lesson so drove really fast I almost had a panic attack and started crying. He said it’s ok for me as I’m doing a stupid admin job in a charity which is unimportant. But he needs to get to work on time. He said that he has a good job despite having no degree and told me how ■■■■ my job is despite having one. I am upset and don’t want to talk to him 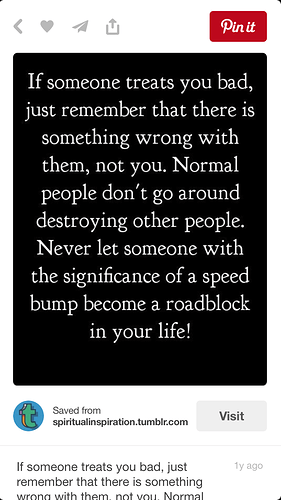 I felt pretty worthless for sometime. I know he’s done well for himself and I’m proud of him but why the need to bring me down

Reminds me of my brother a little. People like this are like poison to our souls and bodies

It sounds like your brother is going through something dark… I’m sorry he’s taking it out on you thought… that’s not cool.

But this is the second adult temper tantrum he’s had that you’ve opened up about… making me think this is a growing trend in him… It’s hard when the family starts acting out.

I hope you feel better soon… hopefully your brother will work through what’s bothering him… or at least leave you alone.

If it happens again… you might need to sit him down and talk to him.

Good luck… I’m rooting for you

I didn’t speak to him living under one roof for 10 years. I cut him off. I can do it again. He is toxic and it’s really not healthy for me when he’s like this.

I’m sorry this happening. I hope he gets over what he’s going through…

Good luck and I hope things smooth out soon.

You’re not worthless. I’m sorry to say that he doesn’t seem like a good brother. You need good people in your life. People that are there for you not people that are going to scare you and be mean to you.

I’m sorry your brother upset you. He sounds like a jerk. good luck on dealing with him your way.

People keep bringing me down on another forum I participate in. Fact is, I was a hard working citizen with a job like the rest of Americans. SZ disabled me to the point where I no longer feel safe in employment - too many physical side effects with my SZ.

So, it’s dumb. Can some mentally disabled people work? Sure, but their condition is probably much simpler, far less complicated than others to be doing such for themselves.

Don’t get me wrong, I’m proud of people who can work, but the expectation that everyone needs to be working is becoming a nuisance to my emotionality. Hardline folks would think twice if only they could feel my symptoms themselves.

I have dealt with abuse all my life from my family.

I have an Indian family too (same as you).

In the end, we have to deal with this. There’s no other go.

Let me remind you there are 1.4 billion Indians stacked up in 1 country and a fairly large number all over the world too.

And I am pretty sure in those families too, someone would have had to deal with this(abuse).

So understand that we are not alone.

They never will. Most(the Upper castes) are too obsessed with ego and money and hardly care of anything else.

Most Indians (especially the Upper castes) are dishonest, cunning, brute, and downright ---- (dont need to call that). Unfortunately that is their religion (Hinduism/Brahmanism) and their culture. They have been conditioned to behave that way and this is the ONLY WAY they feel is correct.

It is practically impossible to change them.

Hope you will forget this episode asap.

Maybe you could confront your brother with the way he made you feel. He’s being a jerk and he needs to apologize. If he won’t do that maybe you need to cut him off again, for the sake of your own psychological well being. Maybe you could give him a chance to apologize first.