I deeply disagree with the morally philistine notion that living in a simulation would not impinge on received ideas of authenticity, or even worse, the denial of the transformative power of self - knowledge (and no self knowledge is complete without an understanding of our surroundings). I can’t think of many issues more morally urgent than discovering whether we live in a simulation or not.

I can’t think of many issues more morally urgent than discovering whether we live in a simulation or not.

There are little things more important than my morning cup of tea actually.

I have similar ideas. I don’t believe it can be proved or disproved

What discovery could not be simulated itself? 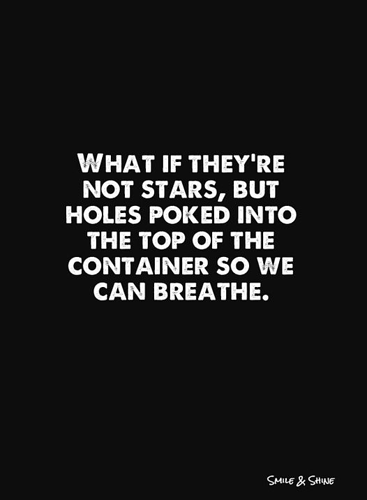 A lot of discoveries would impact our ethics though.

One thing that finally made me feel less center stage was the (and I’m gonna butcher this) but it’s that black holes keep a copy of the info aspect of what falls into them in their perimeter, their circumference more accurately.

This was my dad regurgitating what he read a couple years back, at any rate.

I spoke two days ago about how wherever we gaze at the stars with our telescopes it appears that we are the center of the universe.

But in me; with the black hole weirdness it actually takes pressure off of this feeling that we are center stage.

Does that make you wonder at all?

I don’t think I would change my behavior even if I knew this was a simulation.

Heaven forbid a small thing like discovering that we live in a simulation should ruin your cup of darjeeling.

That’s probably because you possess what they refer to as ‘character’.

I wrote about this on my blog once.

Not by us, but by them perhaps yes. What Bostrom, among others, have failed to take into account is the moral disposition of those running the simulation. I don’t see why the simulators would bother creating a world populated by beings governed by moral laws incomprehensible to themselves.

By simulation do you mean whether or not we are in a computer programme?

I certainly agree that many future developments will reshape our ethics in hitherto unexpected manners.

That would be one example.

Even if it is a simulation, knowing about it won’t magically release you from it, so there it is; we are trapped in it so try and enjoy it.

Even more worryingly, if every discovery can be simulated, how do we refute Descartes’ malevolent daimon? (Of course we can’t).

Why is it terrible?

OK, let’s up the game. I put forward 2 closely connected theses. The first one is that the Great Discovery would lead to a huge increase in the number of anomic suicides. Secondly, society would explicitly address this anomie initiating a process the outcome of which we cannot guess with our current moral intuitions.

But I’m not enjoying it.