The Strangest Thing About Schizophrenia

The strangest thing about scz is how the mind is humiliating the mind.

Nothing is more morbid than that in my opinion.

Here is a mind which is the identity of an individual both feeling the act of humiliating the self while feeling the sense of being humiliated.

What’s even worse is when it becomes predatory and stalked at the same time literally hunting itself as in each emotion and thought including actions from the body and seeing, hearing, as well as body heat, spasms, and pains.

Nothing is more strange that being your victimizer and being the victim of yourself at the same time.

Once you have lived through this morbid reality, I don’t believe that what is ordinarily morbid for most people holds a candled to all of this.

The question, “when a tree falls in the forest, and there is no one there, does it really fall,” takes on a whole new meaning such that for the schizophrenic when you are brutally beaten, stalked, eaten, raped, molested, aggrivated, angered, and even synthetically or virtually killed via various violent means, and there was no one there except in the informational world inside of the mind, did it really happen?

Just look how panicky Skhizen Phren people are. Why? They are from that informational world where those things happen all day and every day, so they in that informational world are trying to survive it not different than how a video game player is doing so in a simulator, but in the Skhizen Phren game it’s really feelings, real pain etc. When you get raped, it’s real. When you get eaten or chopped up, it’s real. You feel it to the fullest degree, and then it’s over and done. No physical injury or anything like in a video game.

But Skhizen Phren is not a game you can just get out of.

You can get good at it, and that requires a lot of active work and integrity on your part in order to turn the tables on that game if that is something you could muster. And why not? You are free to be imprisoned in your information world of your mind as much as you are at liberty to try to experiment and control/dominate it.

Technically no mind is other than an information world. When any person sees me, they have a synthetic version of me in their data, but they have no me. I don’t truly have color. Color is something that their brains create for example.

The difference for the normies and the scz’s is that they have a mental proprioception barrier which is a mental faculty. It has a real sensational experience that is distinct, but the fact is human beings have a problem in this area at large and have done so for thousands of years. It’s a major pursuit of human kind to be able to distinguish inner self information from the external information, never mixing those up, or at least as little as possible, and still it is never 100% proof positive.

But usually at will they can simply actively return to that mental proprioception faculty, and draw a line. We scz’s cannot, so we must live both by the rules of the external world and by the rules of the informational world inside of ourselves, and as ironic as it sounds it is the first priority to survive the inner one before the outer one.

When I say playing the inner game and surviving the inner information world I don’t mean crazy magic, cult, fake sci fi ideas which is going to make you “lose” that and everything else in your life in the external world here and now. So never fool yourselves into thinking that ESP, telepathy, other dimensions etc are going to ever bail you out, BECAUSE THEY ARE NOT.

What I’m saying is that if you know the rules to the informational world such as how logic works, how to systematically categorize such as in ontology, how to learn, learning how the psyches work both yours and the rest of the worlds when they are immersed in 100% information, and enhancing your informational processes such as your skills and perception aptitudes.

If you don’t have logic nor the information phenomenon at all, and you can’t self develop your knowledge, skills, and perception aptitudes, then you can not win this “game” if you can call it that. It’s a deadly game, and the stakes are high. In my experience it is like dying not a quick death but a prolonged one for decades like being graded down a hard paved road across the continent.

But if I don’t know the first thing about surviving and self making in the real world, then I’m toast in the information world. If I don’t know the logic, information, how that is what is necessary to make mental faculties’ sensation experiences, and that this radio brain is a complete logical fallacy that can be proven all day every day until the end of time, then no way can I make way in this game. I will have CPTSD (Chronic), and…

I don’t have CPTSD because I know the rules to the real life game and the informational game inside me.

I know what the humiliator and the predator are inside of me. They are my mental faculties run amok on an informational and logic basis. It is me, and I am skhizen, so in a way I’m multi-me if it were which is not to much different than how others see their own mental faculties or when someone is focusing on a person when in fact they focus on a synthetic representation of the person in a color which no person is except in the informational world of the mind. That person is both oneself informationally and the other person being focused on synthetically and informational (not literally).

The interesting thing is that when I know these things, and I practice manipulating them like a ball of dough I’m preparing to make food with, I tend to see other people this way, and I can see when they are skhizen and fooled by the things that have deceived me for years. That’s not to say that they can’t just think their way back to proper mental proprioception sensations, so that they redefine the edge between what is of themselves and what is of the external world, but like I said before no human being does not have to actively manage mental proprioception all life long. They simply have better faculties for doing it while we scz’s do not, and all of their memories reflect that ability thus shaping their personalities accordingly while our personalities are shaped according to the lack of a mental proprioception faculty.

For me personally my mental proprioception is logic and knowledge, and I have to deduce it from that. Most people just have to resort back to their memories about what is only their imaginations and what is the edge of external reality when they and others together had chartered all of that out, or the simply use their inductive reasoning skills which is simply focused sense of the here and now through the external senses.

I would say that the advantages of having no mental proprioception faculty are things like the need to know and self development. A crew aboard a boat may row a little here and there, but not very hard or much. A crew aboard a burning boat where they fire is literally scorching them will row harder, faster, and longer than anyone they’ve ever known in their lives. They will make record times. The same is true of soldier that learn combat skill in training vs. the ones that learn in actual combat. The second ones always beat the first ones.

When the pressure is on, then you work and you learn, and you try it again with what you have, and you repeat the process.

Due to missing simply one mental faculty that is what the benefit was.

My father is missing the color green. He sees gray in its place. There is no advantage for missing that mental faculty. 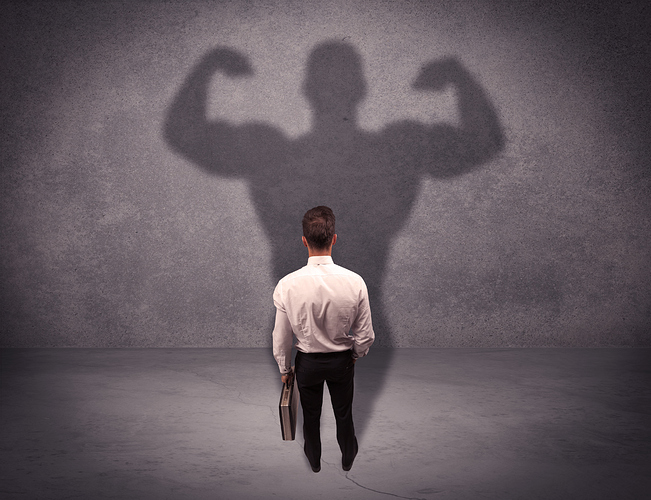 Mind is so big that you can put entire planet with life in it and it will fit there.

So creating a new world in your mind is no problem for a human. Just hope its a beautiful world filled with bees and birds and jungle forest.

Mind is so big that you can put entire planet with life in it and it will fit there.

So creating a new world in your mind is no problem for a human. Just hope its a beautiful world filled with bees and birds and jungle forest.

I’ve believed that for a long time, but I’ve never read or heard another person say it.